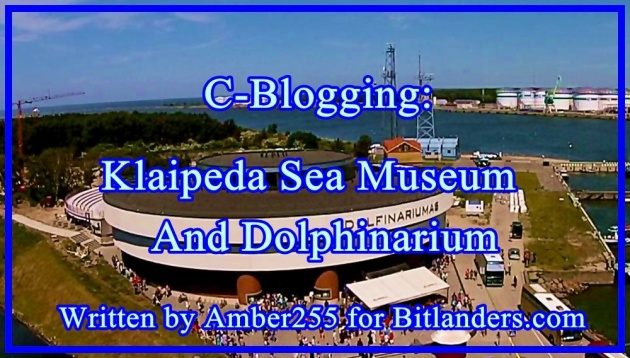 I always had sentiment to everything that relates to the sea. Maybe because my roots come from there, and many days of my childhood are spent watching the ships and seagulls swinging around the ferry, going to Smiltyne. I was even more fascinated by the Sea Museum.

For the first time, I entered the museum being a child through the back door, because my parents' buddy worked in the museum and allowed to see the sea lion's feeding close by. For me, a little child, this has left an indelible impression that has survived to this day. Later I visited this museum more than once. But the first impression always is strongest.

True, in recent years it has been both physically and morally outdated. That's why I was very pleased to hear about its reconstruction's work, and I was looking forward to the opening with impatience. It opened its door again in 2017. And now, when it changed its appearance, its expositions, I want to introduce to you our Sea Museum and Dolphinarium.

I invite you to chat with me in Querlo Chat and get familiar with Klaipeda Sea Museum and Dolphinarium that is the biggest of such kind in The Baltic region.

The museum is located in a very picturesque place on the Spit Fort. It is an old historical building. It is not accessible by land. To get there, you have to use the ferry, but this makes the journey even more fun. Especially for children; it is a fun attraction for them.

After the visit to the Klaipeda Sea Museum, after you get acquainted with many expositions, when visited a tunnel under the water, let's go for an even more enjoyable adventure - watch the sea lions and seals' performances in the outdoor pools.

Don't forget to stop by the Penguins' location - they meet you at the entrance and exit. And after you leave the museum, it is necessary to visit dolphins shows that take place in another building. It is an awesome show, and I know you will bring home the mountain a good emotion.

Now, let's chat with me on Querlo Chat for more vivid information about the Klaipeda Sea Museum and Dolphinarium:

Do you know how special are those lovely dolphins? While most wild animals avoid contact with humans, wild dolphins, of course, are extremely fond of playing and communicating with people, especially children. Young dolphins enjoy playing around the boats, surfing, and even helping the fishermen by giving the signs when the nets fill the fish and it's time to pull them out. So, that is not a surprise the fact about using dolphins for humans' treatment.

Our awesome dolphins help the psychically ill children. There is such Dolphins Therapy. Many who used it say that it helps.

In summary, I can say that the museum is really interactive: there are many different information and touch screens consoles with various games and questionnaires. There are also game-type touchable exhibits that, as I have seen, the kids really enjoyed.

So, is it worth to go to the Klaipeda Sea Museum? Ticket price is 10 euro for adults and 5 euro for children. Decide you.

"C-Blogging: Klaipeda Sea Museum and Dolphinarium" is written in support of bitLanders' C-blogging. I invite you to add your contribution to C-Blogging too.

Thanks for chatting with me at Querlo; see you in next C-blog.