Can the Galaxy S6 and iPhone 6 survive boiling water?

It's pretty common to see crazy YouTubers perform cringe-worthy drop tests, blend tests and even gun tests on new smartphones, but a boiling water test? On the iPhone 6 and Samsung Galaxy S6, two phones that aren't even water-resistant or waterproof? Now, they're just grasping at straws. 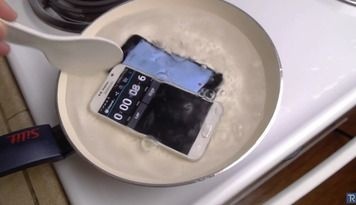 We're not sure what possessed YouTube user "TechRax" to do a "boiling hot water test" on the two best smartphones out there. Whatever the reason is, the results are in: It took 10 seconds for the iPhone 6's screen to turn black and destroy itself. The Galaxy S6, however, powered through a little over a minute before it started to overheat and shut down apps.

At the the midway point, the YouTuber then takes a cooking utensil and smacks the phones around. Um, OK...

And as if cooking his smartphones wasn't ridiculous enough, the YouTuber then rinses them off in a "cold water bath." The Galaxy S6 doesn't turn on, but the iPhone 6 somehow manages to display its Apple logo, although it wasn't able to boot-up.

The lesson here? Don't boil your smartphones. Stick to eggs. Also, don't try this at home. It's a waste of two great smartphones.