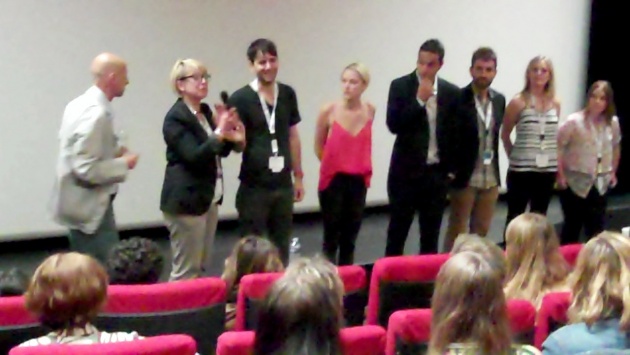 Pictured: David Robert Mitchell (third in) and crew take questions from shell-shocked young crowd at Cannes Cinephiles screening of IT Follows, 18 May 2014

The Critics’ Week (Semaine de la Critique) at the Cannes Film Festival has taken over from the Directors’ Fortnight as a reliable barometer of quality. Whilst during my 24 hour assault on the festival (18-19 May), I didn’t catch any masterpieces – and certainly not the main festival fare which is out of bounds for those without accreditation – the films in the Critics’ Week did offer, even at their worst, aesthetic pleasures – an ambition to be different, to emphasise ‘truth’ or ‘style’ but not both in the same package.

IT FOLLOWS, a modern horror film from emerging talent David Robert Mitchell, is in the ‘stylish’ category. It begins in the early hours of the morning – dog-walking time - with a commanding 360 degree pan shot showing a teenage girl flee a house in the middle of suburbia in her nightgown. In the same single-take scene, as she backs away, a neighbour asks if she is all right; the girl is unable to describe what is happening. Off screen, her father calls out to her; she re-enters the house hesitantly, then rushes out again seconds later to take the car, getting the heck out of there.

Can Mitchell sustain such bravura staging? Actually, no! The girl drives to the beach, talks to her dad on the phone, says ‘no matter what happens, I love you’, then ends up as a contorted corpse (gory make up effects courtesy of Robert Kurtzman, who is best known for similar services to FROM DUSK TILL DAWN, the Rodriguez-Tarantino combo). I was reminded of Orson Welles’ TOUCH OF EVIL. It has a bravura single take opening establishing a border post and introducing the characters played by Charlton Heston and Janet Leigh, then a stock shot explosion. Everything after that was bound to be disappointing.

The synthesizer soundtrack that accompanies IT FOLLOWS, a waning sine wave, a dribbling descant, squall it what you will, gives the movie a 1970s vibe. Think HALLOWE’EN the original. The gimmick of IT FOLLOWS is that for much of its length, we don’t witness on-screen violence, only the after- effects. Mitchell generates suspense from anticipation

Our scream queen here is Jay (Maika Monroe), short for Jamie, who has – she thinks - a real hunk of man in Hugh (Jake Weary). They have a date at the movies, only Hugh gets scared. It is not as if the theatre is only playing Adam Sandler pictures, or something, rather retro flicks for cinema’s golden age – which for me is the 1970s, but for most academics the 1940s and 1950s. This experience does not dissuade Jay from Hugh; they have sex in a car, which is a teenage rite of passage second only spilling ice cream on your crotch and being told, ‘what’s the matter, could not keep it in?’ What happens next ought to put Jay off boys for life. He puts her to sleep with chloroform and takes her to an abandoned car park, tying her to a chair where he explains he was cursed. You see, he slept with a girl and suddenly found himself pursued by apparitions that take different forms. Only he can see them. If the apparitions touch him, he’s dead. The only way he put some distance between himself and the curse is to pass it on through sex; that person should pass it on, and so on. Ideally, you should pass it on to someone who is taking a one way trip to China. The spirit thingy has to walk back to catch them and how is it going to do that?

At least one reviewer has described the film as a metaphor for STDs, which as I know from watching a recent episode of BROKLYN NINE-NINE means ‘Save the Date’. However, it is more like a chain letter. The dilemma for Jay is: who is she going to sleep with next? And why didn’t she know that Hugh’s real name was Jeff. She would have never dated a Jeff; they’re not phonetically compatible.

With the help of her friends, Jay tracks down Hugh for a High School year book. If you are a serial criminal and want to avoid being caught, try to avoid the High School year book, which can help others locate your address and ask awkward questions – was he really the boy most likely to take up knitting?

On the choice of her next sexual partner Jay has to choose between a super hot boy and a creepy guy who has known Jay forever. Jay picks the super hot guy because he can cope. (Yeah, right!) The rest of the film is about outrunning the apparitions. There are even more 360 degree pan shots and synthesizers reminding me of the beauty of wind (instruments, that is). But I started to get incredibly bored.

There are some hair-rising visual effects, by which I mean hair is raised, and teens get thrown around a bit. The internal logic creaks. As with many other teen horror films adults don’t play a super-huge part in the story; I expected at least a guidance counsellor might turn up (‘your hormones are real uppity right now; they make you unable to distinguish imagination from reality’. ‘I thought ‘Jersey Shore’ did that.’)

An audience of young people at the screen I attended really embraced the film. Call me an old fuddy duddy – really, I’m used to it – but I felt it was missing a further twist in the second act that might connect Jay to the first victim. So I cannot see IT FOLLOWS being a crossover low budget indie horror hit.