Carrie Mathison: Case two in the study of a great character

In the following discussion I draw reference to Richard Walter's arguements that make a good character in a screen play as per the blog by Amelia Nakone.

Carrie Mathison is the female CIA agent and the main protagonist in Homeland and a very unlikely one at that. She suffers with Bipolar Affective Disorder which she keeps secret from her superiors because it is incompatible with the requisites to hold a position as a CIA agent. She secretly receives Clozapine (which is an antipsychotic medication) from her elder sister who is a psychiatrist. Already she evokes audience sympathy. She is female and bipolar, so is the exact opposite to a stereotypical CIA agent.

Homeland co-creators Howard Gordon and Alex Gansa initially pitched the show to conventional TV networks with Carrie Mathison being a rather straight-laced CIA officer. Once it wasn't picked up they moved on to pitching the show to the cable channels where they made Carrie’s character more complex and flawed. She was given bipolar disorder and made more unreliable. Showtime eventually secured the rights to the show and embraced the unstable protagonist. This little story is quite revealing and underlines the willingness of cable TV to be more broadminded (hence why we are seeing such a wealth of good quality modern cable TV shows) but more importantly, the attributes needed to make a protagonist interesting.

Indeed, Carrie Mathison is deeply flawed with her mental illness, and her judgement at times is so impaired that she herself is uncertain whether to trust it. This is her almost insurmountable flaw in her quest to firstly prove that a rescued US marine platoon sergeant, Nicholas Brody has been “turned” into  a “sleeper cell” during his years of captivity by Al Qaeda as a prisoner of war in Iraq, and then to capture the Terrorist mastermind, Abu Nazir. Carrie starts her journey as a  field officer in Iraq and gains information about an American who has been turned, but she is reassigned to the CIA Counterterrorism Centre in Langley, Virginia, where it so happens that Brody has returned to civilian life hailed an American hero. Here she tries to gather surveillance information about Brody to prove her supposition that he is the one that’s been turned, by her own unauthorized surveillance operation. In the process, bizarrely, she has an affair with Brody, underlining her dubious judgement. Further, she has an exacerbation of the mania following a bomb blast. This leads to insomnia, pressured speech and a succession of rapid thoughts that paradoxically, give her the genius and insight to make all the connections between Brody and Abu Nazir. Unfortunately it also lands her in the mental hospital, and leads to her losing her job as a CIA agent. To make matters worse, by now she has entered the depressive phase of bipolar disorder and has lost faith in herself and succumbs to advice to be treated with Electro Convulsive Therapy (ECT).  ECT is known to lead to short term memory loss so she will lose the one memory of Brody's sleep talk one night during their affair connecting Brody to Abu Nazir’s son.

I digress for one moment, and add the point that ECT is a very controversial treatment of mental illness and is well known within medical circles as a way to “fry patient brains”. The damage that it does in my opinion out-ways the risks and it should only be used as a last resort. Remember that only a short 60 to 80 years ago a procedure known as the Frontal leucotomy (famously termed frontal lobotomy) was widely used to treat psychiatric illness. I hope to explore this topic in a future blog.

She is a complex yet endlessly interesting mix of attributes. Firstly she finds herself in a male dominated environment, particularly on the ground in the Middle East, where she has to change her blonde fair complexion appearance to blend in with the Arab world and also amongst her male peers in Langley, Virginia. Her mental illness clearly holds her back yet at the same time the manic phase of this illness gives her the superhuman mental energy to make brilliant observations and mental connections. Conversely, this same mental state can also destroy that very brilliant mind. She is a character almost seemingly on a perpetual high altitude tightrope, only standing aloft by the narrowest of margins. 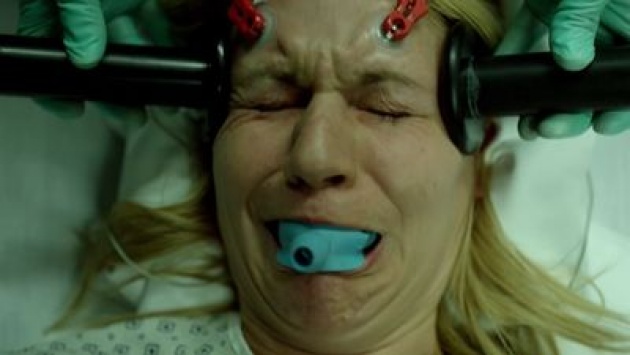