It has been four days since my husband James and I visited Casa Gorordo and yet it feels like everything that we had seen there is still fresh in my mind. Although I have originally thought of writing one single blog about this place, I somehow ended up writing three and that is because I had so much things to say about it. I don't really want to publish a three thousand word worth of blog, that would be penalized by Miss Hillary for creating a very long story. Thus, splitting the blog into three was the best solution.

Anyways, the first two parts of this Casa Gorordo blog was about the history of the house and the things to be found at the ground floor of this historical spot within Cebu City.

While Cebu City is a busy city, when James and I came to Parian that day, we noticed it to be quiet and peaceful. Just a few meters away from Parian is actually the busiest street in the city - Colon yet Parian has remained to be a calm one compared to the former. 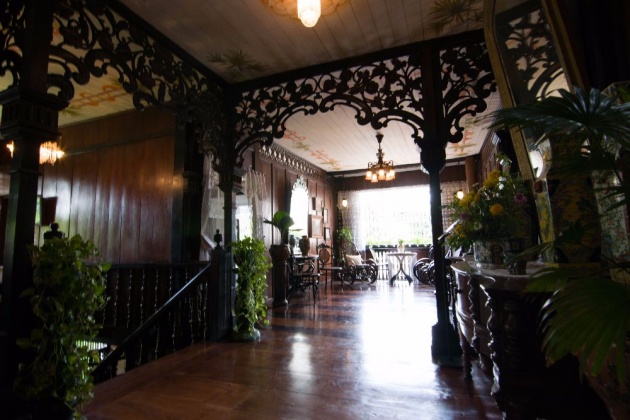 Today's blog is about the second part of the tour which showcases the second floor of this two-storey house. This is an interesting part of the property which has been very accustomed to a variety of culture and beliefs of the Filipino mestizos.

Unlike the lower floor which was made of coral stone blocks, this part here consists of wood but of those type which were strong and yet flexible enough to sustain typhoons and earthquakes. Perhaps this is the reason why the house had survived the World War II and the other revolutionaries.

Now, let me show you what is in store for us at the second part of the house. We ended up at the descanso area at the ground floor where the visitors usually stay while waiting for the family member to invite them up to the upper floor.

To get to the upper floor or "Taas", one has to use the stairs and way back during the 1800s, a house's staircase usually was design to compliment a family's status in the society. The more prominent, the bigger staircase.

At Casa Gorordo, the shiny wooden staircase was spacious enough for around four or five people to walk together side by side. This signifies that in terms of social status, they belong to the upper class of the community perhaps because they also have a bishop living in the same roof.

Its staircase has around 15-20 steps, all shiny and clean. This was the original staircase so one can say that this has been taken cared of and the materials used are very sturdy.

Once we reached the end of the stairs, a huge Venetian mirror welcomed us with matching pictures of different subjects such as the family members, certain landscapes and exotic floras. 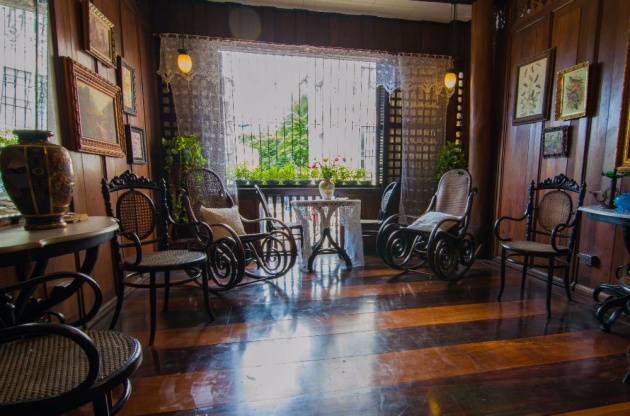 A huge painting of the Spanish merchant, Juan Isidro de Gorordo who was the original owner of the house is hanged at the wall in the formal sala.

This spot here is the formal receiving of guests area. After waiting at the descanso once a family member asks the visitors to come up, they'll be entertained in this area. A large window makes it possible for the entire household to have a view of the things happening in the street.

This is also where Juan Gorordo, the first Filipino bishop of Cebu stays when he comes home. One thing I missed though is to check out his copy of the original Noli Me Tangere by Jose Rizal.

This is the largest bedroom in the entire house. Here's where the owner of the house together with his wife sleeps. It has been designed in a way where he has a view of every section of the property. 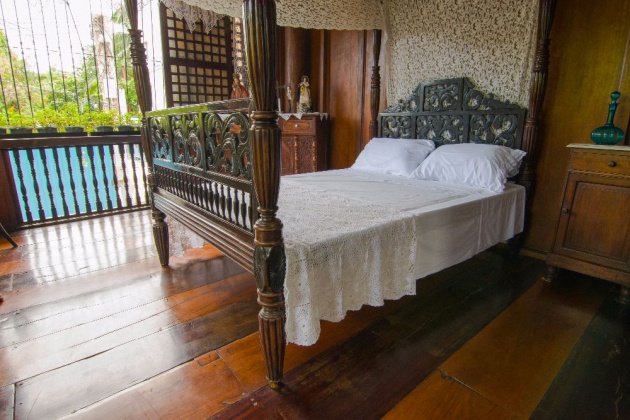 Its large windows make it possible for him to see what's happening in the streets at the bed's right side. At the front side of the bed has a direct view of the lawn so he can see what the house helpers and even the members of the family are doing. Plus he also has a small secret door which has access to the suitor's table, more of that later on.

The bed here has been covered with white linen sheets and white pillow cases too! A very intricate designed head board also compliments the room's cabinet design and the mirror.

Here's another intriguing room. This is where the newly wedded couple of the family stays. It has the usual antique bed design, white linens and comfortable looking beds. I found the powder table really unique with its moon shaped mirror. 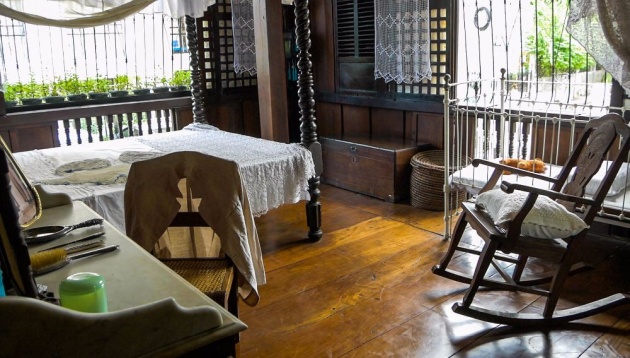 But what's really interesting was the fact that when a couple gets married in this family, the elders and the rest of the family members would stay at the formal sala which is just next to the lover's room so they can hear what the couple are doing.

The catch was the day after the first night of being married, the elders such as the parents or grandparents of the couple will then check the mattress for any blood stains. If there's blood stain that means, the bride was a virgin and it is a proud moment for the family. If there aren't any blood stain, there are two cases: either the bride was not virgin anymore or else nothing happened.

This belief was influenced by the Spaniards though. It was a big deal for women to be virgin when marrying someone during that time.

I find it funny but this was real, it happened before and I totally believe this is also the reason why the conservative Filipinos are still applying this. 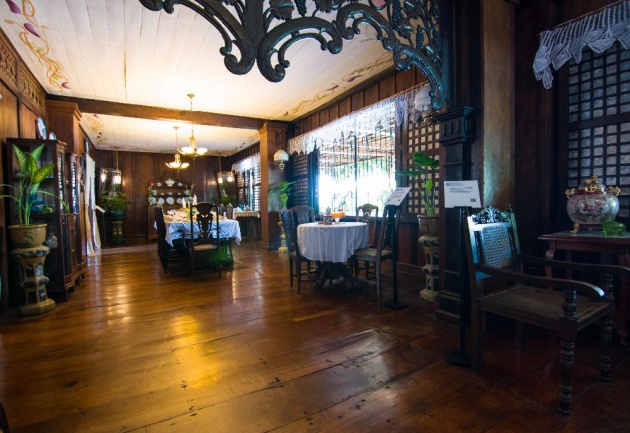 Beside the master's bedroom is a corner with a table and chairs which was intended for suitors and the women in the family stay while the young man would narrate his poetry products or else, he can play and sing too in front of the woman's family.

I learned that during those days, it was a total discouragement for a man not to learn his guitars and if he would have a mistake during he presentation, it would be a total turn off.

As we were going to the next room, it was worth noting the work of art piece of the separator between the formal sala going towards the dining table. But we were all surprised to see a table which was not the normal height of a dining one. 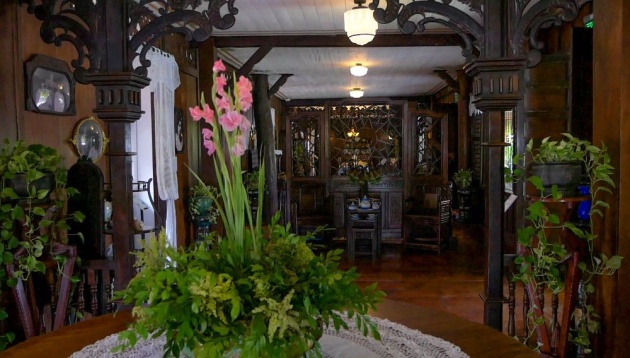 The elderly who was together with us during the tour curiously ask if that was for dining. Ren, the tour guide went back as he was ahead of us and told us this was a gift receiving table. All of us were astonished! We didn't know that there's this kind of table in a Filipino tradition but perhaps that was an influence by the Spanish culture.

The table has been accessorized by a crochet, perhaps made by the ladies of the family. Crochet stuffs are all visible in the entire house. From the bedsheets, to the pillowcases as well as the curtain of each rooms to the tables. Somehow reminded me of my grade school teacher's house.

Perhaps the unique piece of this house also lies in this specific room which was an old children's room turned into a chapel by the first Bishop from Cebu, the fourth generation, Juan Gorordo. Whenever he is in Cebu, he usually handles mass here inside his home together with family and relatives as well as close friends. 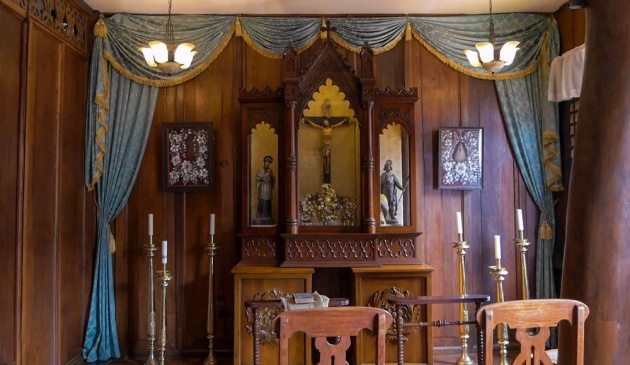 The artistically painted ceiling is still there, as per Ren, they were painted by Argaonons. There are proofs of Filipino artistry and craftsmanship inside here such as the frames which have been decorated with shells. The long church chairs as well were intricately carved by the locals before.

Everything inside is originally from the family except for the altar which the family brought together with them when they left the house.

Then we reached the long dining table of the family Gorordo, I had been eyeing that since we reached the second part of the upper house. The plates and utensils here were imports as Cebu was a trade hub during those days. The table can accommodate around ten adults while children were usually separated to another round table a distant away from the main dining. 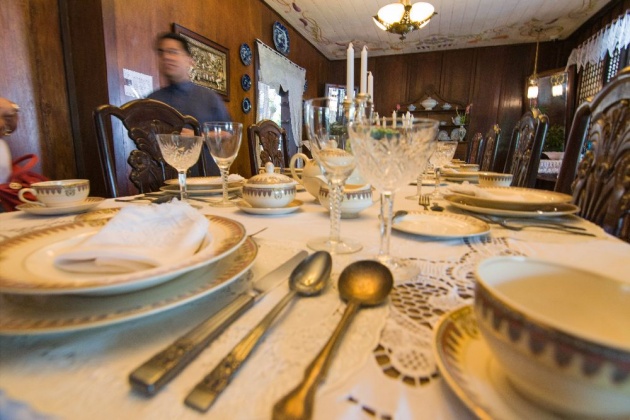 There was a saying before that children should not interfere with the businesses of the adults thus the separation. However, it seems like this is not anymore visible in the current Filipino setting.

One worth mentioning here was the presence of an antique Japanese cup with a painting of a Geisha inside a cup. The face can be seen when the cup is turned upwards, there is a carving in the cup itself which creates this painting effect when turned upside down. It was really amazing.

At the kitchen, there was a common Filipino item, the "Kudkuran" which is actually a coconut scraper. The tree used in it is very sturdy that this still is functional until now however, they had preserved it and using it is not allowed. But note that we still use a similar one back at home. 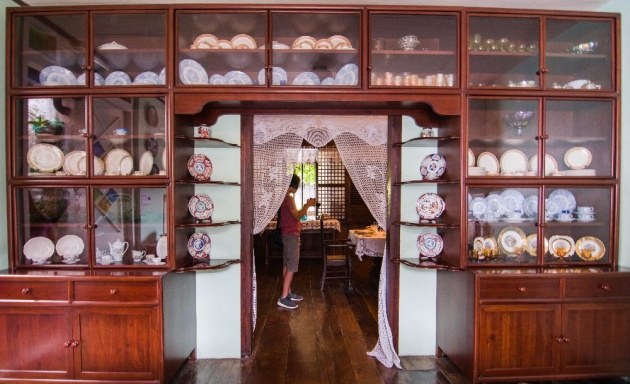 The kitchen contains the Gorordo family's collection of silverwares nicely placed inside those transparent cabinets. Although, the kitchen has been renovated already because part of it was destroyed during the war. The kitchen was originally having the common Filipino dirty kitchen look. They used wood for fire and they use clay pots for cooking.

At this point, tiles were added to keep this area clean and neat since this has been already turned into a museum.

We made it to the end of the tour, the veranda is where certain activities were done by the family such as washing clothes, rope making and even having siesta time. Today, there were wood and bamboo made butaka or chairs. There were also pots and vases displayed in here. 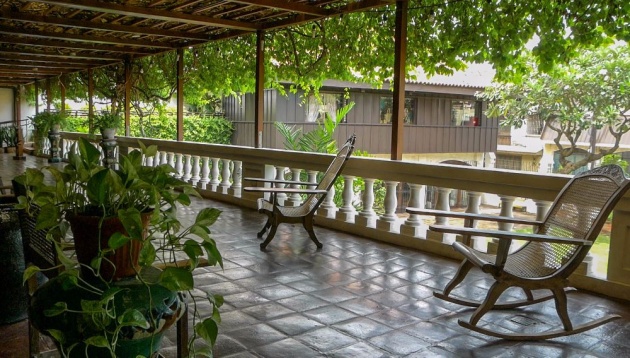 From the veranda, the large sliding windows were making it possible for everyone to see what's inside the house. There were also crawling plants in its ceiling which gives it a cool and fresh feeling.

This also led to the museum's Souvenir Shop and cafe.

There were QR codes available but we were not able to use the tablets though because Ren was able to explain every detail of the house. The Tablet should show us more information of the parts of the house as soon as we scan the QR code.

Truly this museum offers a unique tour experience and an educational one that every Cebuano and even Filipinos from other provinces should pay a visit.