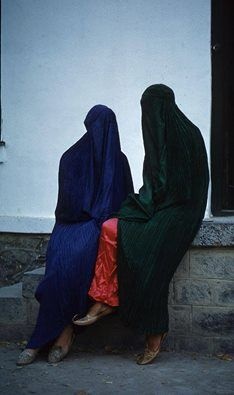 The Afghan chadari, or burqa as it is also known, has become a global icon,

but particularly with the period of Taliban influence in Afghanistan (1994–2001).

For many in the non-Muslim world the chadari symbolizes the oppression of women.

Some specialists in Afghan history insist that the garment should be called a chadari,

not a burqa, the Arab name that seems to be associated with Islamic fundamentalism....

The early examples of chadaris and burqas seem to have been made of cotton of varying qualities,

or less frequently, silk. The first synthetic chadaris appeared on the market in the late 1960s,

and by the mid-1970s they had become widespread. In the late twentieth century

the choice of color began to indicate the origins and religious beliefs of the wearer.

In 1996, immediately after the fall of Kabul to the Taliban, Radio Kabul announced that

women had to cover themselves completely. Those who did not risked being beaten.

The new Taliban dress codes caused severe problems for families who could not afford a chadari.

Although the Taliban were (temporarily) suppressed in the first decade of the twenty-first century,

the political and social role of the chadari as a global icon representing Muslim women and Islamic fundamentalism continues."

Dubai is a city in the United Arab Emirates known for luxury shopping, ultramodern architecture and …