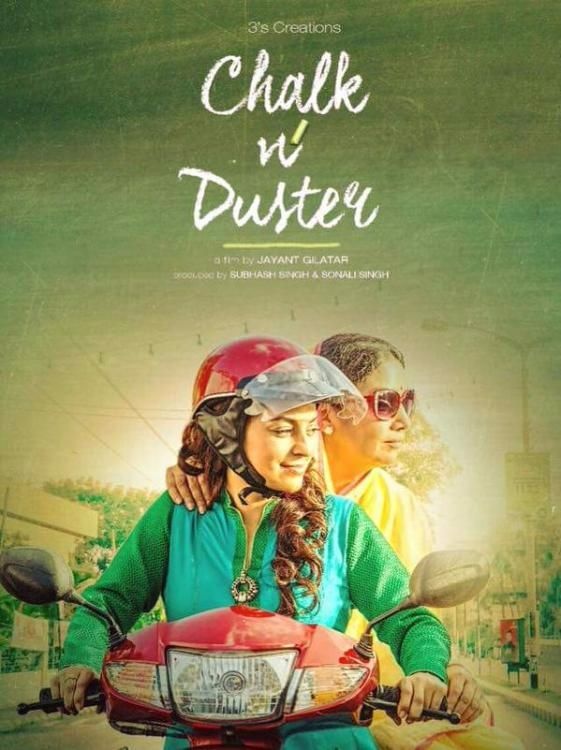 The movie targets the teachers, students and the education system, giving out a socially relevant message, in-spite of being an out an out commercial film. It is a coming of age movie that deals with the life of teachers. The movie endeavors to bring to light, the plight of senior teachers who strive hard to hold their ground in an age where the notion of permanent job has gone obsolete.

The music is composed by Sandesh Shandilya, while the lyrics for the film are penned by the seasoned Javed Akhtar. The movie is produced by Subhash Singh and Sonali Singh under the 3S Creations banner. The movie is co-produced by Amin Surani.

'Chalk n Duster' is hit the marquee on Teacher's Day, 4th of September.

Chalk n Duster is an upcoming Bollywood movie. This film is all about teacher and student's communication. It highlights the problem of teachers and students where teaching way in the education system is changing day by day. Juhi Chawla, Shabana Azmi, Zarina Wahab, Girish Karnad and Divya Dutta playing the lead roles. Movie is Directed by Jayant Gilatar, Written by Ranjeev Verma and Neetu Verma and Produced by Amin Surani.

The film is an emotional journey of two teachers Vidya (Shabana Azmi) and Jyoti (Juhi Chawla), serving at a Mumbai–based high school. Their passion and love for teaching, bonds them in a special relationship with their students. Their gratification is good grades, moral values they strive to impart to students. However, in an evil turn of events, a wicked lady, Kamini Gupta (Divya Dutta) gets appointed as the principal, thus changing the fate of the administration.

It looks like the season of women empowerment will continue into the next year. If one didn’t know better one would say Chalk n Duster is Angry Indian Goddesses Part 2.

If the trailer is any indication, every woman protagonist, from the formidable Shabana Azmi to the rapidly-evolving Richa Chadha seems very angry. Even Upaasna Khosla the comic actress from Comedy Nights With Kapil seems pissed off as she gets to plant a resounding slap on Ms Azmi’s cheek. Quite a historic moment.

Ms Azmi plays a dedicated teacher named Vidya Sawant, who is hounded and sacked by an evil principal, played by the very talented and under-used Divya Dutta, in short hair to prove she’s vampish. The unlit cigarette clutched in manicured fingers is missing. Maybe after school hours?

The film’s approach to the theme of spreading the light of education seems heavy-handed with a melodramatic confrontation between the dedicated teacher and mercenary establishment.

What rescues the trailer from didactic drudgery are the actresses, Juhi Chawla, Zarina Wahab, Divya Dutt and above all, Shabana Azmi, who is doing what she does best — playing a part with a strong social message on the important of honesty and dedication in the teaching profession.

We haven’t had too many films on the teacher-student relationship since Aamir Khan’s Tare Zameen Par. Even ifChalk n Duster depends blindly on women power to put across its message, we are game.

Even the giant academician-actor Girish Karnad playing Shabana’s husband(interesting casting, that) is reduced to a shadowy figure who apparently loves Sachin Tendulkar’s batting.

The trailer of the new Bollywood movie ‘Chalk N Duster’ has been out a few days ago. As per the movie ‘Chalk N Duster’ trailer review, it looks a very nice movie. This movie will surely get good comments from the critics. The trailer looks very interesting. As it is a very small budget movie with not a very strong cast, so it is not expected to get a good amount on Box-Office Collection. The movie is supposed to be directed by Jayant Gilatar. The production department is under Amin Surani. Let us see what the movie have at Bollywood Box-Office collection.

Firstly, let us talk about the starcast of the movie, which contains the great actress Shabana Azmi as the main lead in the movie. Actresses like Juhi Chawla, Divya Dutta and Upasna Singh too has very strong roles in the movie to play. Arya Babbar will also be playing a major role in the movie as well. We will also see Rishi Kapoor, Jackie Shroff and Richa Chaddha in guest roles as well. All in all we can say that the movie is female centric. The movie is expected to hit the silver screen on 15th of February 2016.

Let us now tell you about the story of the movie ‘Chalk N Duster’. As per the ‘Chalk N Duster’ trailer review by Bollyvision, the story seems to be revolving about the emotional track of two school teachers which are Shabana Azmi and Juhi Chawla. These two teachers are working at a school. Both of them are so much passionate about their profession of teaching and also get a very strong bond with their students as well. They serve good teaching and great values to their students to have their students a very bright future. But as soon as the administration is handed over to a wicked lady Divya Dutta, the whole story changes.

The lady tries to impart her own rules over the school and teachers. Which turns the life of these two loyal teachers. The lady who is appointed as the principal of the school changes the way of administration. Let us tell you that as we have Shabana Azmi and Juhi Chawla in the main leads and both the actress are very strong artist, so we will definitely see some power pack performances by both of them. Even, Divya Dutta will also be seen in a very tough role as well. Well, we hope the best for the movie.

ve time national award winner Shabana Azmi, very selective when it comes to do a film, will be seen as a Marathi teacher in "Chalk N Duster" which she says is a film well within the ambit of mainstream cinema.

On a location shoot of an important sequence of the film Rishi Kapoor here on Friday, Shabana told media persons that "Chalk N Duster" is mainstream cinema. "I want to emphasize 'Chalk N Duster' is within the main stream cinema. There is lot of entertainment and a human story which is being told about these two teachers."

"One of which is played by Juhi and one is by me and is about what teachers have to go through because of the machination of the character played by Divya Dutta. So I think this film will provide entertainment as well as food for thought," she added.

Asked about the inspiration for her character, Shabana said: "I have so many favourite teachers but none of them were like the person I am playing in the movie. I have a bhabi who is an actress named Sulabha Arya and I have based my character on her very closely."

Sulabha Arya is the famous Kanta ben from SRK's film Kal Ho Na Ho and ex-wife of cinematographer Ishan Arya, whose first cousins are Shabana and Baba Azmi. Presently Sulabha Arya is busy with TV show Begusarai where she is playing a very important role.

DID YOU KNOW??? Music Can Makes Life More Healthy

Listening to music is not just mere entertainment. Without you knowing it, the music actually has mo…