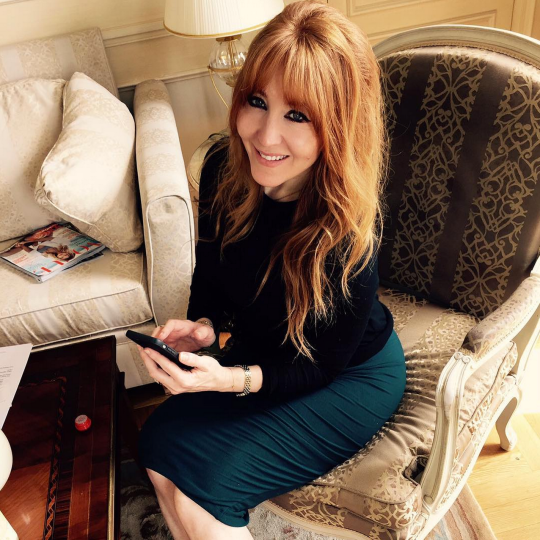 Celebrity and Fashion Makeup Artist Charlotte Tilbury admits she was a spoiled teen when it came to cosmetics. “I played with MAC, with Chanel – anything, everything. I was literally a makeup junkie.” That obsession led Tilbury to pursue a career as a makeup artist. Tilbury worked on fashion shows for Tom Ford and Donna Karan, and her makeup magic appearing on the pages of Vanity Fair and Vogue. Today, her namesake skincare and cosmetics brand is exploding in popularity among consumers. Famous faces love her stuff, too, fans include fashion stylist Rachel Zoe, and actresses Jennifer Aniston and Uma Thurman, and Jennifer Lopez. “Kim Kardashian and the whole Kardashian family – they’re big fans of the brand,” she says.

Among the plethora of stars she’s worked with throughout the years, her favorites are Actress Penelope Cruz and (of course) Model Kate Moss. “They’re fun, they’re sexy, they’re bright, they’re interesting,” says Tilbury. On one occasion, though, Moss did get a bit upset with the redheaded Glauca Rossi School of Makeup alumna. “One time, I couldn’t do Kate Moss’s makeup, [because] I was with a Stella McCartney campaign,” Tilbury reveals. “[Later that day, Stella] walked in and Kate Moss went, ‘I’m furious. You’ve got a Charlotte Tilbury eye on, and I’ve got a BBC eye on!’” It was one of the nicest compliments, Tilbury recalls. But it certainly wasn’t the first, or the last. “All the models would always say to me, ‘We can always tell when it’s your makeup. You always make girls look beautiful. I know it sounds obvious, but you always make us feel beautiful,’” noting it’s the Charlotte-eye (a cat-eye or a hypnotic smoky eye) she’s known for. “Sometimes it’s about looking conceptual and cool, and they’re like, ‘Whatever you do, you always bring out the beauty.’

Tilbury is an energetic and engaging individual, and although she is clearly beautiful on the outside, she refuses to let anyone see her without makeup – even those closest to her. “My husband’s never seen me without makeup – ever. Ever,” she states. Though she also guarantees he will not ever see her with electric blue eyeliner on (a beauty mishap from her youth). “It was very trendy when I was like 13. It was the 80s.”

Currently, Tilbury is collaborating with famed photographer Norman Parkinson for a makeup and accessories collection. His images appear on her makeup bags and compacts (like Filmstar Bronze & Glow – Suntan & Sunlight). “The Norman Parkinson archive is very, very protected. They’re very protective about what they have,” says Tilbury. “There’s a picture of his wife, which has never been printed before. His wife was his muse. I thought it would be brilliant and incredible to have that on one of the compacts.”

The partnership came about in a rather modern fashion. “I was posting pictures on Instagram of Norman Parkinson[‘s work]. Norman Parkinson was one of my icons. Every time I did a mood board – anything – we would always pin Norman Parkinson up,” Tilbury remembers. “When we were working on a photoshoot, we referenced him a lot. His grandson’s a friend of mine. He called me up and went, ‘I see your posting those pictures of my grandfather’s. I’m a huge fan. Do you want to do a collaboration?’ I was like, “Hello?!” Really, I was so taken. I couldn’t believe it.”

The Parkinson collaboration was a dream come true, as is her entire career. “Life throws challenges at us, but you’ve always got to stay positive and basically visualize whatever you want,” Tilbury advises. “Believe that in a negative there’s always a positive. If you believe in that, and you visualize, you can have anything. No one should feel limited. Everyone should think limitless.”

Brad Keselowski stops his lack of victories and takes the first win of 2013, overtaking Kasey Kahne …