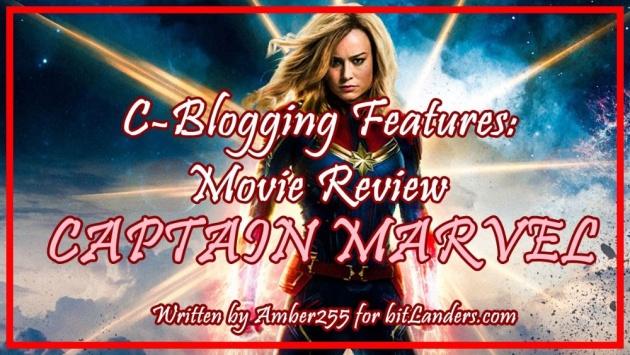 If you read my blogs, you know that I am a fan of writing movies' review. As we have now C-blogging feature, I decided to try writing a review through Querlo Chat. It was actually a great new experience, and I had much fun composting a review of a new film about superheroes CAPTAIN MARVEL from Marvel film studio. So, let's talk a little about this new film, introducing us to a new superhero woman with superpowers.

The new film from the Marvel Comic Universe presents a response to the wave of increased demand for strong independent girls.  At the same time, the film links the events of the last parts of the Avengers, and the new wonder lady is obliged to play one of the key roles.

Despite that we live in the era of comics films, we have not many stories about superheroines. Wonder Woman appeared only in 2017 - and then within the framework of the competition between Marvel and DC, who at least managed to be here first, but did not break the paradigm in which the woman’s purpose and self-expression are somehow connected with love. “Okay!” - Marvel said and signed on their own project with Anna Boden and Ryan Fleck, who came out straight from indie films. And so we got CAPTAIN MARVEL with superheroine Carol Danvers.

Captain Marvel is the twenty-first full-length film in the Marvel Cinematic Universe and the first solo film with the main female character in the Marvel universe.

Everything turned out in the best traditions of Marvel. It looks easy, fun, perky. It's like coming to a familiar cafe with a cozy atmosphere, where you are guaranteed to get what you expect. The film features clashes of alien races, chases on the ground and in the air, the music of the 90s, jokes and Samuel L. Jackson rejuvenated by computer graphics.

The writers throw slogans on the viewer that seem to be necessary for a modern film with the main character a woman, but they do it too straightforwardly. Although, it is still necessary to repeat the common truth that a girl can dream of a career as a fighter pilot or scientist. Yes, it is important to inspire adolescents to think that no matter how many times you fall, the main thing is how many times you go up.

Check this C-Blog about CAPTAIN MARVEL movie and have fun if you decide to watch it:

If you checked my C-blog, you know that a new Marvel movie is about female pilot Carol Danvers that gains supernatural abilities after a collision with an alien warrior. She learns to control her power to protect the Earth from powerful invaders.

Marvel was well aware of all the risks of film production, the name of which already contains one of the shrines - the very word Marvel. And that's why the movie turned out to be memorable, with an interesting mainstream conflict and unusual presentation of the Skrulls.

Watch or not? Marvel movies fans - CAPTAIN MARVEL is for you. It's still an entertaining product that is filled with action, a good soundtrack, and skillful humor. We learn how Fury lost an eye - believe me, this is important.

Querlo, Artificial intelligence with a heart, strives to evolve and develop new initiatives.

Chatbot Assistant, powered by Querlo, is an AI-powered chatbot that engages your audiences like a virtual you! We are continuing to support Querlo and to promotion for our future - Artificial Intelligence - and our blogging initiative. Here we are to announce new Double Bonus Reward topics for both C-blogging and regular blogging. All blogs about the given topic that are submitted for review will receive additional bonus rewards!

Check  these videos to get more info about Chatbox Assistance:

What is a Chatbot Assistant - Video credit: youtube.com

And one more video to help you:

Thanks for reading and participating in my C-blog about CAPTAIN MARVEL.