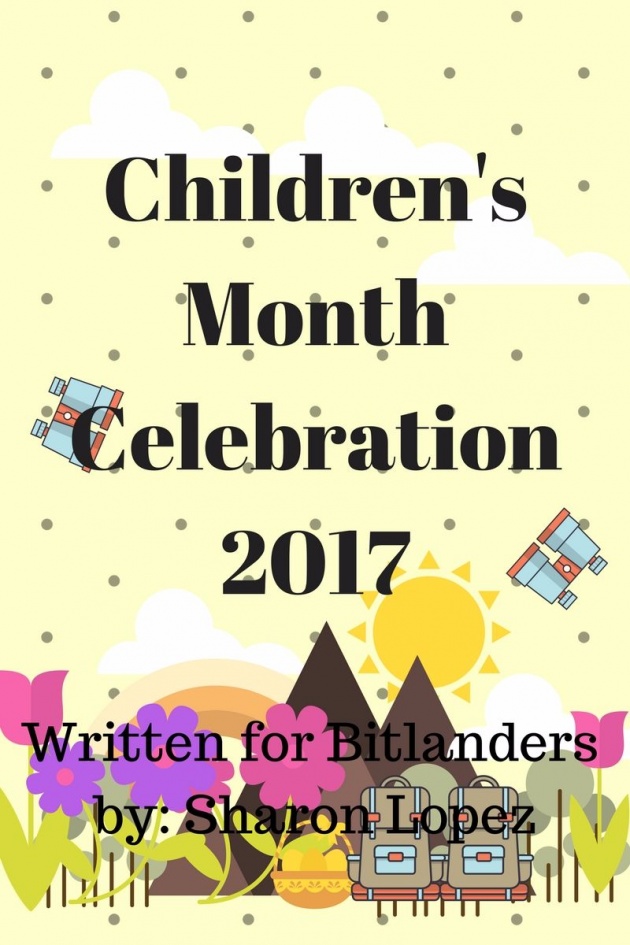 That was what I felt when an invitation came in unexpectedly. November is a month dedicated to children and I have just written a post about children's month celebration and how much I missed the old times when I was still assigned to a municipality of Pilar.  I don't understand how they arrived to a decision but what I know is that I am happy, not only that I can visit the place again but the thought that my efforts and my stay in the place were appreciated.

The Children's Camp Activity was previously set on the 11th of November but because of the weather disturbance which came in last week, the activity was rescheduled on the 18th incorporated on a three-day Children's Camp Activity, November 17, 18 and 19.  Several activities that would enhance the skills and knowledge of the children in terms of leadership, disaster preparedness and resilience, teamwork, communication, trust, innovativeness, and independence were part of the program. The activity also aims to develop camaraderie among the children.

It was supposed to be a joint discussion activity between me and Sir Andy, my former supervisor and former officer of the municipality who was now assigned in the adjacent municipality, the place which is known as the Whale Shark Capital of the Philippines, Donsol, Sorsogon. But Sir Andy was already scheduled to leave for Manila for another training activity. So, I have to handle the group alone.

Nonetheless, I was happy because my friend, Steph, a police officer assigned in the place assisted me and she also discussed some topics that would help the children gain awareness on the child pornography and drug abuse. It was a nice thing meeting her again because since I am already assigned in another place, we seldom see each other.  It was a different thing when we were working in the same place because we can see each other every day.

I found a group smaller than I was expecting. I was informed that I will be handling a group of 98 children with age ranges from 12 to 18 but I have seen only around 60 participants were there. I had known that the whole group was divided into several sub-groups and activities were being conducted simultaneously. 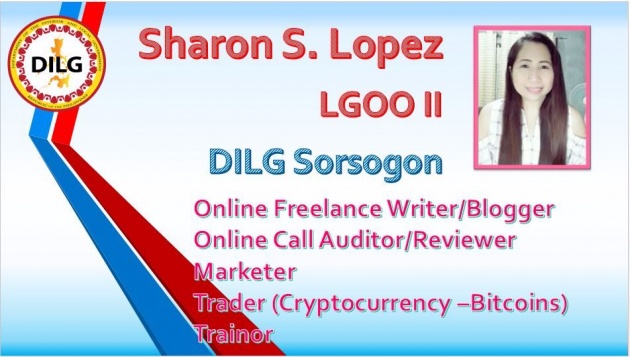 I started my discussion by a brief introduction about myself and the reason why I am there. My discussion was aided by a powerpoint presentation which I had to rush the previous day an until midnight last night. Since I am aware that I will be talking in front of children, I already prepared some chocolates, biscuits, and candies to be given to those who can answer some questions that I already prepared. Having some reward to those who are active is one way of gaining participation from the audience. 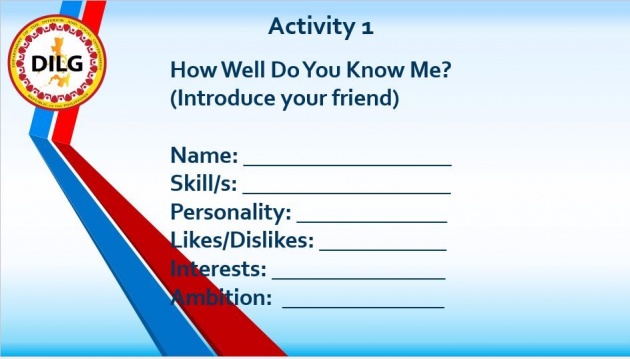 One way of knowing how these children are doing in terms of communication is by giving them a chance to talk. So, I instructed them to find a partner and know that person's interests, talents/skills, hobbies, likes/dislikes, ambition and other things worth sharing about them. Instead of introducing themselves, they will introduce their chosen partner. 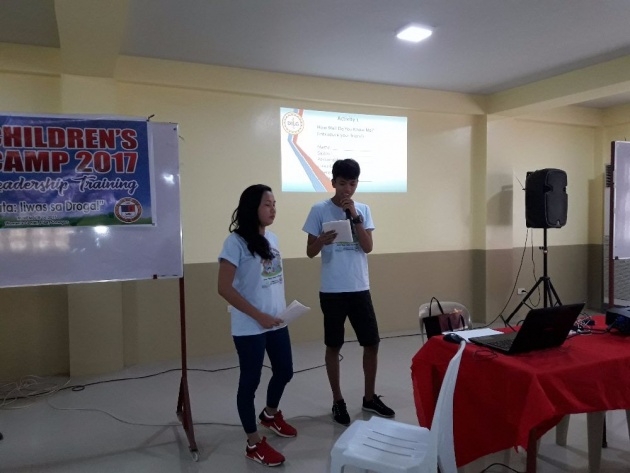 One thing that I noticed is the need to further develop the children's communication skills, especially in the use of the English language.   Poor sentence structure was noticeable, a concern which I supposed must have been addressed during the late elementary level and early high school years. But on the overall, I was amazed by the different skills they have and their ambitions. I can see the leadership ability in most of them.

After everyone was introduced, I asked a few students regarding the way they acquired the information from their partner. Feedbacks were given and I explained the topic further pointing out the way of collecting some information which can be based basically, on observation while some needs to be personally asked the person concerned. 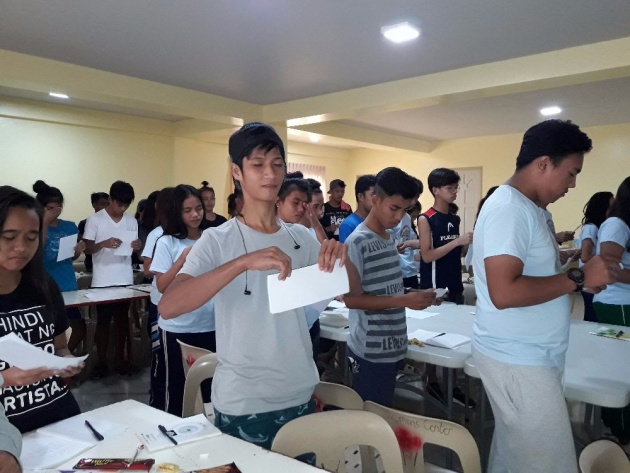 The next activity that we had was the "Paper Tearing Exercise". I requested the staff assisting me to give the participant a piece of blank bond paper. After allowing them to hold their blank paper, I told them that they could no longer ask a question once we started. I told them to close their eyes while following my instructions. After giving them step by step instructions, I allowed them to open their eyes to see what they have done. As expected, they came up with different results. 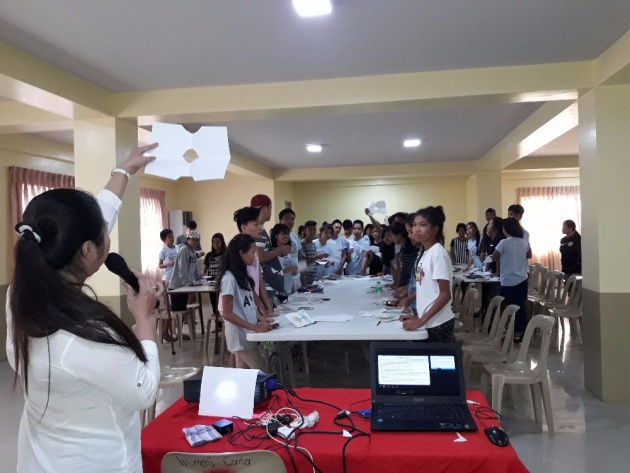 It was fun when children were explaining why they have their result that way. I explained to them that that was the result of their own understanding of the instruction. That we have our own distinct way of interpreting an incoming information. Most often, we came up with similar results to others because of two factors; we can see what others are doing and we can ask a question. These two options were removed during the conduct of the activity.

I distributed the remaining foods that I have while talking about online writing which I can see that is very new to them. A few were interested because of the questions like, how to start and how to receive payment when working online. I gave them some insights and told them that the municipality is currently developing a program in partnership with the Department of Communication and Information Technology (DCIT) that would help them if they are interested in this field of work. 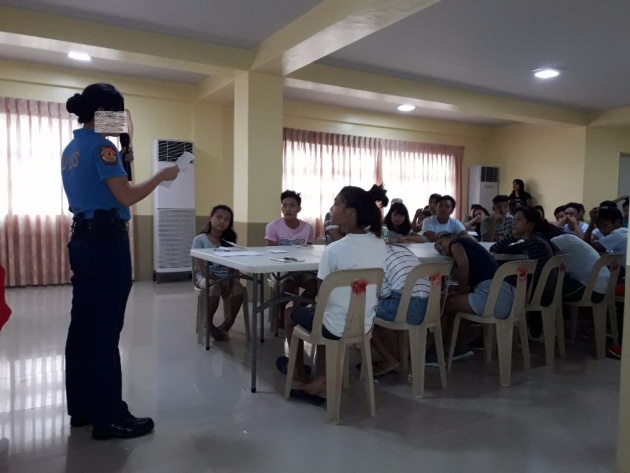 Before the lunch break, my friend, Police Officer, Steph discussed some points regarding prevention from being a victim of child pornography and illegal drugs. Although there were some minor incidence of children being involved in drug-related activities in the place, it is part of our mandate to inform the public so that they may be aware of the negative effects and how to prevent such incidents from happening. Activities like Information and Education Campaigns (IEC) should be conducted freqently as part of the awareness program.

I went back to the main station where the municipal focal person for the Municipal Council for the Protection of Children (MCPC), Sir Arnol was staying together with other Municipal Disaster Risk and Reduction Management (MDRRM)  Staff and some teachers. We had our lunch and prepared for the plenary session.

Around two hundred students were at the hall. Sir Arnol introduced me to the group along with other employees from the Bicol Children Center for Development (BCCD). 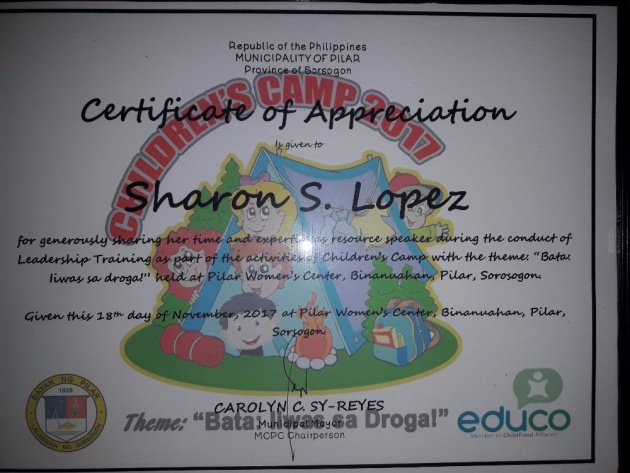 I received the award of appreciation and some token before I leave the place. It was indeed a remarkable experience. 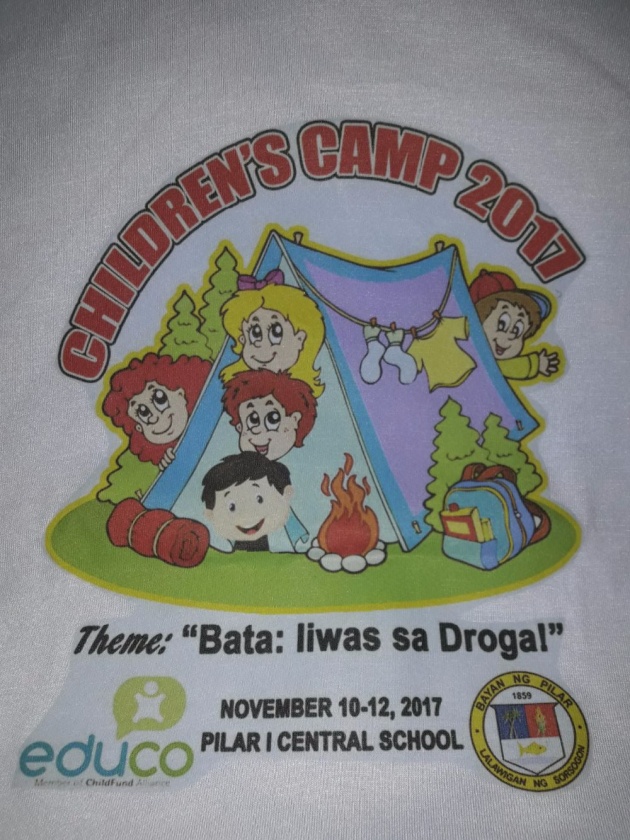 Sir Arnol gave me a new shirt as a souvenir of the activity. Theme translation: "Children, Keep Them Away from Drugs"

I wish that I may be able to return to field assignment where I have direct interaction with the community. But as of now, I am happy to being able to serve them through giving some discussions of the department's programs.

Thank you for reading. Have a great day!

Disclaimer: The views and opinions expressed in this blog post are that of the author and does not in any way represent the agency or department she currently belong