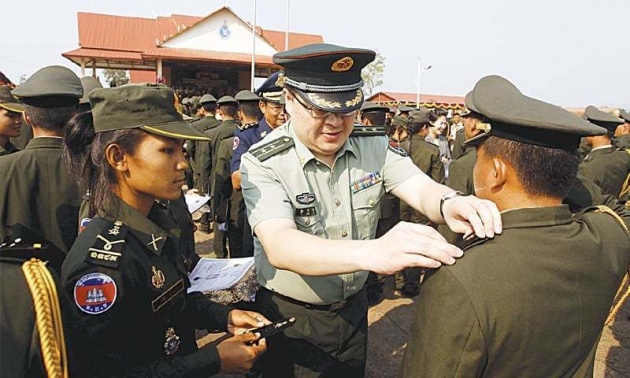 A CHINESE army adviser puts rank insignia on Cambodian army graduates during the graduation ceremony at the Army Institute in Kampong Speu province.—Reuters

THLOK TASEK: When Defence Minister Tea Banh addressed graduates last month at Cambodia’s prestigious Army Institute, he directed his thanks to the guests who made it all possible: a group of crisply dressed officers from China’s People’s Liberation Army (PLA).

The institute, established in 1999 around 80 km (50 miles) from Phnom Penh, is part of China’s rising military aid to Cambodia. Interviews with serving officers and a senior Cambodian government official shed light on how far the school’s influence has grown in recent years.

Military aid, alongside arms sales and billions of dollars of investment, have strengthened China’s ties with Cambodia, and analysts see it as part of a push to extend regional influence, including in the disputed South China Sea.

During his speech at the institute in Kampong Speu province, Tea lavished praise on the “luxurious” facilities — a rarity for Cambodia’s often ramshackle armed forces.

Addressing the Chinese, he added: “We are grateful to them for understanding our difficulties.” Since 2009, roughly 200 cadets have been admitted annually to four-year courses devised by China’s defence ministry and Chinese advisers who oversee a local teaching staff, three officers said.

The 190 students who graduated in March were the third such cohort from the school.

“Graduates have already been put into influential positions, including the head of army brigades,” said the senior government official, who did not want to be named because of the sensitivity of the subject.

“They’re in fighting forces in positions where they can make decisions.” The school also admits about 200 students a year for a shorter six month course.

The official said China paid for the majority of the institute’s construction and covers most of the operating costs.

About half of all Cambodia’s officer trainees now come through the institute, according to an officer with close knowledge of the school, who also declined to be named.

The institute appears to be China’s first attempt to build a large-scale facility of this kind in South-East Asia, said Carl Thayer, a South-East Asia security expert at the Australian Defence Force Academy.

“For China, it’s the beginning of a long-term strategy of winning influence in the Cambodian military by cultivating these people. And China keeps very, very deep intelligence files on everybody,” he said.

“Nowhere in South-EastAsia is the Chinese influence as great as what you’re talking about.” The growth of the school comes amid a significant rise in Chinese arms sales and military aid to Cambodia. China also invests billions into the country’s economy.

In 2013, Cambodia took delivery of 12 Harbin Z-9 helicopters using a $195 million Chinese loan. The next year, it received a donation of 26 Chinese trucks and 30,000 military uniforms.

Chinese-funded construction at the school has proceeded apace. Since an infusion of funds in 2002, more than 70 buildings have been erected on the roughly 148 hectare (366 acre) site, according to an institute document seen by Reuters.

Officials at Cambodia’s defence ministry did not respond to requests from Reuters for comment for this article.

China’s defence ministry said in a statement responding to questions from Reuters that it would “continue to increase its level of support for the institute, to help the Cambodian side raise its teaching abilities and level of personnel training. This aid has no political conditions attached, and will not harm the interests of any third party,” it said.

According to Lao Mong Hay, an analyst and adviser to Cambodia’s opposition, China’s military largesse contributed to Cambodia, as chair of the Association of South-East Asian Nations (Asean) in 2012, playing spoiler in efforts by South-East Asian states to create a maritime “code of conduct” with Beijing.

“The strategic interest of China is also to split Asean, and Cambodia is used for this purpose,” he said.

Vietnam, embroiled in a row with China last year over an oil rig Beijing parked in disputed waters, has long provided training to Cambodian soldiers and police, as well as military equipment. The neighbours’ navies conduct regular joint patrols.

Chinese aid dwarfs that of the United States, which cancelled delivery of 200 surplus military vehicles in 2010 after Cambodia deported a group of Uighur asylum seekers to China in late 2009.

Two days after that deportation, China and Cambodia signed deals worth an estimated $850 million.

In 2013, Cambodia announced the suspension of some military cooperation with the United States after criticism by American lawmakers of Cambodia’s elections.

Washington made available around $1 million for military financing and training in Cambodia in 2014, according to the State Department, and 12 Cambodian military personnel received training in the United States on human rights and
“maritime capacity building”.

Meanwhile, graduates of the Chinese-funded Army Institute are moving up the ranks.

“They want us to see China as a superpower that helps Cambodia in times of crisis,” said an officer graduate, posted on Cambodia’s volatile border with Thailand.—Reuters