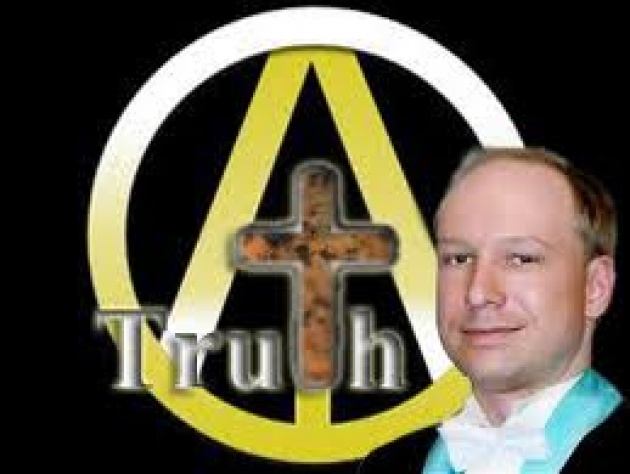 Anders Behring Breivik (Above Photo-Self-Portrait) acted as religiously/ideologically motivated terrorist killing 77 fellow Norwegians. However, some were inclined to promptly label him as insane. His crimes though are no different than those of presumably religious/ideologically motivated terrorists of Muslim background.  Why the distinction between “Islamic radicals/terrorists” and “Christian radicals/terrorists.” Even in the general media when Breivik is identified as a radical, the term “Christian” is rarely used as prefix while the term “Islamic” or “Muslim” is abundantly employed.

There has been theory promoted by even some presenting themselves as tolerant that “ All Muslims are not terrorists, but all terrorists are Muslims.” This ignores history of terrorism and neatly packages responsibility into religious identity. It is a more dangerous form of subtle bigotry, while relieving responsibility of potential crimes/terror committed in the name of any of our world religions or even atheist ideology. Judaism, Hinduism, Buddhism and other of our global faith traditions as well as Christianity and Islam can and have been a motivation for good. They also have been cited by perpetrators as inspiration for abuse of “the other – the non-believer,” for murder, genocide and even rape and infanticide. If we search our holy books, we may even be surprised by references that have been interpreted by some as historical rationalization for the worst crimes against our fellow man/woman.

Organized religion has a responsibility to steer followers away from extremism as well as toward empathy for all human beings and indeed living beings. Media and all of us have responsibility to be objective regarding the perpetrators and their rationalization. The curse of extremism most recently does appear to have been more evident in Islamic majority countries/communities, but it can and has engulfed every faith tradition more recently as well as in historical context. In the United States, terror tactics as murder and burnings/vandalization of mosque, synagogue, temple and church spot our history. We still do not know if bias motivated Sgt. Robert Bales to kill 17 Afghanis (including 9 children), but the genocide against Native Americans was frequently rationalized by Divine right. From slavery, to abuse of Asian-Americans to the “separation of the races” to the KKK and still persistent “white supremacist groups,” manipulated Christian doctrine has been offered as rationale by the perpetrators.

In Europe, we only need to remind of the Holocaust. Jews and others were victims of doctorines embeded with religious references. Calling upon the past of "religious wars/pogroms" Christian Protestants, Catholics and Orthodox perpetrated crimes against each other in the name of God. Most recently, those setting out to commit "ethnic cleansing" including murder against Bosnian Muslims sought the blessing of Christian clerics.

The Islamic world does appear to have a heightened challenge most recently, but none of us can rest on our sense of righteousness or by comparing ourselves to the history of alleged crimes committed in the name of someone else’s religion. It is a human frailty from which neither the Supreme Being nor identity has made any of our major traditions immune. None of us gets a free-pass from responsibility - just see our ancient and most recent history. If you think though that you are immune by religious identity, then you are already a carrier.