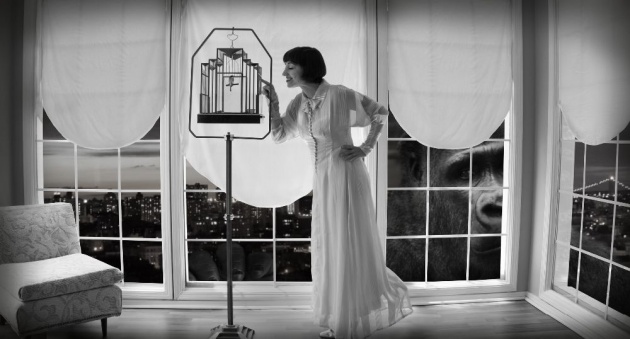 Some people say that my photos are "cinematic".  I guess that doesn't surprise me, since I film my stories more than I photograph them. But I wonder what it is about my photo that makes them think of - film?

The image above is titled "Glass Cages", and is my latest installment in the "On the Edge of the Universe" series I'm creating this summer.  Plainly, it's inspired by "King Kong", one of my all time favorite films (and that's me! for those I haven't met in person yet). On my website blog I've written all about the inspiration behind this photo: http://inbytheeye.wordpress.com/2014/08/04/glass-cages/ - about adventure movies, and the metaphors they bring to one's own life.

But the question I wanted to ask here, of the Film Annex filmmakers, is...does your work in photography vary from your methods in film?  Or is it very much the same?  I hope that when people call my photos "cinematic" it's because they are expecting the image to move at any moment, or because their imagination has been inspired and in their mind they are carrying on the story.

With CALYPSO I'm very much blending the two into one project. And have noticed an influence on one to the other. But I don't know that prior to this, that I ever sat down to think about how I approach film and photography differently.  In one I need to capture the motion all in one frame, in the other, my camera can move with the action.  Though in an upcoming film project, I will have a stationary camera and the entire film will be in one shot.

So, it's an interesting thought, and I'd love to hear what your ideas are on the variations between the two.