Coron Palawan is one of the best islands in the Philippines as much as Tourism is concerned. This is a small town but it is composed of more than 200 islets. Each of which provides picturesque ambiance and instagram - worthy beaches plus shipwrecks and beautiful underwater life. This is also the reason why it has been part of my wish places to visit. This blog covers our first day as in the beautiful island of Coron.

The view of the mountains of Coron Island from the first few steps at Mount Tapyas. Photo is mine.

Before I would show you how our first day in Coron went, let me tell you the story as to how we finally got a chance of visiting the beautiful Coron. Before, I would always think that it is almost impossible to go here because the tickets are very expensive.

So early this year, Philippine Airlines had a seat sale for their anniversary. I was out of idea that this airline which I consider as an expensive one would actually give cheap tickets so when there was a chance, I of course didn't let it pass. However, I didn't learn about it straight from Philippine Airlines. What happened was that there was a post on Facebook giving cheap fare going to Coron plus tour packages in the island too. It was affordable that I got really interested and eventually emailed the agency. They were very responsive and I let them send me the package details including the ticket reservation which needs to be paid within that day. Glad that they sent it to me early that day and I found out the reserved tickets were from Philippine Airlines so I went ahead and checked their website. 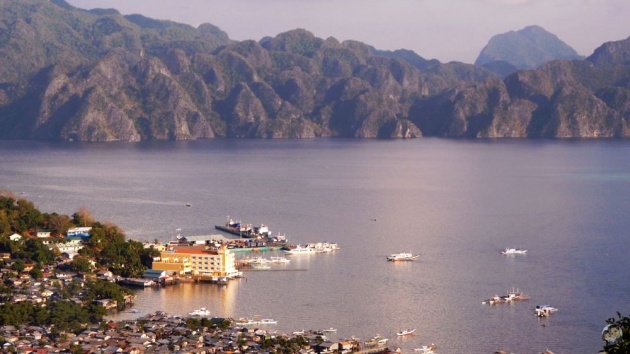 The community of Coron. Photo is mine.

Indeed there was a seat sale, I booked tickets myself tagging along my brother and his wife. I was actually okay with the agency, the only issue was that they need the payment within that day and I hate schemes like that but later on I realized it was because the airline doesn't hold the reservations for 24 hours like what Cebu Pacific does. Anyway, long story short, I ditched the agency and booked the tickets myself online and paid via credit card which will bill us the next month, which is a lot better than paying the air tickets right away on that day.

After few months of preparation for this trip, we finally were heading towards Busuanga. That was my first time to take a Philippine Airlines flight, the plane was small and the flight was okay however there were certain case of fear during landing like it was too close to the mountains but nevertheless, we were all safe and sound upon disembarking the plane.

At the airport, vans for hire all awaits for passengers unloading from the plane. The airport reminds me of that of Tagbilaran City, tiny and quiet. We looked for vans going to Coron and booked one which only had the four of us as passengers. It actually felt like a special trip for the four of us. 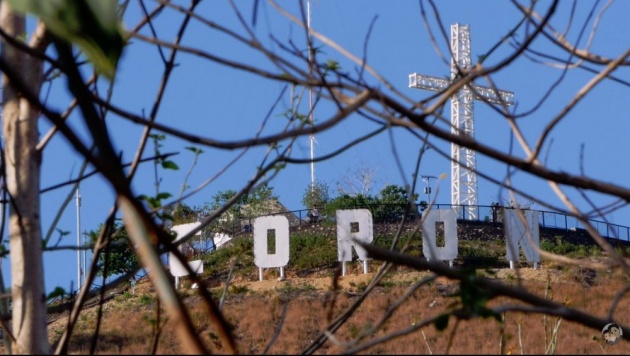 The CORON large imprint at the top of Mount Tapyas. Photo is mine.

Previously on my research, the blogs would say that the travel time from Busuanga to Coron would take around 40 minutes to one hour but we reached Coron in less than 30 minutes! There was no traffic on the way, only picturesque landscapes of green grasses and bald mountains. I was literally having this urge to ask the driver to stop so we can take photos of the landscape but I somehow got a little shy because the driver looked like he was in a hurry.

The rough path started and then eventually we were running on a cemented road. We found less households on the way, however there were wide areas with cows lurking and feeding by the grasses wherever there's shade. Most of them were under the trees, just chilling.

Then we finally passed by resorts along the road signifying that we were almost in Coron. The driver pointed Mount Tapyas which was our first destination of the day. That was around 11 in the morning, we will be climbing that mountain late in the afternoon for the sunset view.

The van driver maneuvered a right turn to a narrow road passing by a school, then a cemetery and eventually found ourselves in a spot where there were houses standing just right next to each other, that somehow reminded me of the area in Cebu with squatters but it doesn't look bad compared to that in Cebu. Anyway, the driver knew where we were staying so he stopped the car and we found ourselves in an empty spot where boats were docked at a distance. 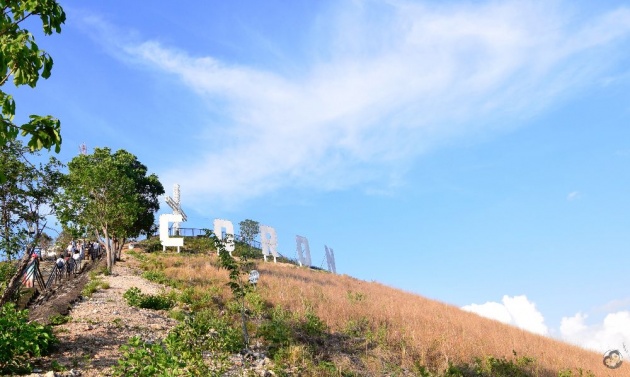 The view from the middle part of the steps to Mount Tapyas. Photo is mine. 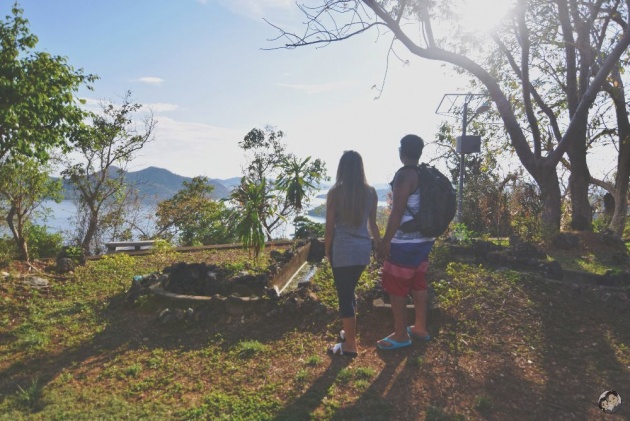 My brother Jonas and his wife watching the view. Photo is mine.

Then we found Patrik and Tezz Guesthouse's entrance door. I will have to create a separate blog for my review about the guesthouse which we stayed in the entire four day vacation in Coron.

In Coron, there are lots of places to stay but they seem to all be expensive. There were a few backpackers place but I got interested with how the Patrik and Tezz Guesthouse's got almost five stars in their review in Tripadvisor so I had selected it. Also, the response I received from my inquiries were really fast and reliable plus there was no deposits asked.

We were welcomed by Ate Raquel when we arrived and she gave us the house rules and briefed us as well with everything about the guest house. We truly appreciate her accommodation and her making us feel like we were home. Plus, they got pets in the house too! There was a cat named Daddy Cat, a dog they call as Muche and another dog which I forgot the name as we didn't see her in the entire stay because she's just staying at the other side of the guesthouse.

Again, I'll be posting a separate blog for the guesthouse review. After having lunch, we stayed in our rooms and just relaxed and prepared for our first destination: Mount Tapyas.

MOUNT TAPYAS AND ITS 721 STEPS

As the clock hit four in the afternoon, we stepped out of our rooms and took a trike towards Mount Tapyas. While my phone shows it is just a few minutes away from where we were located, we still took a trike and later found out that it can indeed be walked. Anyways, we reached the base of the mountain, passing by the road which has eateries and restaurants at its side, they were all busy preparing for dinner I guess. 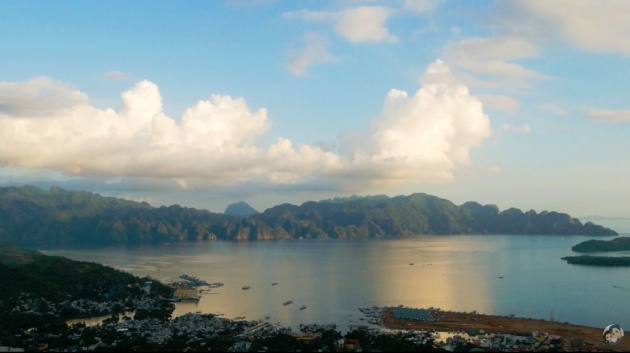 The view of Coron Coastal area. Photo is mine. 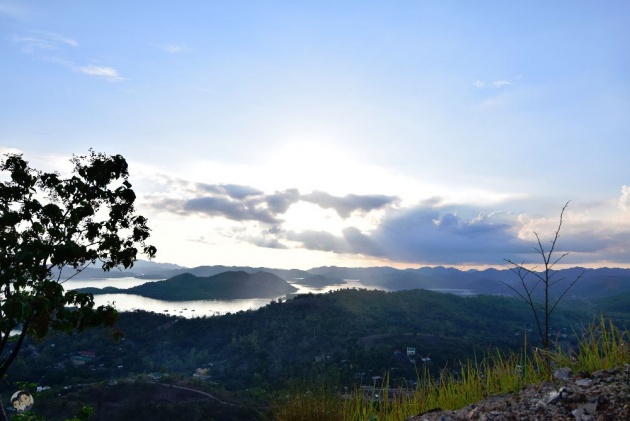 Each time we stop, the view is just amazing, this was at step number 400. Photo is mine.

There's no entrance fee for this and there's a note at the base stating that this is one of the projects made from the taxes of the people of Coron which I found really nice, there was no mentioning of donors or such but the Mayor gave credits to no one but the tax payers.

Now it has been a given fact that the view at the top of Mount Tapyas is very nice given that the weather is also nice. There was no signs of rain the whole day so we were expecting a romantic sunset once we reached the top. But before we get to the top and witness a romantic sunset, we have to overcome its 721 steep steps .

Mind you, the walk was not easy specially for me so we had to stop at certain point so we can rest and breathe. There were also a lot of tourists trekking to the top, there were even ones who were jogging and some bikers too who I believe were going to bike towards the base on the rough road.

We started walking from the base at four but reached the top at almost six because we stopped a lot of times not just to rest but to also take photos at each view that it reveals while on our way to the top. The view actually was nice specially the mountains at the distance.

MOUNT TAPYAS AND ITS ROMANTIC SUNSET

Reaching the top of Mount Tapyas was already an accomplishment. There's a huge cross at the top and an huge imprint that states CORON is displayed at the sides of the mountain. A lot of the tourists were stationed facing where the sun was setting and we have to also find our own spot so we can get a good shot of the sunset.

A wider view of the Coron Islands, this was taken at the top of Mount Tapyas. Photo is mine.

Before the sun set, the sun was hiding from the thick clouds. Photo is mine. 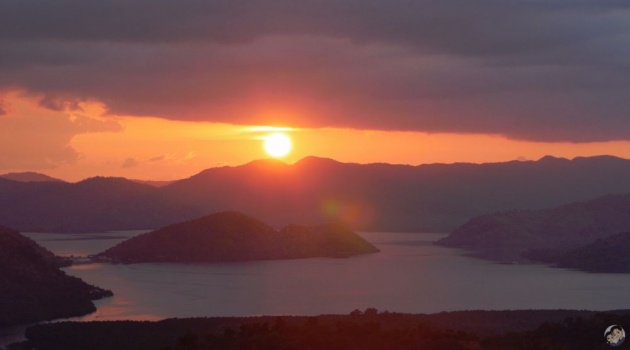 The huge sun setting down, view from the top of Mount Tapyas. Image is mine.

I somehow gets frustrated that I can't truly explain how the view looks like. The photos and the description I post here doesn't really give justice to how it looks so I would really suggest that you guys should visit Coron or even witness a sunset like how it looks like in Coron.

Anyways, I got the GoPro positioned and got it recording on a time lapse mode with the 360 degree stand too so it has a nice rotating view of the sunset. Oh aside from the sunset, the coastal view of Coron was also stunning. With how the mountains' monoliths which were somehow shaded, it added drama to the view of the ocean. The boats in the coastal area which were either docking from their island hopping tours or perhaps were on their way to the ocean for fishing, they definitely look cool making their water trail visible from the time lapse video.

Then the sun started to show up from the clouds, there was a thick black clouds above and the sun just mightily reveal its glory from behind. And then I saw the perfect circle sun in between the thick clouds and the mountains. It was just marvelous that I can't help but rejoice and thank the Mighty One who had created this beauty. Then it made me realize that there are indeed places in the country which offers this view, of a huge sun setting down behind the mountains, this view is better than the sunsets which I had previously witness in our other travels.

That was perhaps the best sunset view I had witness myself and I would like to experience it once again on the next day. Let me end this blog here, I'll be posting more for our Coron Adventure.

Please check out my other contents about Coron:

James standing at the middle of the guest house. Image credit: Jean Beltran-Figues via bitLanders.co…