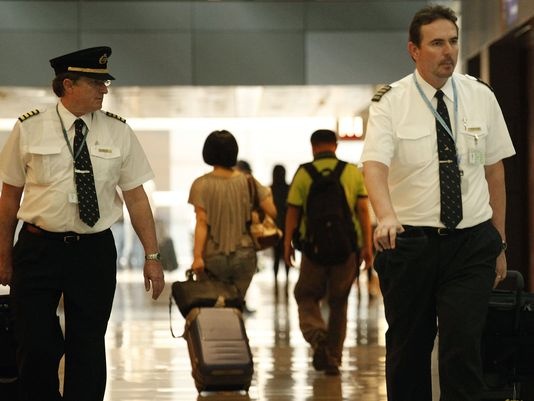 WASHINGTON – As several airlines blamed a pilot shortage for cutting service this month, the Government Accountability Office reported mixed findings Friday about whether there would be enough pilots over the next decade.

The GAO found that pay has fallen during the last decade, suggesting that demand hasn't yet outpaced the supply.

But airlines will need roughly 1,900 to 4,500 pilots per year over the next decade, and the GAO found that airlines could have trouble hiring amid tougher training rules as mandatory retirements at 65 thin the ranks.

Despite this demand, the GAO found that pilots might work abroad, in the military or in another occupation for better wages. GAO said 11 of 12 regional airlines contacted were having trouble filling openings, but that mainline airlines weren't.

"Data indicate that a large pool of qualified pilots exists relative to the projected demand, but whether such pilots are willing or available to work at wages being offered is unknown," the 61-page GAO report said.

Since the start of the month, four airlines blamed service cuts on more federal training for pilots. United Airlines eliminated its Cleveland hub and reduced regional flights there 70% by citing financial losses and federal training rules for pilots.

"This is just the tip of the iceberg," said Dan Akins, an economist with 30 years in the industry who co-founded Flightpath Economics, a group organized to seek remedies for pilot supply.

The group projected that airlines won't be able to fill 4,000 to 10,000 pilot jobs during the next decade because of retirements, federal rest rules created the need for more pilots and federal training rules make it harder to become a pilot.

"There are several hundred airports and communities nationwide that are at risk of losing some or all of their air service," said Matt Barton, another co-founder of Flightpath Economics who has advised airlines on bankruptcy reorganization. "People need to sit up and take notice because finding a solution is going to require the input of many stakeholders."

But the Air Line Pilots Association, a union representing 50,000 pilots, said thousands of pilots are available after being furloughed or laid off by airlines. The average starting salary for a co-pilot at regional airlines is $22,400, however, which the union says makes it hard to justify $150,000 in training to become qualified.

"There is a shortage of pay and benefits for pilots in the regional airline industry, not a shortage of pilots who are capable and certified to fly the airlines' equipment," said Capt. Lee Moak, president of ALPA. "Congress, labor and the industry need to work together to create an airline industry that can offer jobs that are attractive to those who are interested in a career as an airline pilot."

The FAA adopted several rules in recent years that make it tougher to be a pilot, after the Colgan Air flight 3407 crashed in 2009, which killed 50 people. Pilot fatigue and lack of training were among the causes.

In response, the FAA required greater rest between shifts, more training on flight simulators and more experience for co-pilots. Congress required that co-pilots have at least 1,500 hours of flying, to match the minimum for pilots, and the FAA finalized last July exemptions for military pilots and graduates of four-year colleges.

"The thing that we would have focused on and we did focus in the development of all of these rules is how do we maintain the highest levels of safety," FAA Administrator Michael Huerta told a House panel Feb. 5.

Huerta noted several views on the pilot shortage, including training, the share of pilots reaching mandatory retirement at 65 and a union argument that salaries are too low.

The Regional Airline Association, whose members fly half the country's passenger flights, has warned that the costs associated with the 1,500-hour rule would discourage people from becoming pilots.

"it is imperative we continue to encourage the next generation of aviators to support our growing system," RAA President Roger Cohen said. "Congress needs to place immediate attention on the FAA to establish policy that supports this safe air transportation system and reconnects tomorrow's aviators with jobs."

But relatives of the Colgan victims fought hard for the fatigue and training rules and are eager to keep them.

"From day one, our motto has been to 'Put the best pilots in the cockpit and set them up for success,' in how you screen them, schedule them, hire them and even compensate them," said Scott Maurer of Moore, S.C., whose 30-year-old daughter, Lorin, died in the Colgan crash.