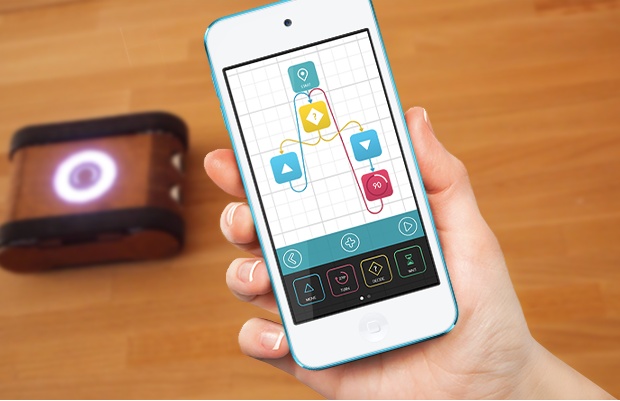 Say hello to yet another cute toy with a mission to lift dollars out of parents’ wallets get kids coding and grasping the basics of logical thinking. Codie is a programmable robot that’s controlled via an app, using a visual programming language simplified into draggable blocks to make it easy for kids to play with. Its target age group is 8- to 12-year-olds

The $150+ Codie bot takes the form of a wheeled vehicle that can perform a variety of actions and reactions, thanks to seven on-board sensors — including a temperature sensor, ultrasound distance sensor, light sensors, and a line tracking sensor — plus a buzzer, microphone and LED lights. The bot’s functions are designed to be configured via the companion iOS and Android apps, using a Bluetooth link between bot and app, so kids can make Codie move and respond to its environment.

The Hungarian team behind Codie, which is raising crowdfunds on Indiegogo to get their gizmo to market, is following in the connected footsteps of the likes of Robotiky,Primo, Play-i and Dynepod to name a few learn-to-code toys of recent years. There’s also the Kano DIY computer kit that lets kids put together their own computer and then use it to play games and learn how to tweak the code to get a sense for programming. (As a sign of the kind of critical mass this category is seeing, Amazon just launched a dedicated shop for STEM related toys.)

Codie’s makers reckon they can still stand out thanks to the effort they’re putting into their proprietary visual programing language, which does not require any compiling time so allows kids to play around with coding and see actions in real-time. The touchscreen software also has a focus on gestures to help kids feel engaged with the visual coding process.

“We designed it from the ground up with a few clear principles in our head,” the startup tells TechCrunch. “It should be intuitive, it should get the most out of the touchscreen and it should follow kids thinking and imagination. This is the first language developed with these goals in mind. We created several custom controls (eg. when setting the color on the top LED ring, kids don’t have to define it with RGB codes, but they just simply set the color with a visual color ring in the app), and users can create programs without even opening the keyboard.

“We’re integrating a number of coding elements into the Codie application. Conditionals, like if-else structures and programming loops are already present. For example, using these two structures, you can create a program which we like to call the ‘Roomba’. Codie gets info from the ultrasonic distance sensor and makes a decision, if there’s nothing in front of it, then Codie continues along the path, if there’s something, then it makes a turn to avoid collision. If you loop this decide process, then Codie will constantly avoid bumping into other objects.”

The team is also intending to create a cloud community where Codie users can share their programs with other kids to expand the learning environment.

To help kids develop beyond graphical programming they are also planning to offer a feature where kids can convert their Codie programs into JavaScript.

“After editing the JS code, they can convert it back to the Codie interface they are already familiar with, and they can examine the changes they made in the JS code. From that point, if someone wants to be a programmer, they can learn specific programming knowledge, but they don’t have to learn the programming patterns, only the specific syntax of the programming language of choice,” it adds.

At the time of writing, Codie still has to hit its $70,000 crowdfunding goal to fund manufacturing and software dev costs. If it does, it’s aiming to ship bots to backers by November. However the startup has already taken in a chunk of financing, with a $125,000 investment from Hungarian investor iCatapult, back in February 2014, and a further $10,000 from an angel investor. Codie was founded in February 2013 but it was a year before the team went full time on the project, following their first funding raise.