a computer is a machine that can be programmed to accept data process data into useful information and store it for later use. a computer consists of hardware and software. the machine is know as hardware. the programs are called software. the processing of input to output is directed by the software but performed by the hardware.

A computer system requires different components to perform the function of Input processing, output and storage. these components are as follows:

main memory is used to store the input data before processing. it also stores processed data after processing until the data is sent to the output device. the main memory is closely connected to CPU but it is separate from it 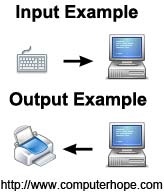 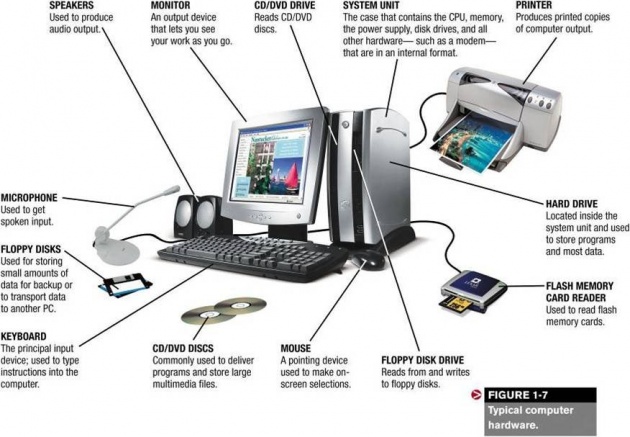 Keyboard is the most commonly used input device data is mostly entered using a keyboard the buttons on the keyboard are called keys. A standard keyboard contains over 100 keys. A keyboard contains numeric keys alphabetic keys function keys and special-purpose keys.

a standard keyboard is normally called QWERTY keyboard. this is because the first six keys on the top row of letters on these keyboards are Q,W,E,R,T,Y.

The keyboard in most personal computers have the following main parts:

function keys from f1 to f12 are used to perform special functions. Their function depend on the software being used in the computer.

the main keyboard includes the keys found on a type writer keypad. it also contains some special keys the special keys have different uses and effects that depend on the software being used.

101- key enhanced keyboard has some additional keys between the main keypad and the numeric keys. it also contains status lights in upper-right corner.

Escape key is used to terminate a command or current task.

tab key is used to move the cursor to next tab stop.

shift key is pressed in combination with other keys to produce upper case letters and the upper symbols shown on certain keys.

control key is pressed in combination with other keys to execute commands. for example, Ctrl O is used to open a new file.

ALT key is also used in combination with other keys to execute commands.

Backspace key is used to delete single character on the left of the cursor.

enter key is used to move the cursor to the bigning of the next line. it is normally used at the end of a paragraph.

Home         it is normally used in word processing or text editors to move the cursor to the top of the screen.

Some additional keys on extended keyboard are as follows:

1. Arrow keys: the arrow keys are used to move the cursor position.

2. Insert, Delete, Home, End, Page up and Page Down keys: These keys are above the arrows key. the functions of these keys are same as numeric keys 0, decimal point (Del), 7,1,9 and 3.

3. print screen: it is used to take a snap of the computers screen.

4. scroll Lock: it locks and unlocks the cursor on screen in some programs. the cursor moves normally when it is turned off. it does not work in all programs .

5.   pause or Break key: it is used to pause screen when information is too fast to read.