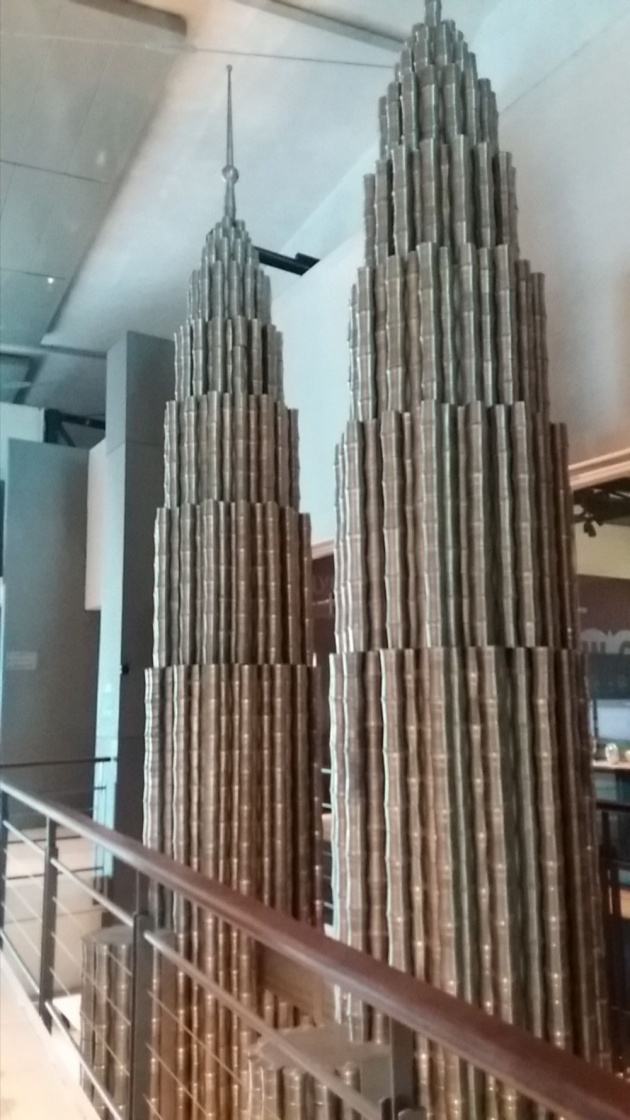 Last year we've used Klook to purchase tour packages in Hong Kong because it was a breeze purchasing tickets, it offered reasonable discounts and promos, and the package inclusions were worth the money. Visiting Kuala Lumpur was no different. I kind of regretted not buying as soon as we secured our plane tickets though, because I missed a big discount from Klook.

This Malaysia Country Tour Package had hotel pick up and drop off inclusions, but because of our slight misfortune regarding our hotel accommodation, we needed to get to Mercu Summer Suites as it was our chosen pick up/drop off location when we bought the tickets.

I was a little anxious because the call time was before 9:00 am, and we came in pass nine. Fortunately, my sister contacted Klook and assured us that there'll be a representative to fetch us so we can join in the fun, even though we were late (thanks Klook!).

The journey started around 9:30 am and as we travel, the tour guide, equipped with a microphone, entertained us so the semi-long ride won't be as boring as it sounds. His ethnicity is Taiwanese, but he's now residing in Malaysia to guide enthusiastic tourists about the rich history of Kuala Lumpur.

I really find the guy with a good sense of humor, because he slips in funny, harmless jokes every now and then. He was patient too and assured every passenger on his bus that there won't be any left behind at every stop. The tour was near perfect, if not for accent difference that is not easy to understand but still comprehensible if you really pay attention.

What I've Learned About Kuala Lumpur

Believe it or not, Kuala Lumpur literally means muddy expanse. What is great about the story is that the settlers then thought of a way to industrialize and commercialize that muddy expanse. It was even chosen as the capital of the country, which it still is today (and forevermore?).

Kuala Lumpur became rich thanks to its trees, namely: palm and rubber. They were the major exports of the land when it was taking root and gaining ground. We can say that Kuala Lumpur's development was capitalized by originally exporting palm oil and rubber. Nowadays, the nation is financially propelled by mineral fuels (hello, Petronas).

I find it hard to recall what has been said about the suburbs of Kuala Lumpur, aside from the fact that they develop very affordable housing programs for their citizens. From time to time, we pass by these buildings somewhat reminiscent of the late Marcos' Bliss Housing Project here in Manila.

Malaysia's roads and buildings were like Manila's, only a little neater because of its (probably) good waste management and almost zero street beggars and informal settlers. Traffic jam is evident but not as stressful as in my country.

Another thing that I have noticed is Malaysia's love for cars. I found a whole street just full of automotive repair stores. I also like to mention that they have homegrown car brands that are very foreign to my ears. 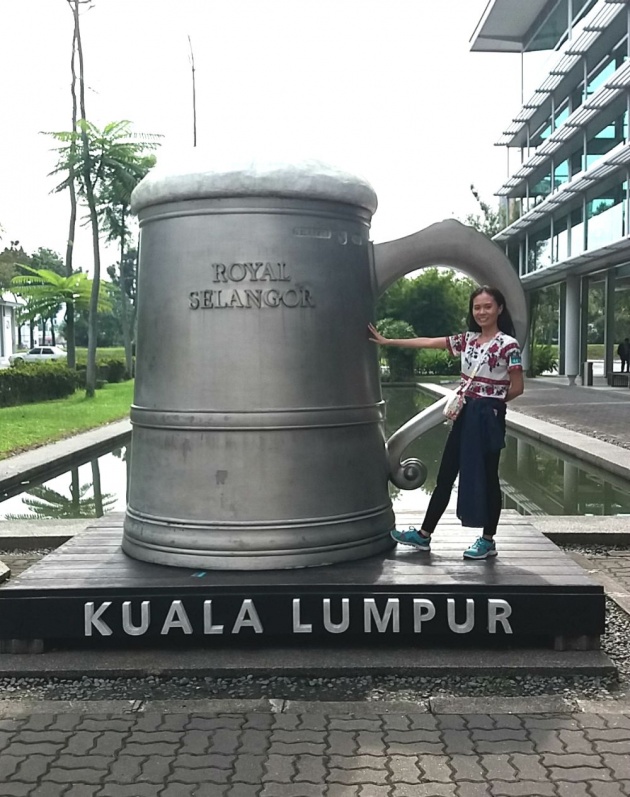 The largest pewter tankard in the world. Photo credit: lapiz-lazuli

This first stop was officially the first walk-in tour we encountered in the tour package, as other tidbits I've mentioned above were done in the bus. We were given a sticker pass and were provided a new tour guide from Royal Selangor.

What is Pewter, by the way?

Pewter is an alloy of tin, antimony and copper, though it has impurities like lead. Pewter nowadays are food-safe and can be used in kitchenware and dinnerware. It has a grayish color but can change its hue over time from oxidizing.

After it's been molded, pewter undergoes three more steps: polishing, finishing, and hammering, before it is ready to use. Polishing is done to soften its luster and remove unwanted file dusts. In finishing, the pewter ware is gilded and finer details are added. Lastly, hammering the pewter article is necessary to strengthen and shape it. 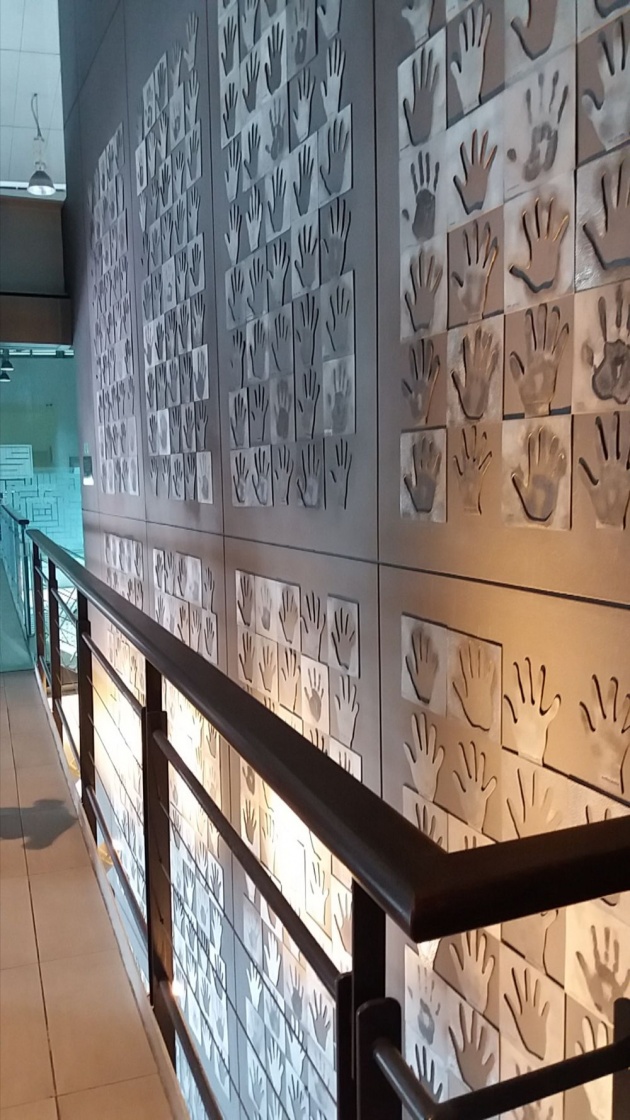 Royal Selangor was really presentable, especially for tourists. First, we headed to a small museum where they showcase their best works of art. The art pieces at this were pretty impressive! You will really feel the effort they give to their craft and masterpieces.

They also value their workers as seen in the wall of hands—they imprint their workers' hand and post it in their museum. They also tell a little something about their company's founder, Yong Koon, and how Malaysia had the largest pewter factory in the world.

Next, Royal Selangor's guide took us to their factory where we sipped a drink (to hydrate us because it was hot in there) using a pewter cup. Here, they showed us how pewter is made from casting to hammering. 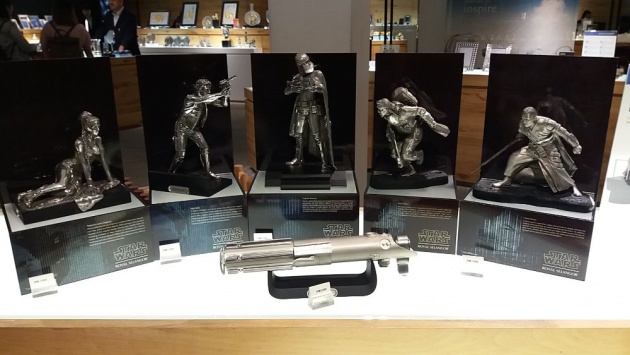 After that, we were led to an extravagant shop where we saw how precious pewter is as it takes on different shapes, from a light saber to jewelry to airtight tea canisters. They were tad expensive though; most articles are more than the price of our Kuala Lumpur accommodation! 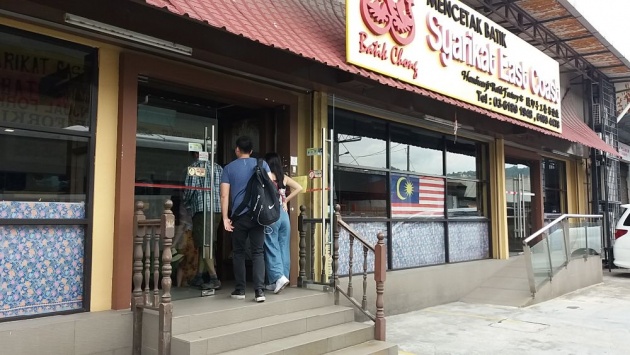 Next, we went to a batik factory named Batik Chong: Syarikat East Coast.

For starters, batik is a cloth that is either designed by hand or the imprint is computer generated. When manually done, no pattern is duplicated and every piece of fabric is a unique piece. Each design is drawn out from the imagination and creativity of the maker.

They use a special type of wax to outline the edges of a pattern, then they color it with different hues harmoniously blended to make it more lively and appealing. They may repeat the process for an even more colorful batik art piece. 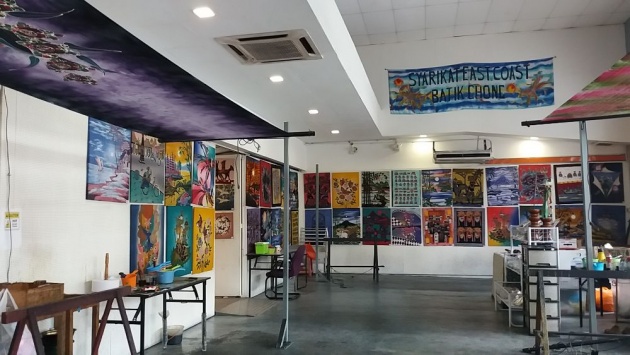 Visiting Batik Chong is quite nice experience. I was really in awe of the little place where their little hands do its work. Observing how they stroke the brush on the cloth had a calming and inspiring effect on me. 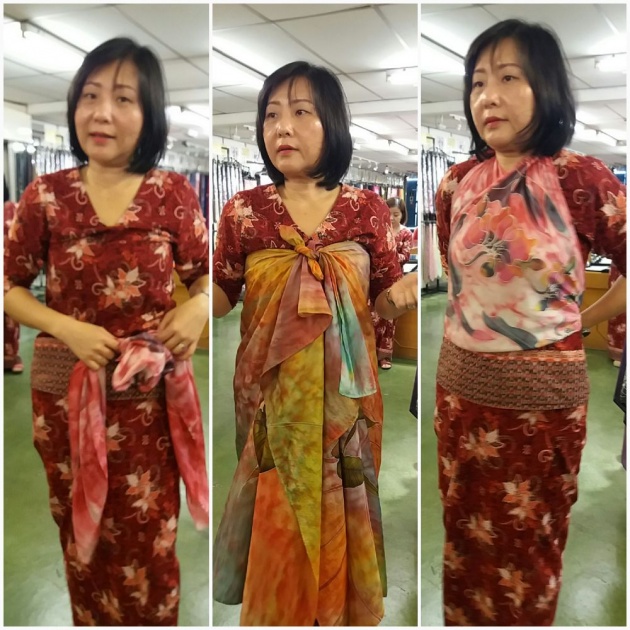 The female tour guide at Batik Chong even amazed us as she folds and overlaps a batik cloth to turn it into various cloth articles, such as a rose belt, a sarong cover up and a sleeveless top. Sadly, to keep their designs confidential, no pictures nor videos were allowed in their store.

Our last stop was in Batu Caves, but I think this is the cream of the crop as this was the highly anticipated tour on our package. We were on our own here, as the tour guide freely gave us the time and leisure to wander around on our own. 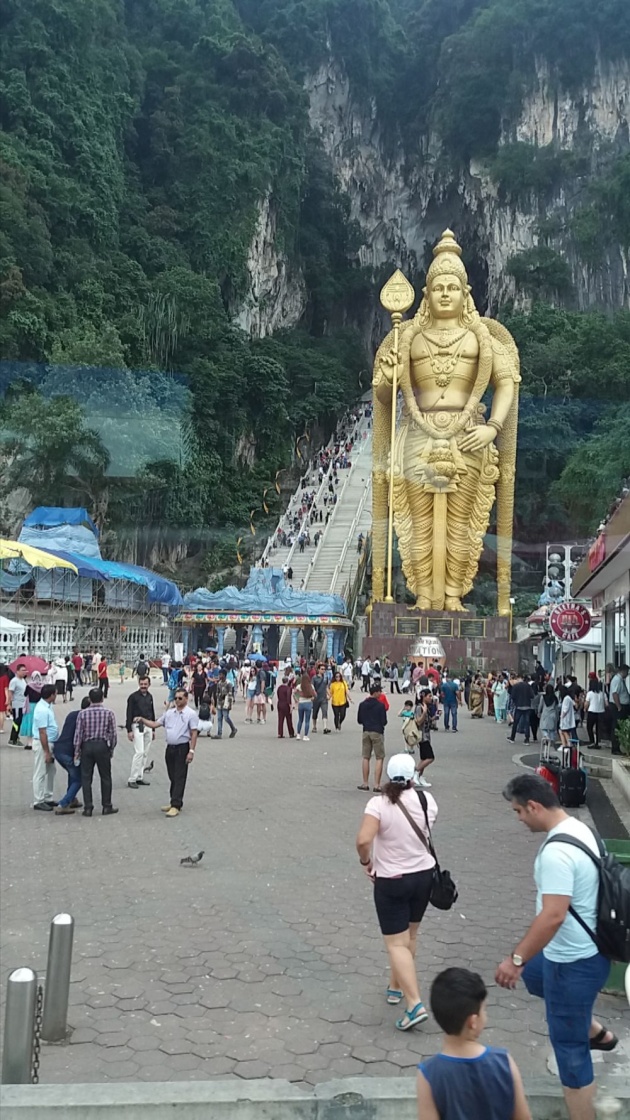 Batu Caves is a large tourist spot, laced with many mini Hindu temples and other mini attractions like the cave, but the big chunk of attention really goes to its staircase entrance up ahead. With its 272+ steps, it was really a challenge and adventure on its own as you need elude the importunate monkeys scattered on the stairs, waiting for their next snack, and also the people going up and coming down.

Peeking at the Peak

I really thought I wouldn't make it, sedentary as I am with null cardio training, but me and my sister managed to reach the top (but not the real peak though). The trick was really on the breathing pattern and quick stopovers, evident in the design of the stairs. When you step on a landing, it's time to catch your breath for a few minutes. Then onward you go with your journey. 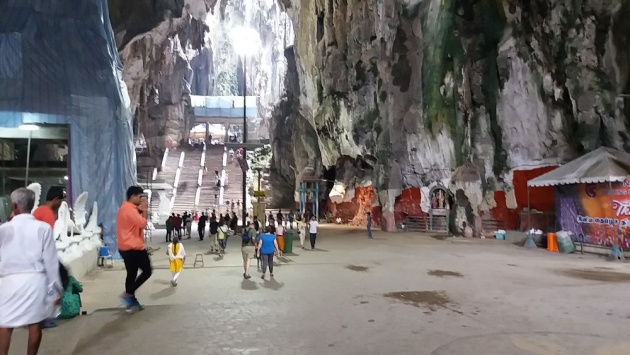 At the top. Photo credit: lapiz-lazuli

Nothing much is at the top, aside from pilgrims at the left, stores at the right and another set of stairs to reach the true top. But it feels quite fulfilling when you overcome those 272 steps, and it is rewarding to feel the cool air at the peak after all that workout and sweating. 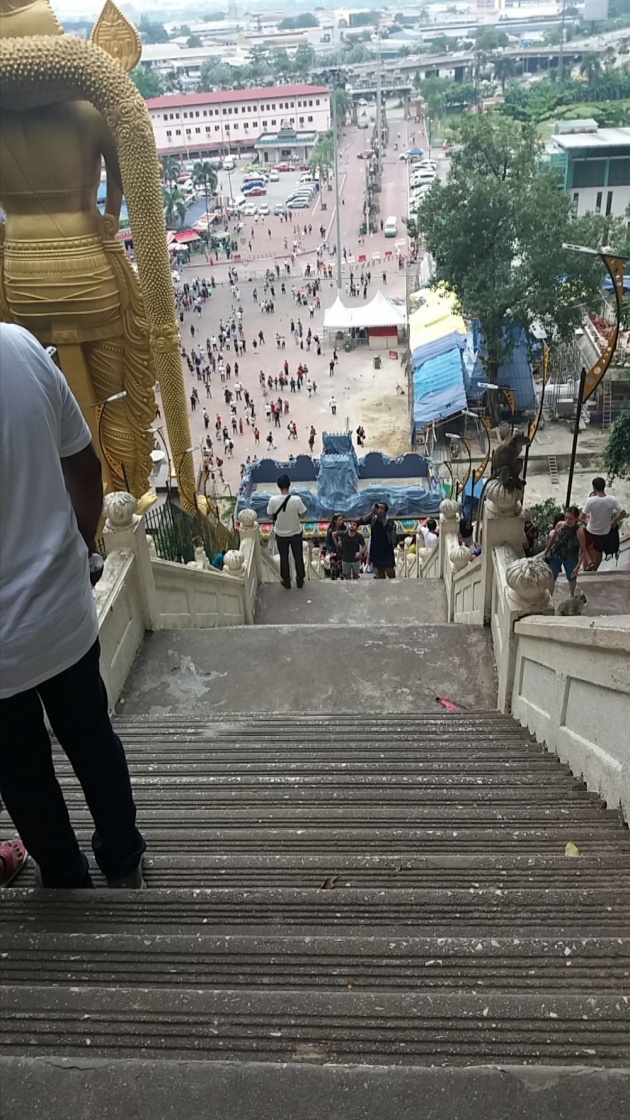 A trivia before I end this post: the big statue at Batu Caves is a Hindu deity named Murugan, it's not Buddha.