Craig Zadan and Neil Meron to Return as Producers for 2015 Oscars! 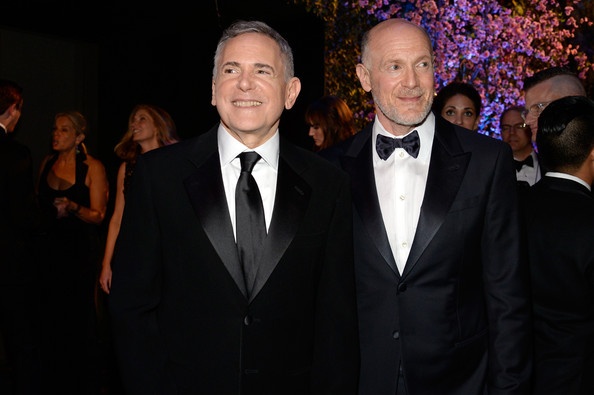 The Academy of Motion Pictures Arts and Sciences has announced that producing team, Craig Zadan and Neil Meron, will return for a third consecutive year to produce the Oscars!

“We couldn’t be more thrilled to have Craig and Neil back to produce the Oscars again in 2015,” Cheryl Boone Isaacs, Academy President, says.   “Their showmanship has elevated the show to new heights and we are excited to keep the momentum going with this creative partnership.”

I do agree!  Zadan and Meron have added magic to the Oscars.  By the way, the Academy Awards next year will be televised on February 22.  They moved the Oscars this year because of the Winter Olympic Games on NBC.

“This year’s show reached viewers of all ages and set social media records, proving that Craig and Neil are masters at tapping into the zeitgeist and capturing the hearts of movie fans around the world,” said Academy CEO Dawn Hudson.

“We are delighted to work with Cheryl, Dawn and the Academy to produce the Oscars for a third time,” said Zadan and Meron. “We’re proud of the show’s success over the last two years and are eager to embark on another entertaining show to honor this year’s motion pictures.”

The 86th Oscars on March 2, marked the return of host Ellen DeGeneres, and featured memorable musical performances by artists including Pharrell Williams and U2, a tribute to “The Wizard of Oz” by Pink, and a star-studded, record-breaking selfie seen around the world.

The show drew an average audience of 45.4 million total viewers, delivering a 13.7 rating among adults 18–49 (Live+7), and reached 74.6 million viewers watching 6+ minutes, the best since 2004. The Oscars were TV’s most-watched entertainment telecast in 10 years and attracted the biggest viewership in 14 years. The show helped drive increases for the second consecutive year, marking a seven-year high for adults 18–34 (+3%); a nine-year high for teens 12–17 (+13%); and an eight-year high for kids 2–11 (+13%). Social media activity was particularly robust with more than one billion impressions generated on Twitter and 25 million interactions happening on Facebook on Oscar® Sunday. Additionally, DeGeneres’s selfie became the most retweeted photo of all time with 32.8 million views.

Zadan and Meron’s feature film, television and theater productions have earned a total of six Oscars, 11 Emmy® Awards, two Tony® Awards, a Grammy® Award, five Golden Globes®, two Peabody Awards, five GLAAD Awards and two NAACP Image Awards. For film, they executive produced the 2002 Best Picture winner “Chicago,” which won Oscars in six of the 13 categories in which it was nominated. Their credits also include the feature films “Footloose” (2011), “Hairspray” (2007) and “The Bucket List” (2007). Zadan also produced the original “Footloose” (1984).

For television, Zadan and Meron executive produced last year’s groundbreaking “The Sound of Music Live!” which drew a record-breaking 21.3 million viewers. Their other critically acclaimed credits include last year’s miniseries “Bonnie and Clyde,” the TV series “Smash” and “Drop Dead Diva.” The duo has also produced such Emmy-nominated television movies as “Steel Magnolias,” “A Raisin in the Sun,” as well as “Annie,” “Serving in Silence,” “Rodgers & Hammerstein’s Cinderella” and “Gypsy.”

On Broadway, they recently produced the revivals of the Tony-winning “How to Succeed in Business without Really Trying” starring Daniel Radcliffe and John Larroquette, and the Tony-winning “Promises, Promises” starring Sean Hayes and Kristin Chenoweth.

Zadan and Meron’s upcoming projects include executive producing the television musical “Peter Pan Live!” Their new MTV comedy series, “Happyland,” premieres this summer. For the big screen, Zadan and Meron are producing “Pippin” for the Weinstein Company, a musical based on the extensive Beach Boys song catalog for Fox 2000 Pictures, and “Monster High” based on the Mattel franchise for Universal Pictures.

Hi guys today, i'm writing a blog on the top tenNuclear Power in the world. These are the countries …