I originally was on Amy’s shoot as a runner/driver, but when the day got underway and all the equipment, cast and crew had been transported to the location i became part of the lighting team with Elliot Johns to set u for all the morning shots. The set she had built was only out of cardboard and sheets etc. so it was very flimsy and proved difficult to set up lights around such weak set, it looked fantastic and was very well put together but as for lights being placed it was a bit dangerous. Me and Elliot figured out the best positions to get the lights for shadows and where we weren't near any of the fake walls and it was all set up for half the days shooting.

After i had changed role from driver/runner to Lighting, i then half way through the day changed roles again to Boom op as their stand in boom op was not good enough, sound isn’t something that i enjoy massively but i know what im doing and it was good to jump into all the different departments throughout the shoot.

Later on in the day a problem we had with the lighting again was the shop windows, there was sun coming in through the windows and it was hard to find a way to black them out, as not enough window blocker was bought for all the windows and if we were to put card up to cover it it would look unnatural. Because of this we had to end up changing the camera angles slightly of that scene to make the window that was bringing the light in not visible, we could then black out the windows that were causing the problems and make it look like the other shots with our lighting, this was the only real problem we came across throughout the shoot, but once that was figured out the day ran smoothly and on schedule.

We finished the shoot on time and because i was not on the shoot the next day because i was on a different level 6’s shoot that was me done for Amy’s shoot days, it was a good experience to move into all the different departments and a learnt a lot about being moved around unexpectedly on a shoot. 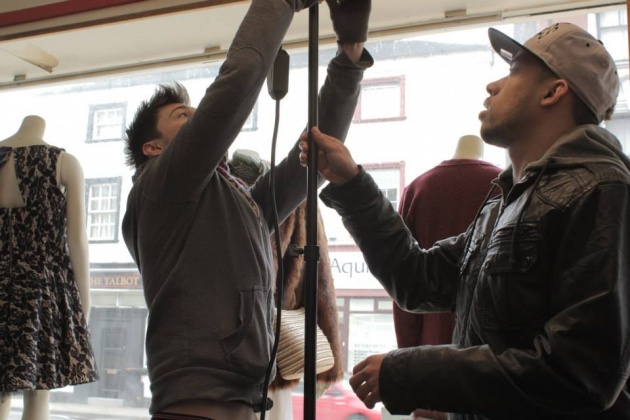