For the past few weeks I've been raising money to film one scene from my feature film, TITANIA.  The scene will be used to help illustrate what the film will look like, involve, and accomplish to major investors for principle photography.

After three successful crowdfunding campaigns, we decided to go the route of wooing individual investors this time.  Besides the fact that all of my friends and family are "crowdfunded out" - we didn't want the hassle of it, to be frank. Several filmmakers recently, have expressed dismay at launching crowdfunding campaigns, mainly because they take up too much time and money.  You have to spend money on rewards, you have to spend time on rewards, and you have to answer to all the people who have funded you.  I support many crowdfunding campaigns, but once I've donated, I let it go - and am happy to see the finished film. Yesterday, on Twitter I saw one such indie filmmaker answer half a dozen tweets to backers about when her film would be released.  It takes time, and often schedules get stretched.  I felt for her, answering to so many complaining voices (and it hasn't been two months since she got funded!) - spending time doing that when she could have been working on the film, instead they added pressure to her already stressed mind. I've been there myself. Constant emails from people who didn't get their reward, or didn't see your updates, or want to hurry you up with production. Don't get me wrong, I'm extremely appreciative of their support, but this time out, we knew 1. we didn't have time, and 2. we needed to move into bigger waters.

It's hard to convince a few people to give you a lot of money. But if you believe in your project, then you're well on your way.  This is a very new process for me, and since the TITANIA production video diaries will be posted here, thought I'd blog about all our steps, in case it's helpful to others.  :)

We made a small investor packet because it's one scene, but still included all the important points. We need $15K for this first shoot.  (You can see the first page of the packet below) We consulted with a business man who has invested before, and a former in-house Disney producer on what we should include.

We've also brought someone on board to help us get sponsorships: A local restaurant to donate food in exchange for credit, a jewelry company may want to donate accessories for my fairy queen and use photos in their advertising from the film.  All those things cut down your budget.

I also recommend joining IFP. The Independent Feature Project is a fantastic resource for learning, connecting, and getting discounts.

Lastly, this article on what investors really want to hear, is extremely helpful! http://www.chrisjonesblog.com/2013/05/the-film-investors-check-list-%E2%80%93-answers-to-tough-questions-your-investors-will-ask.html

So, all of our ducks are in a row, our fingers are crossed and we're off! Our permit was approved to film on our location on April 28th - so we've got a goal date in front of us.

I'd love to hear what else you do to attract individual investors, and how you've gained success in film financing. 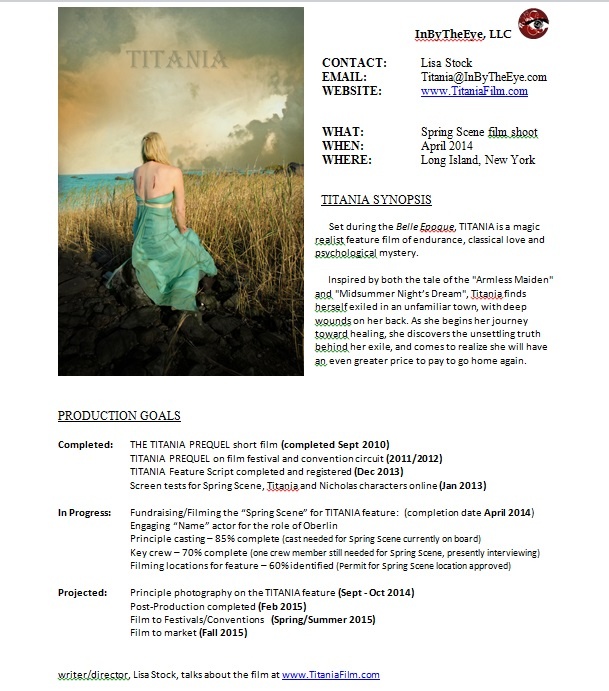 You can watch my TITANIA director's reel below or where linked to TITANIA above: