Cyberbullying: Are you a bully?

Cyberbullying: Are you a bully? 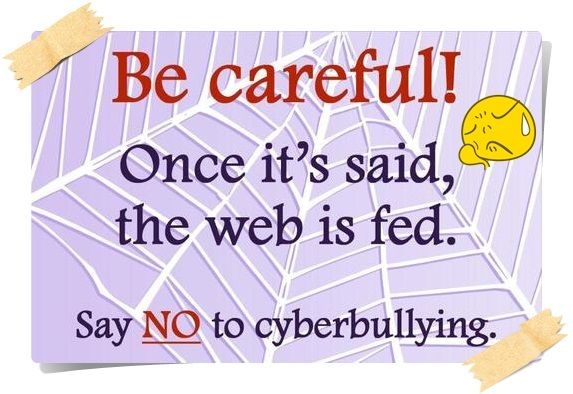 Warning : this blog does not necessarily discuss all the heinous cyber crimes that's happening nowadays for it would certainly become a series of pages on Google. This blog is just merely focusing about the cyber bullying, its impact and some samples of it. -> #Shaiera

It's a cold evening when I decided to take a cup of coffee and sat in front of the television and started to watch. I am not really a type of person who love watching, but the title of the featured topic in magpakailanman caught my attention for a while and somehow got me curious so I decided to watch the whole episode. 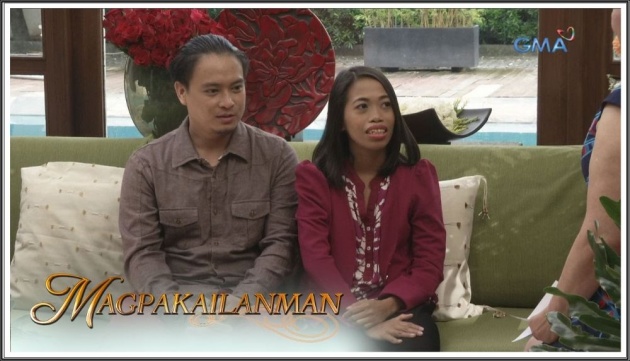 Magpakailanman is an anthology television show here in the Philippines aired every Saturday night at 8: 00 PM in GMA 7, kapuso network. It is a show focusing to the different situations that are happening to a certain person and this time, there topic is about cyber bullying -- a featured topic that unveils a true-to-life impact of cyber bullying and that triggered me to write this up.

Ms. Mel Tiangco , news anchor in 24 oras, is the host of this Saturday evening program in one of the local networks in the Philippines which is GMA7 also known as the KAPUSO CHANNEL . The magpakailanman show features the life experiences of famous personalities and ordinary people where she is interviewing a certain person that is sharing about her story.

Here is the video of the episode from magpakailanman aired last October 23, 2016. Magpakailanman featured a topic about cyber bullying entitled as TRENDING: Ang babae sa bus ( The girl on the bus), the story of France. Just watch the video below.

Since you have enough idea about the show and the featured topic for that day, let's move forward to my main topic which is Bullying.

Bullying is when someone is being hurt either by words or actions on purpose, usually more than once, feels bad because of it, and has a hard time stopping what is happening to them.

Bullying is normally happening in our a community and sad but even in school. Bullying has several types such as in physical, emotional, verbal and the most common type that is really upsetting which is the cyber bullying.

Bullying can be in physical in the act of hitting, taking or breaking another person’s things, fighting, tripping (commonly happening to some schools), yelling at someone even in front of the other people or not, making rude gestures, pushing and shoving, and other kinds of forces and harassment. 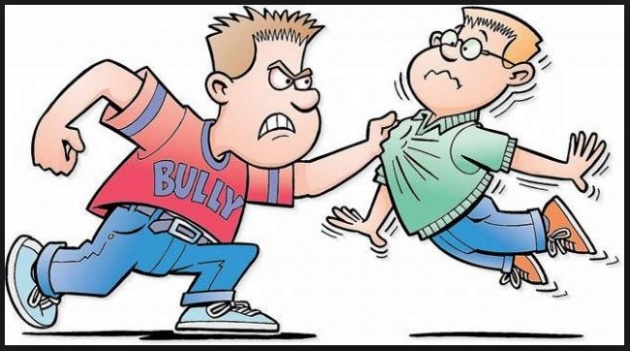 For a further definition : Physical bullying is when one person or a group of people picks on or harasses another person by confronting them face-to-face. It can range from subtle actions to casually degrade the person over time, to a series of more aggressive and direct acts to purposefully hurt the person in a more immediate manner. 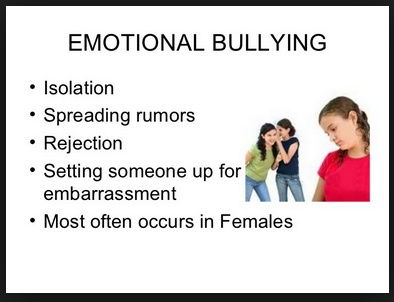 Emotional bullying can also be called Social Bullying or Relational Aggression because it sometimes involves a group of people.

This is any bully that is done with the intent to hurt somebody’s reputation or social standing. Social bullying often happens between friends. It can happen in two ways: either by trying to exclude somebody and make them feel unwanted, or by gaining somebody’s trust and then breaking it. Social bullying could include spreading a friend’s secret all over school to damage their reputation, or encouraging others to ignore, chastise, or threaten a friend. The movie Mean Girls (2004) shows many examples of this kind of bullying. This type of bullying is most common among girls, but can certainly happen with guys as well. In social bullying, the main weapons the bully uses are relationships. Source : http://respect2all.org 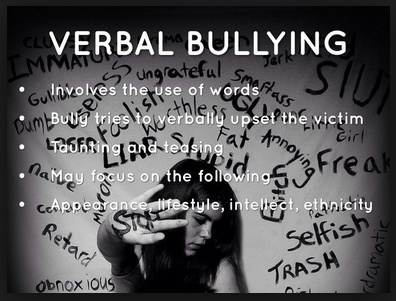 Verbal bullying is usually happening at the school where a student use superior strength and influence to intimidate other weak students. This type of bullying is the act where the bully is hurting someone through direct word. It can be in name calling ( using some  funny name to someone to humiliate him in front of others ), threatening, nasty or hurtful direct comments, racial slurs and rude remarks that usually be the person's name-mark for his whole life :( 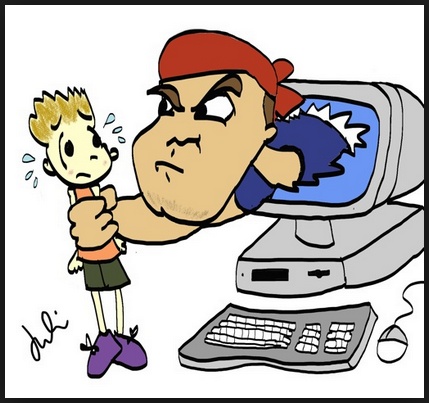 We are in the generation where high technological advancements are fast- changing that are indeed exposed us to the cyber world. The cyber world is the world existing because of the inter-computer generation. In accordance with this, Facebook, twitter, instagram, tumblr and even this site, bitlanders, are only a few lists of the legions of social media sites that are devoted in linking us to the rest of the world when cellular phone services aren't that enough.

In my own view, our so called freedom of expression on social media sites is the main reason why cyber bullying exists. Yes, almost all social media sites were created to help us to be connected to the other people across the world, and we join some sites because we want to express our self but please do bear in mind that we are all responsible for what we post. Be careful, especially in the cyber world because it may cause harm to yourself. 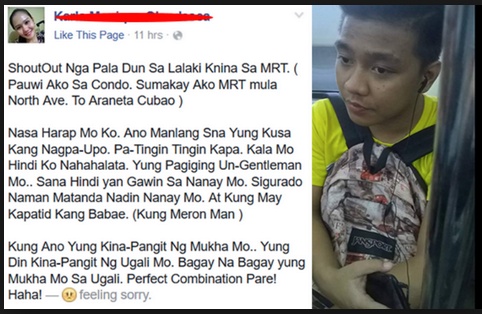 I was browsing my newsfeeds on facebook when this post (image above) caught my eyes. I admit that I, myself, want to comment bad words on her post but I resist, instead I just read the following comments on her post that made me think those were enough. This is one of those cyber bullying that's happening in our cyber world, because of her 'shame post', many netizens expressed their anger to her by dropping a lot of painful comments. She, herself made her big mistakes that lead to bullying.

Whether it is you who posted or not, the mere fact that we're exposed to the cyber world may lead to cyber bullying. Other people aren't thinking first before posting their content just like with what happened to the girl that was featured on magpakailanman that I already mentioned above. In this regard, it is good to know that we have now this CYBER CRIME LAW where people that are responsible for doing wrong that cause harm to someone can be punished. 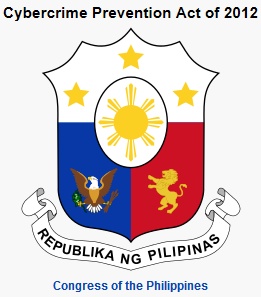 The Cybercrime Prevention Act of 2012, officially recorded as Republic Act No. 10175, is a law in the Philippines approved on September 12, 2012. It aims to address legal issues concerning online interactions and the Internet in the Philippines. 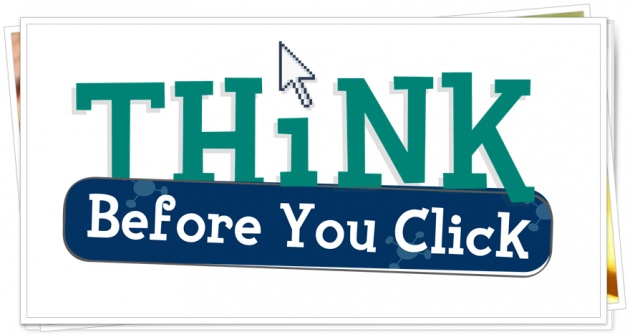 Years ago, I have seen this advertisement campaign on GMA 7 network which I think helped the netizens  to be more sensitive and be wise before posting. Campaign like this should be aired in order to remind people that " Once it's said, the web is fed". It is not only you and your friends can read what you've posted and not because you deleted a certain post it will be erased on web, actually that's was just an illusion . You may not see it in your page anymore but the truth is that was just generated to the so called mining or more known as the deep web where your content will be stored into a large storage that later can be used against you by the company or by hackers.

Going back to cyber bullying, here's another advertisement campaign that might touch your heart if ever your a bully or just planning to bully someone. Please give a chance to watch the video below.

Choose heart over hate! When someone is wrong on what she has posted (like what I've shared above), don't say bad words to her instead correct her to stop him in bullying someone and to be bullied by someone.

SAY NO TO BULLYING! 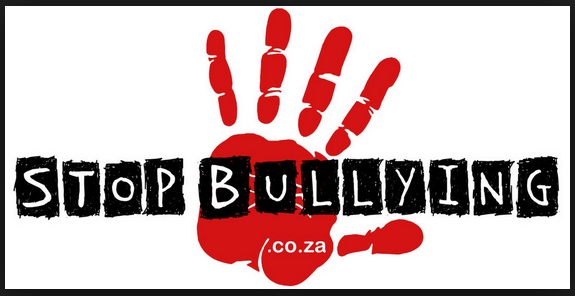 We have the right to be wrong, NOT TO DO WRONG!  I've been exposed to some social media sites and I've seen some cases of cyber bullying and just in case you don't know, it is not only the person whom you bully is hurting but also his relatives and friends. Perhaps, you should also know that you're not just hurting that person for awhile but you are taking his social life forever. Please stop bullying! it is just right for you to know that even karma is digital nowadays and cyber crime law has been implemented, so stop!

Note: The content of this blog is my original work, please don't plagiarize.