Dark matter could interact with other forces than gravity - study 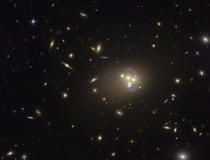 Cluster of galaxies Abell 9827 image made by Hubble

Dark matter, a hypothetical material that would form 85% of our universe might interact with other forces than gravity, according to researchers who have published studies on Tuesday in a British magazine, writes AFP.

"We found for the first time as (...) could affect things around her another way, through other forces," said Richard Massey, an astrophysicist at the Institute for Computational Cosmology, University of Durham, UK.

Theorized by physicists in the 1930s, dark matter is invisible and its existence is inferred indirectly through its gravitational effects on visible matter.

"It's embarrassing how little we know" about dark matter, comment Massey, who is also co-author of the study published by the Monthly Notices of the Royal Astronomical Society.

"So far, I knew almost nothing, now I added a small element of understanding," he said.

Based on observations made with the Hubble Telescope and the Very Large Telescope (VLT) of the European Observatory Austria (ESO), an international team of scientists analyzed the collision of four galaxies located in the center of a cluster of galaxies, at 1, 3 billion light years from Earth.

They noted that a cluster of dark matter is far behind one of the galaxies that surround a delay estimated at 5,000 light years.

"If (dark matter) was slowed during the collision, it could be the first indication of a dynamic".

"It's like you go through a fog and friction you get in this fog, which prevents you advanced," he explained.

"Dark matter (galaxy) took a different path and ended up in a different place," he continued, saying that the phenomenon is surprising because "we do not see this in any other galaxy."