On 19th March, I had an interview with Reinhard Keck, the news correspondent at "Bild am Sonntag".

They are making a report about women who are working as online business leaders and they found Roya and me as Afghan protagonists.

The job we have done for women in Afghanistan, which is women empowerment, provide them digital literacy and make them financially independent really impressed them.

I explained the story of how we established IT female BUSINESS COMPANY for first time in Herat, Afghanistan; the challenges that we faced and how became one of the most successful IT companies in Afghanistan.

Francesco Rulli CEO and founder of Film Annex became interested in what we are doing for women in Afghanistan through such a report made by NATO.

Considering the women situation in Afghanistan he, together with Afghan Citadel decided to start building computer rooms for female schools and connect them to world. Currently hundreds of students are using from these computers rooms and making online incomes.

Here is the English version of my interview in "Bild am Sonntag", German news paper with the title of "Days of War, Days of Hope":

“In one of the better neighborhoods of Kabul we meet Elaha Mahboob. She is in her mid 20's and has built with her sister Roya the online network "Woman 's Annex ". There, women can with blogs and self-produced videos generate money. Some contributors are paid in the digital currency Bitcoin . It seems bizarre to meet a manager of a start-up here. "The worst thing would be if the country will fragment," says Elaha. The corruption of elites prevents progress. For years, local authorities have enriched themselves, also with German aid money. But ahead of the election even Warlords sing songs of democracy. Wha's the use of voting if you can't trust the candidates? Elaha could easily get a job in the Silicon Valley, she even knows Sheryl Sandberg, the Facebook boss. What keeps her here? "It is my home. Here I have more opportunities to make change than elsewhere. "That is also freedom.

Asma is a fan of Real Madrid, she likes Cristiano Ronaldo and she's the goalkeeper of one of the few women's football teams in Afghanistan. To play football like her brothers in the streets, is unthinkable in a strict Islamic society. At the time of Taliban rule, woman would have been punished for any kind of sport. A few years before Asma's birth, the fanatics used the Kabul football stadium for executions. Today Asma and her friend Mona play football in a backyard, in relative secret. Their freedom is measured by the size of a football pitch.” 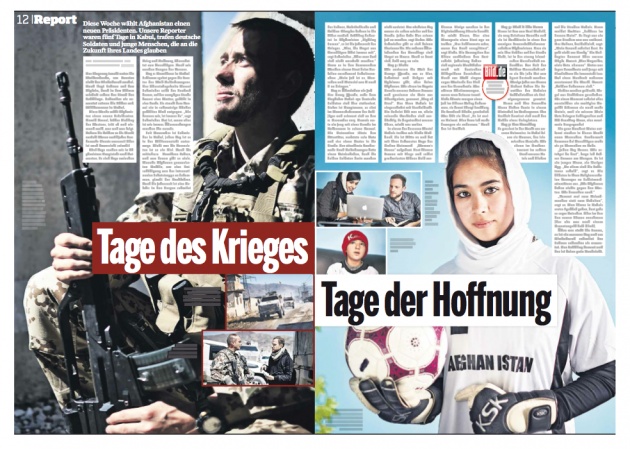 "Days of War, Days of Hope" by BILD am SONNTAG, German Newspaper

At the end I have a special thanks for Meiko (the photographer) who took very nice photographs of Esteqlal female team and me. 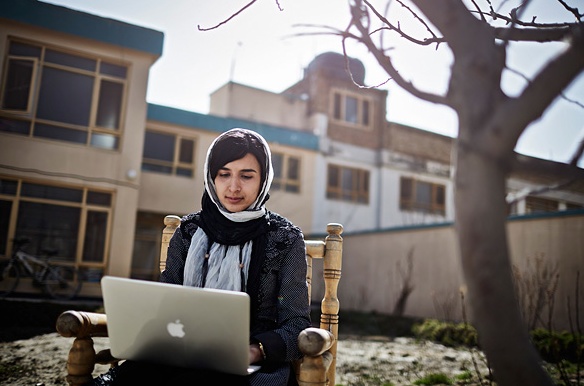 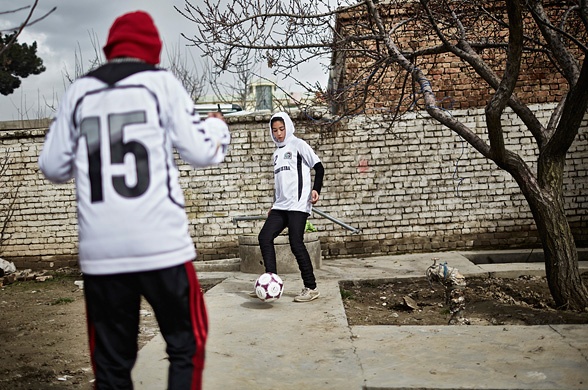