Demonstrators have brawled and lobbed grenades outside Ukraine’s parliament, killing one officer from the interior ministry’s National Guard and injuring up to 100.

The violence was in protest against a parliamentary vote to grant concessions to territories held by Russian-backed rebels.

The interior minister, Arsen Avakov, said one officer died from shrapnel wounds and around 10 more were seriously injured. Most of the protesters appeared to come from Svoboda, a far-right political party that was part of the Maidan movement which overthrew the president Viktor Yanukovych last year but did badly at the polls and only has a handful of MPs.

Kiev’s mayor, Vitaly Klitschko, called the unrest “a bloody provocation” and said those responsible should be brought to justice. It was the worst street violence in Kiev since the fatal crushing of the Maidan protests last year, whichresulted in more than 100 deaths and the ousting of Yanukovych.

After the subsequent war in east Ukraine led to at least 7,000 deaths, Ukraine promised “special status” to the areas of the eastern Donbass region, which are under rebel control, as part of theMinsk ceasefire agreement. But the concessions are controversial at a time when many in Ukraine believe Moscow is doing little to hold up its side of the bargain.

The parties in coalition with President Petro Poroshenko’s ruling party largely voted against the bill, giving it 265 votes in the 450-seat parliament. The final vote would require a two-thirds majority, as it involved changes to the constitution, MPs said. 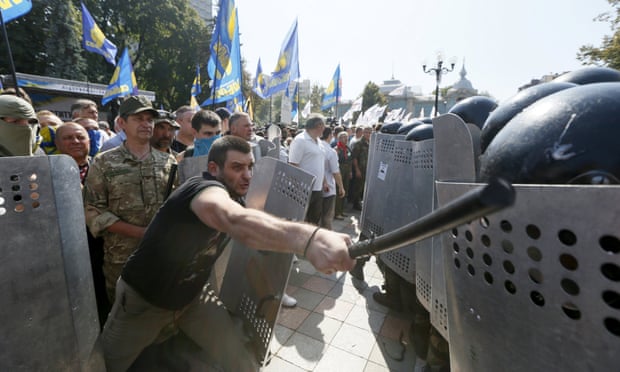 Mustafa Nayyem, a former journalist who helped to instigate the initial Maidan protests and is now an MP, said he did not support the constitutional amendments but was disgusted by the violence outside parliament.

“Grenades outside parliament is terrorism,” he wrote on Facebook. “Any political force which is proved to be linked to this should disappear from the political playing field, and its leader should bear personal responsibility for those who suffered.”

Talks are under way to set up a summit between Russian and Ukrainian leaders, with Franco-German mediation. Marathon overnight negotiations in February in Minsk, Belarus, led to a ceasefire agreement, but sporadic fighting has continued since, and Moscow and Kiev accuse the other of not fulfilling their obligations.

Kiev says Moscow is still supplying weapons and soldiers to the rebels, while Moscow accuses the Ukrainians of continuing to shell rebel areas and not removing heavy artillery from the frontline. Ukraine says it is only responding when the rebels attack, and the situation remains tense, with both sides primed for action.

The Russian president, Vladimir Putin, and his French counterpart, François Hollande, talked on Saturday, including about a possible summit with Poroshenko. The German chancellor, Angela Merkel, said she was open to the idea of another summit, but there would have to be the possibility of progress before she committed. 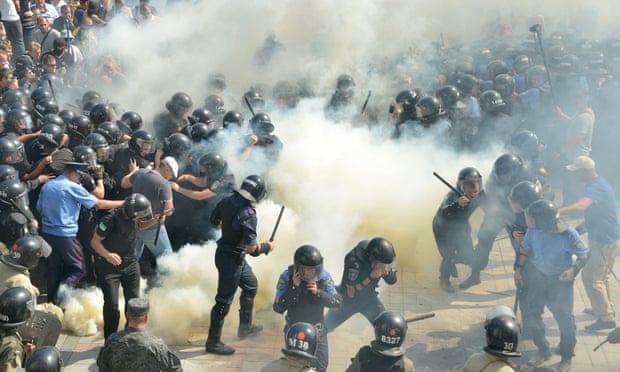 Opinion in Ukraine is split over what to do with the Russian-backed regions in the east. Despite official denials, Moscow has proved willing to send military and logistical reinforcements at crucial junctures, and Moscow sources confirm that the Kremlin will not allow the rebels to be militarily defeated.

Because of this, some feel Kiev should focus on reforms in the rest of the country and leave the rebel areas to their own devices; others feel Ukraine can never be secure while part of its territory is under rebel control, and demand a renewed military assault. Poroshenko has been urged by western countries to push through the constitutional reform.

Opponents of the reforms say pushing them through would reward the Kremlin’s actions. Russia has said the proposed changes do not go far enough, but even in their current form many feel they represent a dangerous capitulation to Moscow.

“The most important and fundamental reason is that there is a clause in the constitution that says it cannot be changed in times of war,” said MP Victoria Voytsitska from the Samopomich party, who voted against the law.

The party expelled five members for voting in favour of the law. “This provision was made to ensure an aggressor could not influence our constitution,” she said. “And although we do not have an officially declared war, if you look at what is happening in the east, at the president’s rhetoric, then it is clear that we have a de facto war.” 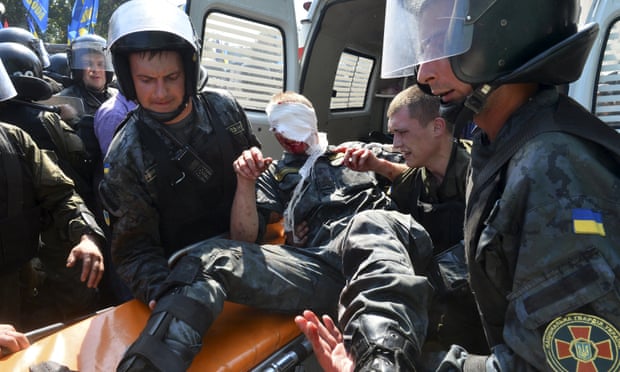 National guard officers carry an injured comrade on a stretcher outside the parliament building. Photograph: Reuters

Voytitska said offering special status to the rebel areas would be an implicit reward for the violent uprising and would be difficult to justify to other regions of Ukraine, setting off a domino effect that could destroy the country.

“For me, it’s like introducing cancer cells into a body that is already not as healthy as it should be. The cancer can spread very fast,” she said.

The changes are due to be voted on in further readings during the new session of parliament, which begins on Tuesday, but no date has been set and there were rumours the government had promised a pause of several months. However, after the first reading, the text of the amendments cannot be changed without beginning the whole process again.