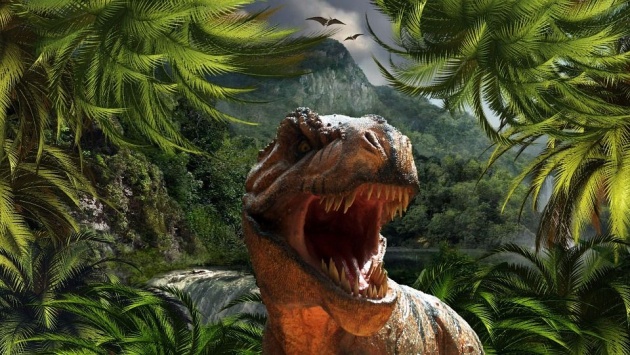 From my childhood I used to read stories and watch movies about dinosaurs. “Jurassic Park” is one of my favorite movie. My friend circle also knew about it, so few weeks back one of my friend told me about the “Marghazar Dino Park” in Islamabad. I got excited to visit there as soon as possible.

“Islamabad Zoo previously Marghazar Zoo, is an 82-acre (33 ha) Zoo in Islamabad capital Territory. It was opened in 1978, and is under the administration of Capital Development Authority (CDA) of Pakistan. The CDA, in order to provide a novel recreational facility to the residents of Islamabad has installed life-size sculptures of dinosaurs at an area of Marghzar Zoo. ”[1]

That area where these sculptures installed were further known as “Marghazar Dino Park” and people also say it “Dino Park” in short.

If you are interested to get more information about this Dino Park then follow the link given below:

I also browsed this website before my visit to Dino Park which developed my interest more to watch this park. Then finally, I got a chance on Eid vacations to visit Dino Park with my family. At my visit to “Dino Park” I got impress after seeing the life-size sculptures and I preserved the park memory in the form of photographs. On my return to home I planned to write blog about the amazing creature “Dinosaur”. 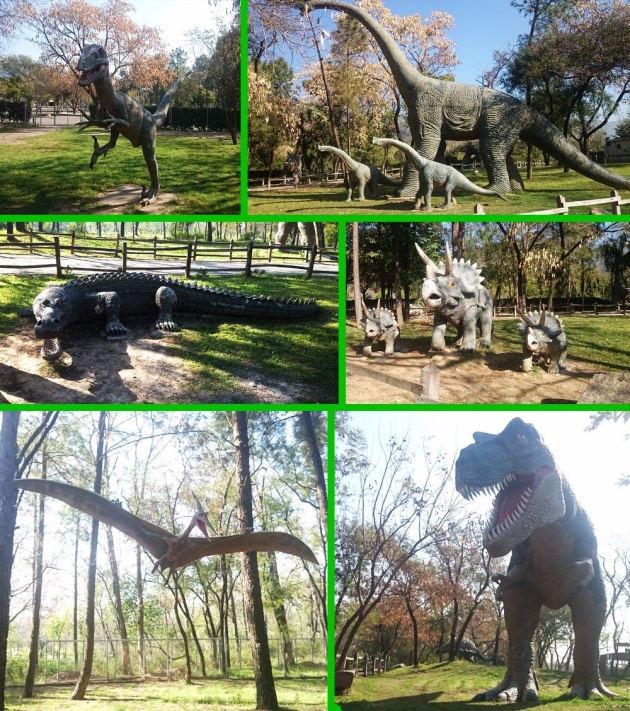 Picture Source: My own picture at "“Marghazar Dino Park” Islamabad

250 million years ago, when dinosaurs arose it was named "Triassic Period" (in which era dinosaurs were lived also known as the Mesozic era). Our world in which now we are living and working peacefully, was once dominated by Dinosaurs, they walked now where we walk. They breathed the same air, drank to same water and fought on the same battlefields. According to researchers and scientists dinosaurs ruled on the earth approximately one hundred thirty five million. And then they (dinosaurs) faced a most critical day of life that none of us can image. This is the story of the day their world ended. Scientists and researchers described numerous causes for extinction of dinosaurs. Some of scientists and researchers have suggested huge volcanic activity for extinction of dinosaurs, and others argue for a massive comet or large asteroid. But still according some scientists don't agree entirely on what happened.

In 1820, when scientist discovered the bones of a big lizard (Scientists named this Megalosaurus), which was buried in the English countryside. Richard Owen (Britain’s leading paleontologist) first examined bones of three different creatures named Iguana, Hylaeosaurus and Megalosaurus. From here he come to know these creatures were larger than any living reptiles on the earth. Some of them walked with their two legs, while others directly beneath their bodies instead of out to the sides. After gathering this information from these three creatures, Richard Owen first use the word dinosaurian (Greek word which means “Terrible Lizard”) for these creatures in 1842. 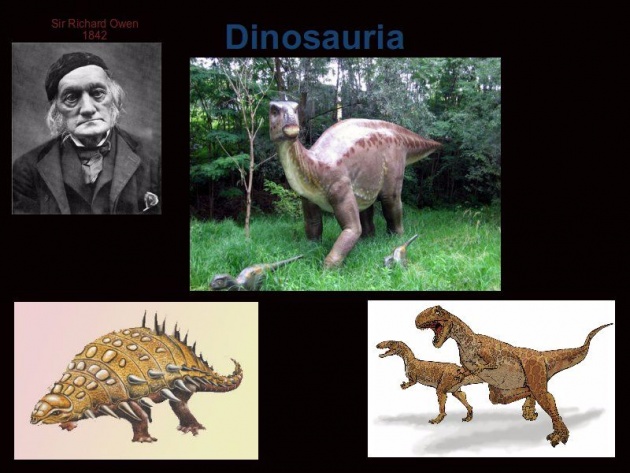 Since then the dinosaur fossils have been searched and found over all the world so then paleontologists started studying on these creatures to know more about the different types of these creatures that existed. From different dinosaur fossils scientists come to know that some of them had feathers, and some probably were covered with a strong type of body armor. They also find out that most of them hatched from eggs.

Harry Seeley (great paleontologist) divided dinosaurs into two groups by looking at their hip structure. [2] He further named these groups “Saurischia (Lizard hipped)” and “Ornithischia (bird-hipped)” in 1988. From there, dinosaurs divided into more different groups named as “Triceratops and Tyrannosaurus”[2]. In these groups every size of dinosaurs were exists in which smallest sized dinosaur named as Compsognathus and its size was about of a chicken. While the largest dinosaurs named as Ultrasauros, Argentinosaurus, Brachiosaurus and Seismosaurus and their size were fifty feet tall and hundred feet long.

What is the difference between bird and lizard hipped dinosaurs?

Types of Dinosaurs According to Other Paleontologists:

Dinosaurs further divided into three types which are Carnivores, Herbivores and Omnivores.

Carnivores: (An animal that eat meat of other animals) 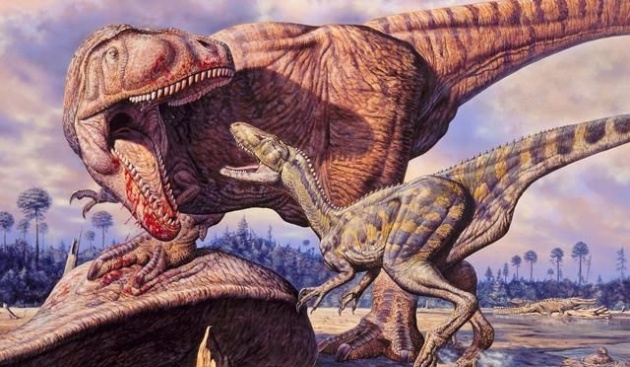 Herbivores: (These animals feeding on plants) 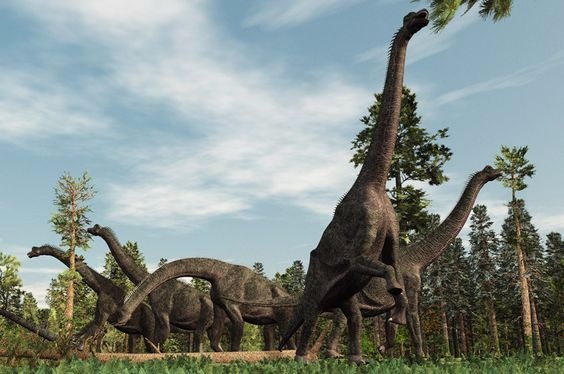 Omnivores: (An animal that eat both meats and plants) 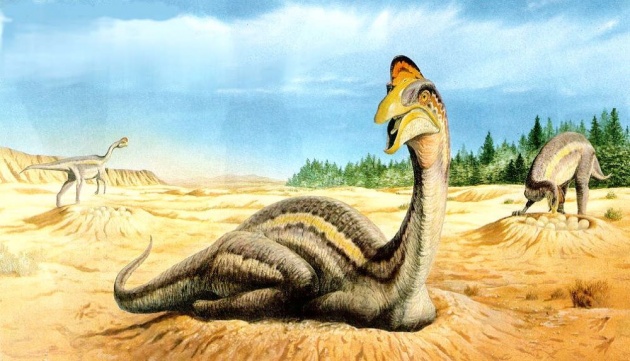 Some had primitive feathers.

Some had bumpy and think skin.

Some had spikes, crests, horns and armor plated.

People think that all dinosaurs lived together at the same time, but originally it is incorrect. According to researchers the era in which dinosaurs were lived known as the Mesozic era, which lasted many millions of years due to changes occurred in Earth’s landmasses. Due to this, many animals and plants evolved, while on other hand many seas were formed. Scientists divided Mesozic era into three main periods:

Two hundred million years ago in "Triassic period" all land of our planet earth had joined together as one great continent. Scientists named this great continent “Pangaea” (means all earth). In this period first mammals appeared. Pterosaurs, Rhynchosaurs and Shonisaurus lived in this period.

In Triassic period there were no flowering plants and was no grass. Cycads, ginkgoes and ferns grew near streams. 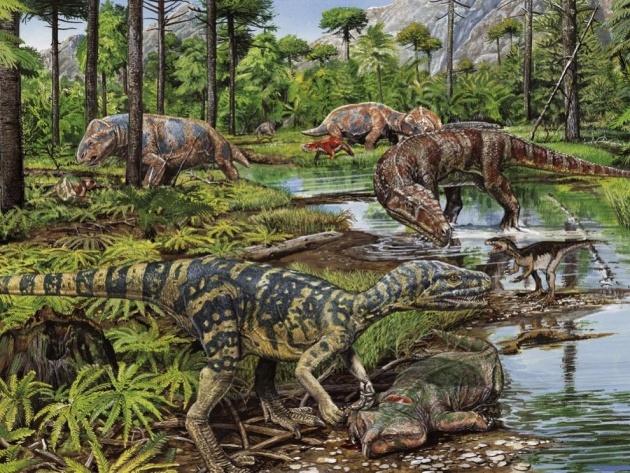 "Jurassic period" is considered middle period of dinosaurs. In Jurassic period Pangaea split into northern and southern land masses. Due to this two new continent came into being. During this period most of the dinosaurs were plant eaters but some of them ate meat. Brachiosaurus, Stegosaurus and Triceratops were plant eaters while Tyrannosaurus rex and Allosaurus were meat eaters. In this period first birds appeared like Pterosaurs.

Cycads, ginkgoes, giant horsetails and monkey puzzle trees were common plants in Jurassic period. In this period there were still no flowering plants and grass, just mosses and ferns grew on the ground. 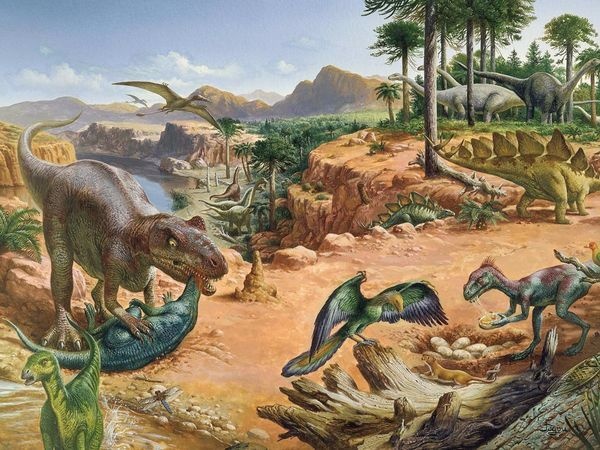 During the "Cretaceous period" which is also known as the last portion of the age of dinosaurs. Super continent (great continent) split into several smaller parts, in this period temperature of our earth becomes hot. In Cretaceous period, Pterosaurs ruled in the sky with others ancient birds. Small mammals ran on the ground. First snakes and lizards appeared then crocodiles and turtles flourished at that time. Walnut, oak, magnolia, maple, cycads and fens grew but, in this period there was still no grass. But at that time flowering plants appeared 1st time. 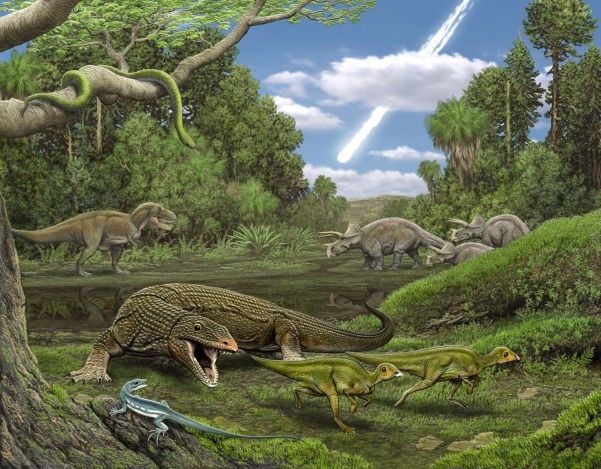 In 1676, when the first dinosaur’s bone was discovered by paleontologists, they thought these bones are of an elephant or perhaps any other strange creature. But in 1820, scientists realized these were the fossils of creature which they named Megalosaurus. After that Richard Owen (Britain’s leading paleontologist) named these creatures as dinosaurs. From here different myths were created by some of the scientists even though through TV documentaries and films. And I know like me after reading the detailed researches of paleontologists regarding dinosaurs, there are many questions that hit your minds like:

1) Did all dinosaurs the huge?

2) Did humans and dinosaurs live together?

3) What was the reason behind of their extinction and

4) Did all dinosaurs die out?

1) Did all dinosaurs the huge?

When you take name of these creatures, I know it tends to create images of large, giants and long dinosaurs.  As according to researchers weight of Tyrannosaurus rex was around more than five tones and height of this dinosaur was twelve meters long. Some researchers say its size was similar to an elephant, and it was not even the biggest as showed in the movies or some other places.

Same like other misconception created by researchers in our mind related to Sauropods (long necked plant eating dinosaur) which is that, its size equal to the Titanic ship OoPpSs isn't it interesting Guys :P…… but originally its size has been estimated thirty meters in length and eighty tones in weight. Protoceratops, its size was similar to a sheep. According to scientists, there were lots of small and medium sized dinosaurs. Like chicken sized Compsognathus ;).

2) Did humans and dinosaurs live together?

In some cartoons, books and movies it showed that dinosaurs and humans were lived together even though they hunted them as well. But according to researchers and scientists the last dinosaurs (other than birds) died almost sixty five million years ago. While on the other hand fossils of humans showed our ancestors are about six million years old.

3) What was reason behind of their extinction?

Most of the researchers present the reason of their extinction is an asteroid impact. But still some scientists and researchers not satisfy with this reason of their death. They present different reasons like acidic rain, tsunami, huge volcano activity and dust storm (Might be dust storm would remain for months or even decades).

4) Did all dinosaurs die out?

Researchers say because of the asteroid or other natural disasters all dinosaurs died about sixty five million years ago but, some small flying birds (which are technically dinosaurs) survived it.

Thanks for sparing time in reading My 28th attempt for my virtual home "BitLanders".... Stay Connected for more articles.....  ツ