Downton Abbey is an British/America television serial. It first aired in England in 2010 and in America in 2011.   For those who have not seen it, I suggest you do.  It is quite well done and rather interesting.

Firstly, it seems to follow the American less than 60 minute hour.  Some episodes are 42 minutes, some are 56.

Secondly, it has the slow paced British style where the development of the ambiance, the characters, the plot is important, not getting from Minute First to Minute Last.

Those familiar with American productions expect the fast paced, every word matters, lots of action.  The purpose seems getting to the point, using one or two dimensional characters as vehicles. Personalities are exposed by scraps of dialogue.

British productions take time.  There are conversations, as if the parties don't know what the other will say.  There are pauses, scans of the scenary. There is a slow camera and a general lack of haste.

For those who don't know the 3 second American cuts contra the 3 minute British pans of the environment, the contrast shouts and is quite entertaining.

For those who like to relish a presentation instead of getting it over with as quickly as possible, British productions are what you would desire.

Thirdly, it is a period piece.   It attempts to create the England of the early 1900s. This is after the long Victorian Era, followed by the Edwardian, which ended in 1910.

George V became King in 1910 and ruled until 1936  It was during his reign that socialism, Irish Republicanism, the Indian Independence movement, and women's rights.

As one ought note, George V was the first cousin of Tsar Nicholas of Russia, (who was executed) and Kaiser Wilhelm of Germany, who was defeated in World War I.

It was at this time in history, where most of Europe was related, either by blood or marriage.

The story of Downton Abbey begins with the sinking of the Titanic reported by telegraph. The reactions of those at Downton Abbey; a huge mansion occupied by the Crawley family and their servants, is significant, because the heir to Downton Abbey went down on the Titantic.

The beauty of period pieces is that they need not be 'politically correct', they need not preach, they merely need to expose life as it was in one tiny part of the world at a specific time.

The series was critically acclaimed both in the United States and England.  It went for six seasons; from 2010 until 2015.

This means that one can watch the entire program; all episodes, on one of the free online television broadcasting sites.

The viewer can watch as few or as many episodes as they can fit into their schedule, getting the full thrust of the program in a shorter time than the once a week one would experience on television.

Robert Crawley is the 7th Earl of Grantham, and the father of Mary, Edith and Sybil, and husband of Cora Crawley.

There is no male heir for he who was selected went down on the Titanic. The major question is who will inherit the estate, for there must be a male heir.

This historical quirk is central.

Robert Crawley does not believe the entail on the property can be removed, although even his mother the Dowager Countess, the repository of all that was, thinks there could be a chance.

The heir, a cousin of this Crawley has gone down on the Titanic, so another relative needs to be imported.

The Servants consist of the Butler, Mr. Carstair, Mr Bates Lord Grantham's valet,  Thomas Barrow, a male servant who is rather unpleasant as is Lady Cora's maid. The two are always scheming. 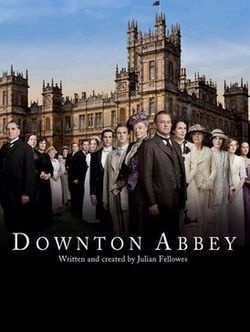 What happens downstairs contra what happens upstairs makes much of the plot. Those upstairs see the servants as 'applications'  although on occasion one becomes a bit more human to the Upstairs Staff.

Those downstairs plot and hurt each other, and on occasion cause tragedy for those Upstairs.

There are many characters who come in and out of the story in a very natural way.  They blend and remain, may go away, perhaps to War and either die or return.

As mentioned before, it begins in 1912 when the Titanic sinks and continues for thirteen years; that is until 1925.

The changes in society during this period are only understood if taken in sequence with some understanding of what was, what is, what will be.

Although one doesn't need a degree in history to watch the program, it would suit to have a familiarity with British society at the time.

All of those 'rules' that we in the ex-British colonies have learned, and often broken, were absolutely sacrosanct in those days.  How one acted, spoke, thought, behaved; what was acceptable and unacceptable.

Not that people didn't break the rules, but when they did, if they were rich, they were able to slip between the lines.  There could be blackmail later down, there could be reprecusions, but they can get from here to there without dislocation.

If a poor person, i.e. one from the 'Servant Class'  made a mistake, they were disgraced.

During the War, many of the Aristocrats did their part, and the family does so... one working on a farm, another as a nurse in hospital and then convalescent centre.

NOT GIVING AWAY THE STORY

This is a drama that is to be savoured.  Each episode is to be watched, and the culture of the time enjoyed or simply recognised.   The various events that occur in the World, their impact on Downton Abbey and its citizens, give you a feel for what life was in those days.

The acting is excellent, the events well documented.  Although the family doesn't exist, the characters largely fictional, the events are real.

What one takes from the story is how life was lived at the time.  This is more significant than who married (or didn't marry) whom, and what was done (or not done) for it is a time lost forever.

everlasting song from this century :D…

On April 10, 1912, the Titanic, biggest boat above water, left Southampton, England on her first tri…

Source: Google Leonardo DiCaprio is well known and successful American actress and producer.He was b…