Earth /ˈɜːrθ/ (also the world[n 5], in Greek: Γαῖα Gaia,[n 6] or in Latin: Terra[26]) is the third planet from the Sun, the densest planet in the Solar System, the largest of the Solar System's four terrestrial planets, and the only astronomical object known to harbor life.

According to evidence from radiometric dating and other sources, Earth was formed about 4.54 billion years ago.[27][28][29] Earth gravitationally interacts with other objects in space, especially the Sun and the Moon. During one orbit around the Sun, Earth rotates about its own axis 366.26 times, creating 365.26 solar days or one sidereal year.[n 7] Earth's axis of rotation is tilted 23.4° away from the perpendicular of its orbital plane, producing seasonal variations on the planet's surface with a period of one tropical year (365.24 solar days).[30] The Moon is Earth's only permanentnatural satellite. Its gravitational interaction with Earth causes ocean tides, stabilizes the orientation of Earth's rotational axis, and gradually slows Earth's rotational rate.

Earth's lithosphere is divided into several rigid tectonic plates that migrate across the surface over periods of many millions of years. 71% of Earth's surface is covered with water,[31] with the remainder consisting of continents and islands that together have many lakes and other sources of water that contribute to the hydrosphere. Earth's polar regions are mostly covered with ice, including the Antarctic ice sheet and the sea ice of the Arctic ice pack. Earth's interior remains active with a solid iron inner core, a liquid outer core that generates the magnetic field, and a convecting mantlethat drives plate tectonics.

Within its first billion years,[32] life appeared in Earth's oceans and began to affect its atmosphere and surface, promoting the proliferation of aerobicas well as anaerobic organisms. Since then, the combination of Earth's distance from the Sun, its physical properties and its geological history have allowed life to thrive and evolve. The earliest undisputed life on Earth arose at least 3.5 billion years ago. Earlier physical evidence of life includesbiogenic graphite in 3.7 billion-year-old metasedimentary rocks discovered in southwestern Greenland, as well as "remains of biotic life" found in 4.1 billion-year-old rocks in Western Australia.[33][34] Earth's biodiversity has expanded continually except when interrupted by mass extinctions.[35]Although scholars estimate that over 99% of all species of life (over five billion)[36] that ever lived on Earth are extinct,[37][38] there are still an estimated 10–14 million extant species,[39][40] of which about 1.2 million have been documented and over 86% have not yet been described.[41]Over 7.3 billion humans[42] live on Earth and depend on its biosphere and minerals for their survival. Earth's human population is divided amongabout two hundred sovereign states which interact through diplomacy, conflict, travel, trade and communication media.

Geological history
Main article: Geological history of Earth
Earth's atmosphere and oceans formed by volcanic activity and outgassing that included water vapor. The origin of the world's oceans was condensation augmented by water and ice delivered by asteroids,protoplanets, and comets.[49] In this model, atmospheric "greenhouse gases" kept the oceans from freezing when the newly forming Sun had only 70% of its current luminosity.[50] By 3.5 Gya, Earth's magnetic field was established, which helped prevent the atmosphere from being stripped away by the solar wind.[51] A crust formed when the molten outer layer of Earth cooled to form a solid as the accumulated water vapor began to act in the atmosphere. The two models[52] that explain land mass propose either a steady growth to the present-day forms[53] or, more likely, a rapid growth[54] early in Earth history[55] followed by a long-term steady continental area.[56][57][58] Continents formed by plate tectonics, a process ultimately driven by the continuous loss of heat from Earth's interior. On time scales lasting hundreds of millions of years, thesupercontinents have formed and broken up three times. Roughly 750 mya (million years ago), one of the earliest known supercontinents, Rodinia, began to break apart. The continents later recombined to formPannotia, 600–540 mya, then finally Pangaea, which also broke apart 180 mya.[59]

The present pattern of ice ages began about 40 mya and then intensified during the Pleistocene about 3 mya. High-latitude regions have since undergone repeated cycles of glaciation and thaw, repeating every 40–100000 years. The last continental glaciation ended 10,000 years ago.[60]

Predicted future
Main article: Future of the Earth
See also: Global catastrophic risk
Estimates on how much longer Earth will be able to continue to support life range from 500 million years (Myr), to as long as 2.3 billion years (Ga).[75][76][77] Earth's long-term future is closely tied to that of the Sun. As a result of the steady accumulation of helium at the Sun's core, the Sun's total luminosity will slowly increase. The luminosity of the Sun will grow by 10% over the next 1.1 Ga and by 40% over the next 3.5 Ga.[78] Climate models indicate that the rise in radiation reaching Earth is likely to have dire consequences, including the loss of the oceans.[79]

Earth's increasing surface temperature will accelerate the inorganic CO2 cycle, reducing its concentration to levels lethally low for plants (10 ppm for C4 photosynthesis) in approximately 500–900 Ma.[75] The lack of vegetation will result in the loss of oxygen in the atmosphere, so animal life will become extinct within several million more years.[80] After another billion years all surface water will have disappeared[76] and the mean global temperature will reach 70 °C[80] (158 °F). Earth is expected to be effectively habitable for about another 500 Ma from that point,[75] although this may be extended up to 2.3 Ga if the nitrogen is removed from the atmosphere.[77] Even if the Sun were eternal and stable, 27% of the water in the modern oceans will descend to the mantle in one billion years, due to reduced steam venting from mid-ocean ridges.[81]

The Sun will evolve to become a red giant in about 5 Ga. Models predict that the Sun will expand to roughly 1 AU (150,000,000 km), which is about 250 times its present radius.[78][82] Earth's fate is less clear. As a red giant, the Sun will lose roughly 30% of its mass, so, without tidal effects, Earth will move to an orbit 1.7 AU (250,000,000 km) from the Sun when it reaches its maximum radius. Earth was, therefore, once expected to escape envelopment by the expanded Sun's outer atmosphere, though most, if not all, remaining life would have been destroyed by the Sun's increased luminosity (peaking at about 5,000 times its present level).[78] A 2008 simulation indicates that Earth's orbit will decay due to tidal effects and drag, causing it to enter the red giant Sun's atmosphere and be vaporized.[82] 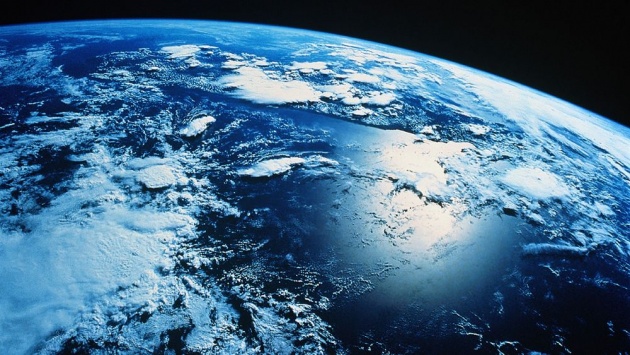