Eating Sweets From Taiwan For The First Time!

Got sweet tooth? Read on!

We all have a liking to sweet foods especially when we were kids. They're delicious, colorful, and fun to eat. Chocolates, cotton candies, marshmallows, gummies, ice cream, candies, etc. These sweet treats are heaven sent. However, too much of these is not good. It can damage our teeth especially on kids and could bring health problems for us adults. But then again, it doesn't mean that we shouldn't eat sweet foods. All we have to do is eat in moderation.

I GOT TAIWAN SWEETS! 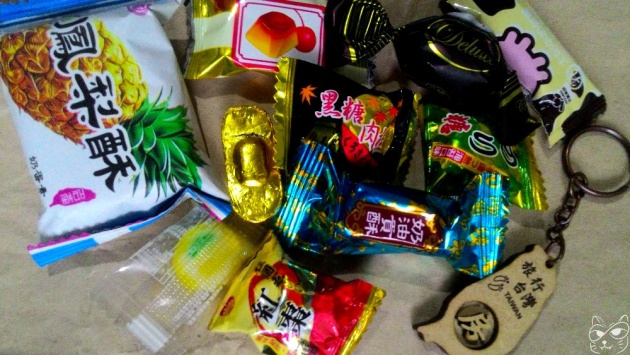 Mhaiiiself went to Taiwan for vacation a few months ago, and when we met last August, she gave me a few assorted sweets (mostly candies) she got from her vacation. The sweets also came along with a keychain of the map of Taiwan. So cute!

The first time I've tasted a candy similar to the Taiwan candies was way back elementary when a best friend gave me one. I can't remember which place was it from. Probably Hong Kong or China. Since this is Mhaiiiself's first gift from an out of the country vacation, I thought of writing a review about the candies she gave me. This will be an honest review and I hope my friend could read it someday when she comes back here.

(Note: I don't know the exact names of these foods since I can't read nor understand their language so I will just name them based from their taste or wrapper design. I will also rate them with stars to give you an estimation of how good it is, five being the highest and one being the lowest.) 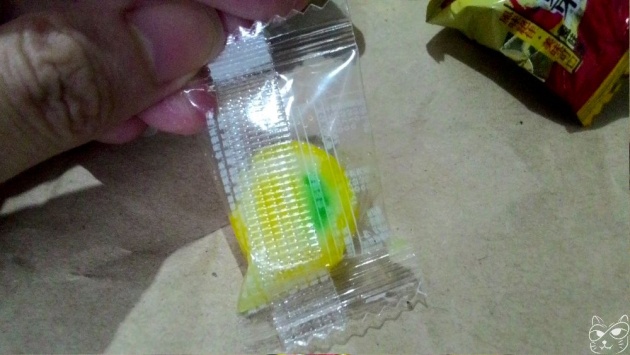 First on the list is the pineapple-flavored gummy candy. The appearance and texture is similar to the Filipino gummy candy called Potchi. However, this is the first time I tasted a pineapple flavor gummy, and it wasn't disappointing at all. The sweet and sour taste is there just like how a real pineapple fruit tastes. I like it! I also like the transparent wrapper, simple but nice. 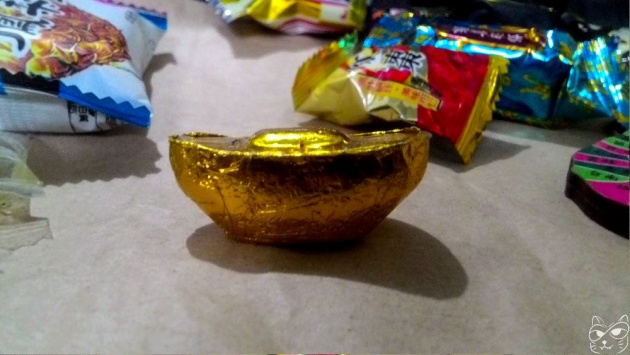 I can't completely determine the flavor of this food or what it really is, although I could taste a red bean on it with a tinge of chocolate. I love the taste though. It somehow reminds me of buchi, one of my favorite foods from a Chinese fast food chain here in the Philippines. 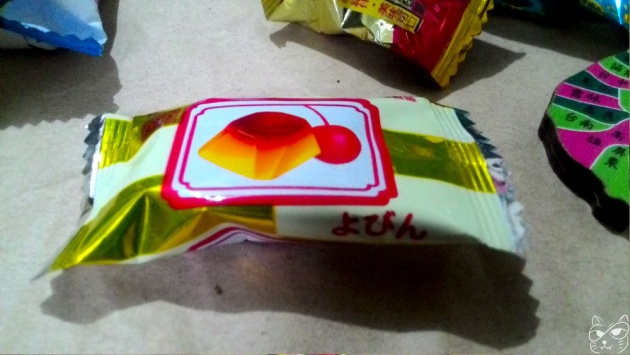 I was surprised to see some candies with Japanese characters written on it, one of which is this milk candy with the word "Yobin" on it. I thought these were Taiwanese candies? Do Taiwanese speak Japanese too? Upon looking on the internet, I found out that the Yobin might actually be the manufacturers name "Yeoubin."  I am not sure of the name of this candy but they categorize it as milk candy on the website so let's just call it that way. (Glad I can read Hiragana.)

Seeing the print on the wrapper, there is a custard pudding and a cherry which already gives a hint on how the candy would taste. So I tore the wrapper and tasted the candy. It was a chewy candy and well, it tastes like milk but a different kind of milk. How do I describe this? It smells like uncooked rice plus milk? I am not sure if uncooked rice is the best description for this but smelling it makes me think of rice. (Lol.) I didn't taste any cherry at all but this candy is delicious.

Next are two similar candies, so I grouped them together. The Sakura and Nori candies. Let's talk first about the Sakura candy. (left image)

I am sure the "Sakura" (cherry blossom) candy is not called Sakura. I just made that up because the wrapper has sakura flower prints and I have no clue what candy this is. Well, it might be sakura-flavored but who knows. The wrapper looks beautiful and it has a Japanese text written on it too. It says "おいしい" meaning "delicious." So I took the candy in my mouth with high expectations because it says it's delicious. It was not delicious, for me. I don't know how to describe the taste at all. I haven't tasted any sakura-flavored food before so I am not sure. Maybe this is tea-flavored candy? My taste buds didn't appreciate this candy.

Next is the Nori or seaweed candy. (right image) This one tastes better than the Sakura candy, but not very far from each other. The candy has black bits which I assume is the seaweed. This candy does taste like seaweed and I did like it better than the other even though having a nori in candy form feels weird. In addition, the Sakura and Nori candies are quite huge. I feel like I would be in big trouble if I choked with it. Elders and children should be careful while eating this.

This candy is similar with the Sakura and Nori but I separated it since it was my mom who ate it. Again, I am also not sure of the name but it has Hiragana characters too which reads "Kuro satou" which translates to "Black Sugar." "Kuro" means black while "satou" means sugar. I'm quite skeptical with the translation of "satou" since it could mean something else. But since this is a candy, let's just assume it means sugar. (I'd be glad if anyone can help me confirm this.)

Looking at the wrapper, it has a design of a house and autumn leaves. The black background also gives me a hint that this one is quite different from the other two. I assumed this one could be coffee-flavored with bitter taste or a dark chocolate-flavored candy. I was wrong. My mom said it tastes a bit spicy. What? Spicy?! 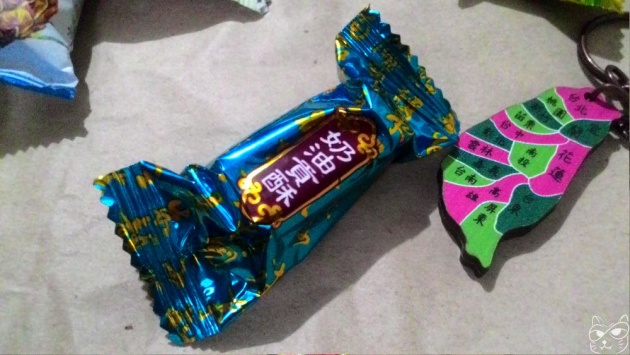 Moving on to the next is another candy I do not know what is called so I'll just call it a "candy-coated biscuit." This one got me surprised on my first bite. The outer layer is a thin layer of candy which smells like the Yeoubin milk candy. Its hard thin glaze breaks softly when bitten and it tastes good. I could eat it alone even without the biscuit. I don't know what it's made of. Meanwhile, the biscuit with a flake-like texture tastes a little like peanut. I'll say, the biscuit and candy coating goes well together. I love it. And to tell you, this one is my most favorite among the candies! 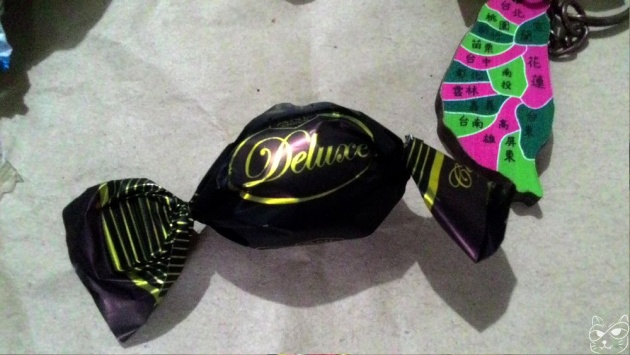 Next one is a "Deluxe" chocolate. From the word "deluxe," one would surely expect a good taste from this chocolate. Well, the taste is good but not the best though it wasn't disappointing too. The taste was actually new for me, it seems like there is a roasted taste somewhere in the chocolate which is interesting for me. 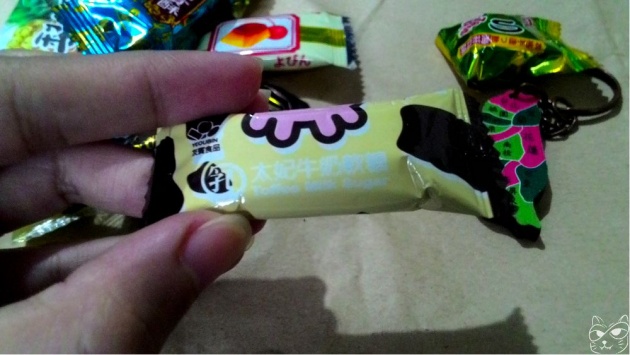 Seeing the wrapper of this Toffee Milk Sugar by Yeoubin is enough to tell you what this is. The cow spots and udder will definitely make you expect for a milky candy. Honestly, it didn't taste much different from the Yeoubin milk candy I've first mentioned. It's milky and also has that uncooked rice smell. It's chewy too. Maybe the milk candy's smell of Taiwan really smells like that, probably because of other ingredients. But I love the smell. Wish I have a perfume with that kind of smell. (Haha!) 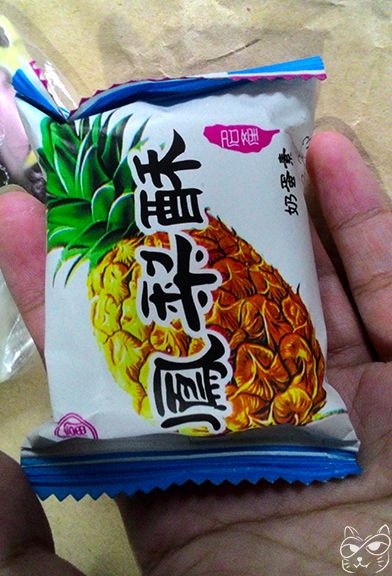 Last but not the least is the pineapple cake which I don't know what it's really called because there is no English translation included. However, you'll know it's something with pineapple because of the huge pineapple print on the wrapper. Upon researching while writing this blog, I found out that pineapple cake is a popular delicacy of Taiwan. Interesting!

Going back to the pineapple cake I am reviewing, the pineapple inside the bread was a jam. It tastes okay but not very disappointing. However, I didn't like how the bread is so crumbly. I made a little mess while eating it. The bread is shaped like a pineapple, by the way. So cute!

I think I'd still go for the Philippine candies. Taiwan candies aren't that bad though. I think they just taste a little different (like the nori and "sakura" candy) compared to the candies and sweet foods in my country. Remember, I only have the foods that were given to me as my basis so there are probably other sweet treats which tastes better. But no doubt, I really like the milk candies of Taiwan and that crispy thin layer of candy on a biscuit. I'll never forget that!

There's one thing that I realized after eating these sweets. Countries really do have their own unique palates just like how they are different in culture and beliefs. Thanks Mhaiiiself for sharing me a bit of Taiwan with these sweets! I had a great time even though the roof of my mouth felt sore after eating them. I now feel interested to taste other Taiwanese foods!