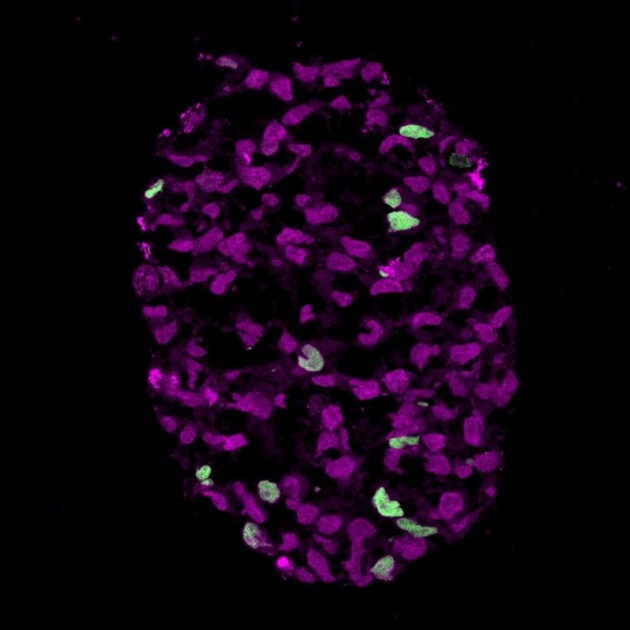 Scientists at the University of Cambridge working with the Weizmann Institute have created primordial germ cells -- cells that will go on to become egg and sperm -- using human embryonic stem cells. Although this had already been done using rodent stem cells, the study, published in the journal Cell, is the first time this has been achieved efficiently using human stem cells.

When an egg cell is fertilised by a sperm, it begins to divide into a cluster of cells known as a blastocyst, the early stage of the embryo. Within this ball of cells, some cells form the inner cell mass -- which will develop into the foetus -- and some form the outer wall, which becomes the placenta. Cells in the inner cell mass are 'reset' to become stem cells -- cells that have the potential to develop into any type of cell within the body. A small number of these cells become primordial germ cells (PGCs) -- these have the potential to become germ cells (sperm and egg), which in later life will pass on the offspring's genetic information to its own offspring.

"The creation of primordial germ cells is one of the earliest events during early mammalian development," says Dr Naoko Irie, first author of the paper from the Wellcome Trust/Cancer Research UK Gurdon Institute at the University of Cambridge. "It's a stage we've managed to recreate using stem cells from mice and rats, but until now few researches have done this systematically using human stem cells. It has highlighted important differences between embryo development in humans and rodents that may mean findings in mice and rats may not be directly extrapolated to humans."

Professor Surani at the Gurdon Institute, who led the research, and his colleagues found that a gene known as SOX17 is critical for directing human stem cells to become PGCs (a stage known as 'specification'). This was a surprise as the mouse equivalent of this gene is not involved in the process, suggesting a key difference between mouse and human development. SOX17 had previously been shown to be involved in directing stem cells to become endodermal cells, which then develop into cells including those for the lung, gut and pancreas, but this is the first time it has been seen in PGC specification.

The group showed that PGCs could also be made from reprogrammed adult cells, such as skin cells, which will allow investigations on patient-specific cells to advance knowledge of the human germline, infertility and germ cell tumours. The research also has potential implications for understanding the process of 'epigenetic' inheritance. Scientists have known for some time that our environment -- for example, our diet or smoking habits -- can affect our genes through a process known as methylation whereby molecules attach themselves to our DNA, acting like dimmer switches to increase or decrease the activity of genes. These methylation patterns can be passed down to the offspring.

Professor Surani and colleagues have shown that during the PGC specification stage, a programme is initiated to erase these methylation patterns, acting as a 'reset' switch. However, traces of these patterns might be inherited -- it is not yet clear why this might occur.

"Germ cells are 'immortal' in the sense that they provide an enduring link between all generations, carrying genetic information from one generation to the next," adds Professor Surani. "The comprehensive erasure of epigenetic information ensures that most, if not all, epigenetic mutations are erased, which promotes 'rejuvenation' of the lineage and allows it to give rise to endless generations. These mechanisms are of wider interest towards understanding age-related diseases, which in part might be due to cumulative epigenetic mutations."

i am zoya from pakistan