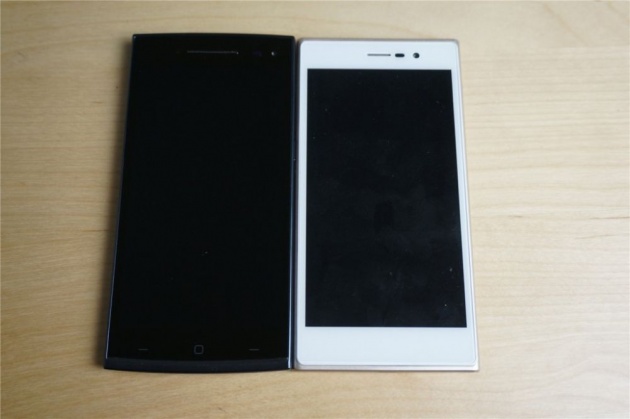 We have seen a number of devices from both Elephone and Doogee in the past few months. However, Elephone’s G6 and the Doogee DG900 have been particularly popular among buyers. That’s why we decided to put the G6 against the Doogee Turbo2 DG900 to see which one comes out as the winner.

We will be comparing both the devices on a number of different aspects like design, battery life, display etc. So, without wasting any more time, lets take a look at the similarities and the differences between the two Chinese handsets.

The first thing you notice about a phone is its overall design and hence, it seems right to start with this category first.

Elephone G6 and Doogee DG900 have two different design profiles, which make them harder to compare. While the G6 features a traditional design, that we have seen in many recent smartphones i.e. a rectangular body with soft touch plastic (quite similar to the OnePlus One), the Doogee DG900 comes with curved sides on a rectangular body. There are some additional lines on the back alongside the camera which gives it a distinct look.

So, on the design front, we can’t really pick out a winner. Both the devices are well built and looks premium too, hence we guess its a tie.

If you loved the OnePlus One’s design, you’ll love the G6. But if you like a Lumia kind of design, then you will most likely prefer the DG900.

Now, lets take a look at the second most prominent part of a phone i.e. its display.

Both the smartphones come with a 5.0 inch display, however the resolutions are significantly different. Doogee DG900 comes with a higher Full HD 1920 x 1080 pixel resolution while the Elephone G6 just features a HD 1280 x 720 pixel resolution screen. So, DG900 is much more sharper than G6. However, even with a higher resolution screen, the colors on the DG900 looks washed out. On the other hand, Elephone G6′s display is more natural looking and rich in colors.

So even though the DG900 comes with a better resolution, we personally like Elephone’s 720p display. Therefore, this category goes to the Elephone G6.

There’s another reason we picked the G6′s display over DG900 but we’ll reveal that in the next section i.e. hardware.

Meanwhile, take a look at displays on both the devices. The left one is the Doogee DG900 while on the right is the Elephone G6.

Both the DG900 and the Elephone G6 sport similar hardware, but there are some areas where the DG900 has an edge over the latter.

Both come with Mediatek MTK6592 Octa Core CPU with Cortex A7 Cores clocked at 1.7Ghz. The G6 comes with a slightly better GPU– Mali 450 as compared to the Mali 400 found on the Doogee model. However, the DG900 comes with a much larger RAM module, a 2GB one unlike the 1GB found on the G6.

As for storage, you get 16GB on DG900 and 8GB on G6. Both have external memory card slots which support cards up to 64GB in size.

While the hardware on the DG900 is much better than on the G6, especially due to its 2GB RAM, the MTK6592 chipset on the Doogee phone struggles to power the Full HD 1080p screen. As a result, even with the extra RAM, on personal experience, we have seen that the G6 is much more responsive than DG900. There’s only a slight difference between the performance of the two, but its noticeable.

Also, with the extra pixels that the Doogee model has to power, the device gets heated up too pretty easily.

On our initial Doogee DG900 review, the Doogee DG900 scored well over 30,000 as compared to Elephone G6′s score of 25,886. However,to our surprise after a few days of usage, when we tested the phone again, the DG900′s Benchmark score fell to 25,227. That’s around 5000 points lower than the initial figure which worried us. Also, the phone became slower with use. It may have been an issue with this specific model but still we were dissapointed.

As a result, even with the better 2GB RAM onboard, we prefer the Elephone G6 when it comes to hardware and performance.

Camera is yet another important aspect of a smartphone and in this category, Doogee DG900 is slightly better than the G6. This is due to the fact that, DG900 comes with a 13MP Sony IMX135 sensor as compared to the 13MP found on the G6. For the front camera too, the former comes with an 5MP shooter while the latter comes with just a 2MP sensor.

Images from the DG900 are much better and natural looking than the G6. The images captured on the Elephone model are quite darker than the Doogee phone, so low light pictures especially look better on the latter.

We have included a few sample pictures below for comparison.

As you can see, the pictures captured by the G6 are not that bad and quite comparable to Doogee DG900, but still the DG900 takes better pictures majority of the time and hence, this section goes to the DG900.

The DG900 comes with a larger 2500 mAh battery as compared to the 2250 mAh one found on the G6. But in real time usage, Elephone G6 managed to squeeze in much more than 7 hours that we got from the DG900.

However, the Doogee model does have a fast charge feature which enables it to charge fully within 2 hours.

It hard to pick a winner in this category especially because of DG900′s fast charge feature. So, we leave that for you to decide what you want, a slightly better battery or a faster charging option.

As for the software, both run on Android 4.4 Kitkat version.

However, the Elephone G6 does have an added advantage. It comes with a finger print sensor which clearly gives it an edge over the Doogee Turbo2 DG900. In fact, this particular features makes it a much attractive option than many other costlier alternatives in the market.

However, instead of a finger print sensor, the DG900 has a rear touch panel which can be used to open up the camera and click pictures.

Both the phones have similar specifications with the Doogee DG900 having better specs in some areas. However, when it comes to real life performance, the cheaper Elephone G6 manages to match DG900′s performance. In fact, it’s even better than the latter in some areas like display, performance and battery life. Elephone G6 is priced at $119, which is almost $100 cheaper than Doogee DG900, if you don’t want to spent more for the same specs on a phone for it’s design, then Elephone G6 must be a good choice.