Ellen DeGeneres to Host the Oscars for a Second Time! 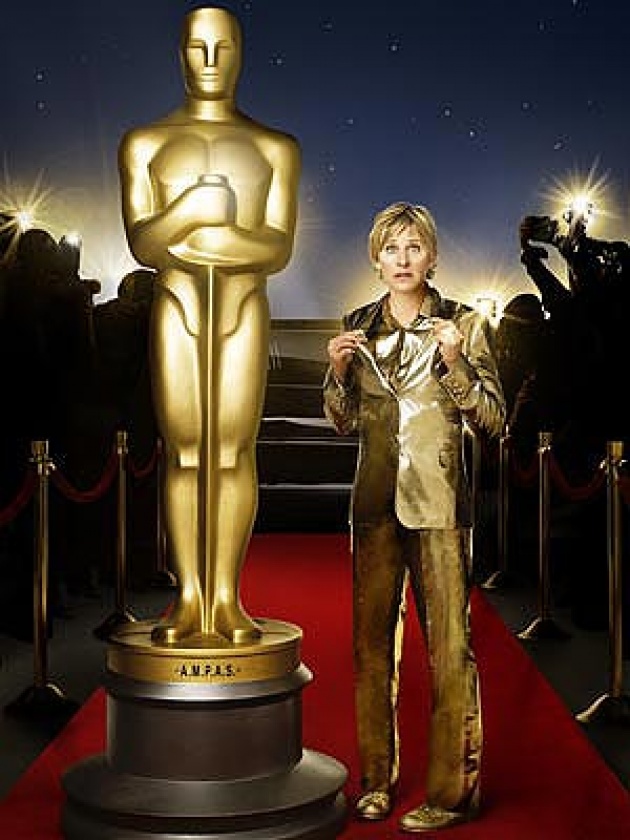 Ellen DeGeneres hosted the Oscars in 2007 and now they want her back for the 85th Academy Awards!

The TV icon will return to host the Oscars for a second time according to producers Craig Zadan and Neil Meron.  And we'll see her in action for the live broadcast of the Academy Awards on March 2, 2014.

From what I could remember, she did a good job hosting the Oscars before although many critics were split about her performance.  Bill Goodykoontz of the Arizona Republic was not a fan saying that, "You know it's going to be a long night when Al Gore's the funniest person in the room. ... Ellen DeGeneres's lowest-key performance made for a slow, slow show."  Ouch!

But Alessandra Stanley of The New York Times said Ellen was cheeky "but good-natured, far less barbed and sardonic than Jon Stewart last year or Chris Rock in 2005. ... As she sometimes does on her daytime talk show, Ms. DeGeneres cruised the aisle with a microphone, chatting idly with Martin Scorsese and Clint Eastwood – bringing a casual Friday mood to Fancy Sunday."  Yes, I remember that bit.  That was funny!

And of course, Zadan and Meron agreed sayinn they are thrilled to have Ellen host the Oscars.  They further said, "As a longtime friend, we had always hoped to find a project for us to do together and nothing could be more exciting than teaming up to do the Oscars. There are few stars today who have Ellen's gift for comedy, with her great warmth and humanity. She is beloved everywhere and we expect that the audience at the Dolby Theatre, and in homes around the globe, will be as excited by this news as we are."

I'm looking forward to seeing Ellen again at the Oscars!

Here's the rest of the press release from the Academy:

"I am so excited to be hosting the Oscars for the second time. You know what they say - the third time's the charm," said DeGeneres.

"I agreed with Craig and Neil immediately that Ellen is the ideal host for this year's show," said Cheryl Boone Isaacs, Academy President. "We're looking forward to an entertaining, engaging and fun show."

"Ellen is talented, wonderfully spontaneous, and knows how to entertain a worldwide audience," said Dawn Hudson, Academy CEO. "She's a big fan of the Oscars; we're huge fans of hers. It's a perfect match."

"It is an honor to welcome back Ellen DeGeneres as the host of the biggest entertainment celebration of the year," said Paul Lee, president, ABC Entertainment Group. "She is the consummate entertainer, equally beloved by her peers in the industry, movie fans and television viewers. We very much look forward to having her back on ABC for Oscar Sunday."

DeGeneres hosted the 79th Academy Awards in 2007, for which she received a Primetime Emmy® nomination for "Outstanding Individual Performance in a Variety or Music Program."

DeGeneres has made a home for herself in daytime with her hit syndicated talk show, "The Ellen DeGeneres Show," which has earned a total of 45 Daytime Emmys during its 10 seasons.

DeGeneres' began her career as an emcee at a local comedy club in her hometown of New Orleans. Her acting career in television included roles in several successful sitcoms before being offered a part on "These Friends of Mine" by ABC. After the first season, the show was renamed "Ellen." Running from 1994 to 1998, the show garnered record ratings, with DeGeneres receiving Emmy nominations each season in the Best Actress category. In 1997, DeGeneres was the recipient of the coveted Peabody Award as well as earning an Emmy for writing the critically acclaimed "Puppy Episode" when her character came out as a gay woman to a record 46 million viewers.

Academy Awards for outstanding film achievements of 2013 will be presented on Oscar® Sunday, March 2, 2014, at the Dolby Theatre® at Hollywood & Highland Center® and televised live on the ABC Television Network. The presentation also will be televised live in more than 225 countries and territories worldwide.