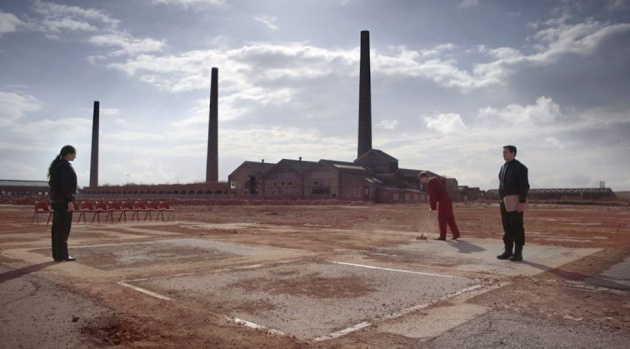 It all began with a chair. Actually there were three of them in the front row for my fellow jurors, Jon Olav Stokke, Miriam Lee and I in the basement of the popular Juno Bar in London’s Shoreditch, or South Hoxton, as the locals sometimes call it (that’s Soxton in my book). We were there on the invitation of Shorts on Tap, a showcase for filmmakers of every description. The organisers accept films of any genre and any length. Then they package the work in groups of ten under a general theme for public consumption. The theme I was asked to judge was ‘Absurdia’ (must be the scarf, or the funny voice) but in reality they verge on the surreal.

How would you know a surrealist film if it hit you in the face? That would be Dada! If you have seen a film by any of the following directors - Maya Deren, Luis Buñuel and David Lynch – then you have experienced surrealism. If you see David Moyes coaching strawberries – he’s out of a job, it could happen – then that’s surrealism. The surreal is any pictorial art that represents reality in an abstract way using recognisable objects in unusual settings or scenarios. In cinematic art, narratives unfold with the logic of a dream. You look inside my mouth and see the blades of a lawnmower; that’s surreal. Actually, that’s how I was left after my cardiac arrest in 2011 – thank you Royal Marsden Hospital for removing my teeth without my permission – but that is another set of jacket potatoes in firemen’s attire.

Our mission was simple: pick the best three movies out of a programme of ten. But what if there aren’t any? Well, lower the bar. Fortunately, we didn’t have to do that, but after the first half of the programme I started to worry.

First up was ‘Manufactured Britishness’ (pictured) by Kristina Cranfeld, best described as a thirteen and a half minute ‘comic’ series of set pieces in which immigrants hoping to become naturalised citizens of the United Kingdom undertake citizenship tests unlike any seen in the Home Office quiz book. There is a good idea for a movie here, but it wasn’t executed for the most part with any clear satirical bite. Applicants were garbed in either red, white or blue (the colours of the British flag). They undertook physical exercises in a location that resembled the foot of the White Cliffs of Dover. They queued up, spilt potatoes, recited the names of plants, built a wall (without cement) that then collapsed and endured hot water being poured on them from a tea pot. The latter scene was the only moment where the film hit its mark, mainly because it was photographed in medium shot and there was a clear disconnect between activity and response – endless apologising. It ended with the British flag being raised. This description suggests much more coherence than the film demonstrated. It was simultaneously over-thought and not thought out enough. The satirical point could have better made by having potential immigrants being trained to teach in British schools or hospitals or work for below the minimum wage, or have a thankless job as an au pair; in other words to fulfil the roles that a local workforce was unwilling to take. It was too abstract a take on a problem that deserves examination. So: plus points for ambition, choice of subject and production values; minus points for realisation.

The second film, ‘Nightmare’ by Emma Smith, featured a burning doll. It was a metaphor for – well, anything you like really. A montage is not a movie; Emma Smith’s film was without credits.

Fanny Hoetzender’s ‘Backyard Oasis’ reminded my fellow juror Jon of Frank Perry’s THE SWIMMER. Not that it featured a Burt Lancaster lookalike swimming the lengths of his neighbours’ swimming pools, one after the other. Rather it featured four swimming pool scenes, one featuring gossipers, another showing a lone girl (described in the credits as Lolita) sunning herself, the third a woman jumping into a pool where there was a figure floating face down, the fourth had a swimmer in Marshall Street baths in Central London. All of the compositions were in long shot; you imagined Hoetzender might have seen David Hockney’s and Jack Hazan’s A BIGGER SPLASH. Water is of course a symbol of female sexuality; a woman is confident in herself if she is confident in water. The film was a series of contrasts rather than a developed idea; at times it was a study of disinterest. The distanced camerawork is a signifier of feminist intent, female bodies not displayed as spectacle for the male gaze but located in a larger landscape. The problem with this sort of technique, quite apart from signifying unpleasure, is that it encourages passive viewing. Loosely translated this means: ‘I’m not going to bother to try to understand what I am watching; bring on the next movie.’

After a Q and A session with Ms Cranfeld – ‘where did you film it?’ ‘I had to sign a non-disclosure agreement’ – we were treated to three more films. By the director’s own admission, Michael Davies’ ‘Media Abscess’ did not have a pre-determined shape. On a literal level, it is about a middle aged woman who looks up the Hearn Islands on Google Maps (courtesy of her i-pad) and then opens up her loft to be confronted with a screen looking down at her, reflecting a rush of images. The film was most successful, which is to say it offered visual pleasure, when it was completely abstract, as when we appeared to be watching a duvet revolving in a tumble dryer. Maybe I’ve spent too much time in launderettes over the years, but I was happy to watch this shape going round without wanting to know what the shot meant. Answers please on a Facebook comment.

Joseph Murrell’s ‘Empyrean’ featured a naked man (played by the director) dissolve into a tree which revolved. A seed opened then closed again, representing the circle of life, as opposed to ‘hakuna matata’, which means ‘it’s a pop video’. It was stylish and threw some interesting shapes, but it is best remembered as a form of a screensaver. Put another way: when you put a CD into the DVD drive of your home computer – I’m showing my age now – it plays a funny swirling image. Murrell’s film was a bit like that.

James Burt’s ‘Regeneration’ has nothing to do with the Pat Barker-penned trilogy of books about World War One, though it was inspired by a short story about a woman pursued by a monster that she dares not turn round and face (it’s called Mother Time). Burt’s film opens with the camera approaching lapping water, and then shows us walkways and subways - filmed I imagined at the Barbican Centre and around Blackfriars – over which he illustrates glaucoma. In the middle section we see a laptop in a parking space and the silhouette of a bird as if seen through glass. I had no idea what the images meant but it was visually interesting and only lasted 8 minutes, as opposed to the 12 minutes of ‘Media Abscess’.

By this time, you might wonder whether there were any filmmakers out there capable of expressing or communicating pleasure. Fortunately, there was life in the last set of movies. Michael Middleton Downer’s ‘Top Hat’, which was my personal favourite, featured a boy being given a hat to dry clean by a tall circus man. He shrinks it and is horrified. Fortunately, when the customer returns, he too has shrunk. You could see that that the boy hadn’t shrunk the hat – no headwear was damaged in the making of the movie - but the idea was well conveyed. It had a perfect narrative structure: task, predicament and surprising resolution. Hooray for storytelling!

Ralph Matthews’ ‘I’m Happy Just to Lie’ was another pop video but this featured a woman being pursued by a yeti-like creature. It wasn’t based on the same story as ‘Regeneration’ but it could have been. Poppy, accomplished yet forgettable, it had good production values and after effects, harlequin figures, swirling backgrounds, but it was there to sell a few downloads.

‘Who Are You’ was a 2010 film by Michele Fiascaris made when he was a student at the London Film Academy. (I previously reviewed London Film Academy’s 2013 output.) It was your classic story of a reflection that exists independently on its subject and, as my fellow juror Miriam put, a slightly wiser version. It was visually accomplished and entertaining, no more or less than other features in the ‘Double’ genre (ENEMY, THE DOUBLE).

Finally, Paolo Sedazzari’s ‘Donkey Planet’ not to be confused with ‘Animal Planet or ‘Donkey Kong’ the video game. This is about a disillusioned employee from ‘Party Animals’ who decides to quit his job to save asses. His bête noire is overweight kids who crush the poor creatures (Eeyore, eeyore, no, he told them!) The hero demands a £100,000 redundancy package which his employer naturally refuses; cue some vigilante action and a run in with the police. Some of the bleached out photography let it down but it gave the audience a much needed laugh.

How do you pick winners from that lot? Through compromise!

‘Who Are You’ got an honourable mention.

In third place: ‘Top Hat’ because it executed its narrative coherently.

In second place: ‘Regeneration’, for its arresting visuals and consistent style.

But the winner, by two judges to one was... ‘Manufactured Britishness.’

I know, I felt like Louis Walsh out-voted by Simon Cowell and Cheryl Cole.

Kristina Cranfeld will be invited to judge shorts at the next Shorts on Tap event on 6 May. The audience had a good time.