Ex and Current GF jump into river to see who Boyfriend will save.. Click this To Read More... 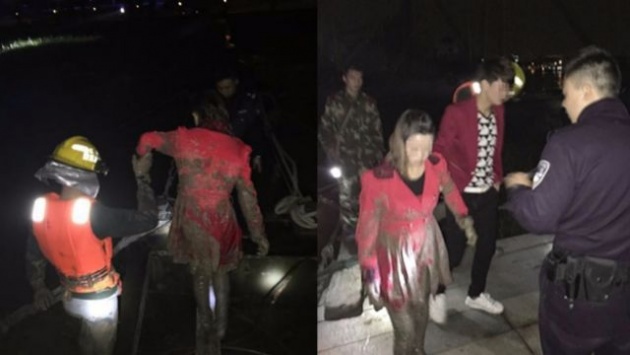 Your ex and current girlfriend are sinking in a nasty mudding pool, who will you save?

This is the unlikely situation the 20-year old Chinese male in Ningbo, Zheijang has experienced after her former and new girlfriend drawn into the dirty mire to test his love.

It was still raining when Xiao Wu’s former girlfriend made a commotion early morning by rushing into sweat ground expecting that she might be saved by her ex-boyfriend.

The two ladies were in a serious talking mode and suddenly fighting about their feelings towards the guy of their dreams. The ex immediately jumped into the dirty mud. Feeling jealous overload, wanting not to miss out the new girlfried threw herself into the river, watching the boyfriend to choose from them.

What did the boyfriend do next? Wu jumped into the river, saved her girlfriend, and left her ex sinking below.

The girlfriend jumped into scrap part of transport ship, landed on the boat. She had a little foot injury, while the ex-girlfriend was trapped in the muddy river.

Realizing the biggest turning point of her life, she knew he won’t save her at all. She took her phone and ask for a friend’s help.

Few minutes half past three in the morning, a group of police and firefighters arrived and helped the girl who was submerged up to her chest.

The arguments continued after the ex-girlfriend went back to the riverside.

“We have been broken up for four months, why are you still harassing me?” Wu asked his ex,

“I’m going to leave you alone.” Replied the ex-girlfriend with a straight face.

I am guy honest and find girlfriend and you?

What Makes you Sexiest If you're an Adult Girl?

Hello, I'm Ashley dewey from United States of America. I've something to share about the top trendin…

How to Get a Girl's Attention