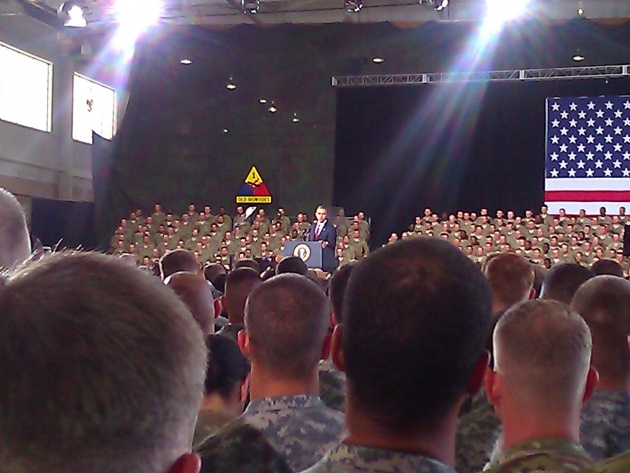 In a speech at Fort Bliss on Friday, President Barack Obama announced a newly-signed executive order, which addressed access to mental health care of veterans, service members, and their families.  In addition to calling for increased research into the causes, nature, and treatment of PTSD, the order called on the Department of Veterans Affairs (VA) to:

Expanding the VA's staff sounds like the solution to delayed treatment and long wait times, but in a country facing a national shortage of mental health care providers, the VA has struggled to attract professionals.  President Obama's executive order referred to incentives such as scholarships and student loan repayment programs, but these positions are still unlikely to be filled quickly.

In an effort to address the shortage of mental health professionals, the VA announced the formation of a 21-person recruiting team in June, as well as a plan to develop collaboration with community-based providers to compensate for staffing shortfalls and encourage sharing resources with rural communities to help serve areas where demand might otherwise not be enough to support a full-time mental health care provider.  Friday's executive order re-stated this goal, presumably lending Presidential support to the VA's initiative.

The August 31 executive order and the VA initiatives it reinforces address genuine issues with veterans' access to mental health care.  Only about half of veterans who need help actually get it, either due to problems of access or reluctance to seek care, according to Dr. Charles Hoge, former director of a psychological research program, focused on the mental effects of war, at Walter Reed Army Institute of Research.  Veterans in crisis commonly have to wait months for even initial mental health treatment, and too many do not survive the wait - at a rate of roughly one a day, according to a DoD figure released in June.

Military veterans are a resourceful group of people, however, and to take up the slack, many veterans and family members are turning to social media for advice, information, support, and understanding.  On social networking sites like Facebook, Twitter, and the Community of Veterans, veterans find an opportunity to connect, share experiences, and exchange useful information about available resources.

That sharing is an important part of self-care for PTSD and other mental health issues like depression.  Peer-to-peer counseling has proven very effective in treating PTSD, especially among veterans, but many veterans find it difficult to talk about wartime experiences and symptoms of stress or depression.  The online environment of social network may make opening up easier for many users.

Veterans use social media to seek and provide support for a range of issues, not just PTSD.  Administrators on the Wounded Warrior Project's Facebook page and the Iraq and Afghanistan Veterans of America's Community of Veterans say that users post about issues including depression, thoughts of suicide, relationship struggles, injuries, disability claims, unemployment, and financial difficulties.

These social media posts often serve as an alternate route to help for veterans in need.  Although it is rare for a post to directly ask for help, administrators on pages like the Community of Veterans and the Wounded Warrior Project keep a careful eye out for posts indicating a crisis, and they quickly reach out to veterans with a friendly note, advice, and referrals to resources like counseling.  This gives veterans in crisis an instant response rather than the months-long wait they might face at the VA.

As an alternative route to care, social networks make a significant impact.  In 2011, the Wounded Warrior Project referred twenty to thirty veterans a week to mental health care providers, and those numbers increased to between seventy-five and a hundred referrals in the wake of posts addressing specific issues.  At the time, the page had about 450,000 likes; today, that number is closer to 960,000, and referrals have likely increased in proportion.

Social networking is no substitute for readily available care through the VA.  Toward that end, President Obama's executive order may offer some hope, but since the order is "subject to the availability of appropriations," actual change may depend on Congress in a season prone to budget-slashing.  In the meantime, America's veterans will continue to support each other, on the homefront as on the battlefield.

A year ago, President Obama visited Fort Bliss to discuss the end of combat operations in Iraq; Friday's speech was a nod to that anniversary.  A video of the 2010 speech is below.