If one wants to see film posters up close and personal in a setting outside a cinema, you are usually on the London Underground waiting for a Northern line train that is blooming delayed. The good people of the Film Distributors Association have simulated the underground in an art gallery (Getty Images, 46 Eastcastle Street, London W1) together with heat, crowds and - wait a minute - glasses of wine. I have to concede that this is a very agreeable platform on which one can view posters for THIS IS THE END, RENOIR, THE CONJURING, KICK ASS 2, AFTER EARTH, SUMMER IN FEBRUARY, 300 RISE OF AN EMPIRE, THE WOLVERINE, BEFORE MIDNIGHT, 1D – THIS IS US, ELYSIUM (the back of Matt Damon) and many others.

The intention is to increase awareness of movies on a communal way. We can all see posters and photographs on the internet, but the exhibition attempts to make us look at posters as objets d’art. Certain posters do indeed suggest art, such as the evocative art for THE WOLVERINE and IN FEAR (machetes as a picket fence). Others foreground the actors in a traditional way.

You can check out the exhibit at www.stateoftheartcinema.com. I think they could have done more, for example including more tie in merchandise and a constantly running trailer reel with headphones (in practice this requires service). They have some of this, but not enough in my view. Also, they could have featured an anatomy of a film poster: how a design evolved (something for the kiddies). So, room for improvement.

I cannot argue with the company. I met THE GREAT BRITISH BAKE OFF host, Sue Perkins (pictured), who spoke at the exhibit and admitted she was a keen collector of film posters - Saul Bass designs and Polish film posters make up her modest collection, reduced now to around 40. ‘This is the biggest crowd I have had to address where I haven’t had to announce ‘bake’’, she explained, before regaling us with anecdotes of growing up in Croydon (not so much a town as a bypass). I met two representatives of THE FILM COOPERATIVE, who worked on raising advertising revenue ‘putting film ads where other ad networks don’t reach’, one of whom was an avid knitter.

The exhibition moves to the following venues: 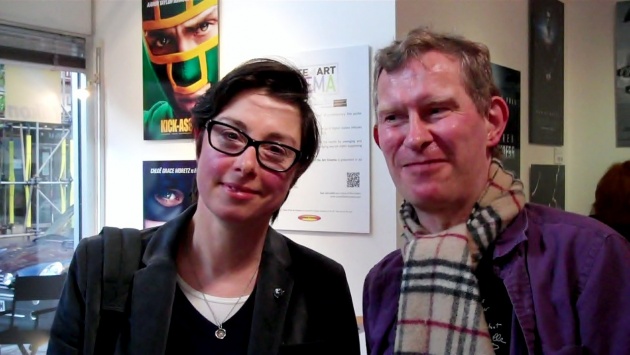