Facts You Need To Know About Olive Oil

Looks like there are a couple of new things you’d learn about when you try and spend some time doing survey chat. Hmm…

So, here I was, trying to kill some time off Bitlanders. I have basically no interest to kill time since I have to be at least doing another blog to submit supposed to be yesterday, as of right now. But yeah, I am already a day late and I think I would need another day to finish this one off. Although I am hoping I can get this one done before this night ends.

Anyway, off to what I was saying about killing time. I was killing time and decided to go over survey chat. There are three options available: with Hillary, with Micky or with Bitlanders. I tried browsing all three but the one that really caught my attention was the one with Bitlanders. It was about olive oil. And although, to be very honest, it is probably something I am not totally interest at, still, there was some new knowledge I gathered.

And so this blog was made.

Now, allow me to present to you the things I think you, and all of us, need to know about this wonderful stuff that is olive oil.

WHAT IS AN OLIVE OIL?

I would assume that every single one of us know what olive oil is, or at least heard and has an idea what it is. It is not a shocking thing at all. Olive oil has been a vital part of our foods and our kitchens all our lives. OR at least of those that do not prefer butter, margarine and lard over the healthy olive oil.

Yes, you read that right. Olive oil is healthy. Although, I’d love to be safe and not proclaim here that the other options provided above were unhealthy. That would be up for another write-up and another discussion. Let’s focus on olive oil.

As a standard, let me begin this informative discussion by stating what olive oil is and other necessary details that must be provided to complement this information.

Olive oil is an oil (or fat, to be more precise) obtained from pressing whole olives, a traditional tree crop originating from the Mediterranean regions. It has a wide variety of uses, from medicinal and pharmaceuticals to cosmetics and beauty, which will be discussed later on. Although, it is most known for its common use in cooking.

HOW OLIVE OIL IS PRESSED

One of the most essential part of survey chatting with Bitlanders included him asking me if I know how olives are pressed into olive oil and providing information regarding how the olive oil is made.

He gave me a particular website dedicated to olive oil - www.oojshop.com or the Organic Olive Juice Company. At first I thought it was just a simple online shop that probably sells kitchen stuff. However, it turns out to be a really very cool website that, while it mainly does sell olive oil, it also has a lot of informative materials inside it that are really worth everyone’s read, most especially those who are fond of food and cooking.

image source: photo is mine (screenshot)

According to the website, olive oil is all about acidity and taste. There are two types of olive oil, one is Extra Virgin and the other is Virgin. Their primary difference lies on the amount of free fatty acids the oil contains. They also have different taste, with Extra Virgin having fruity, bitter and pungent attributes. For further reading, please visit the website highlighted above, or click here.

Now, let us proceed to the process of how olive oil is made, that is by “pressing”. Pretty much, the list involved their own way of making olive oil but it looked like it could be the same for all olive oil making processes. There are only five steps involved in this process which are, in my perspective, very easy to understand and picture in mind. Here they are, in particular order: (Please refer to the image on the right, or visit their website for more detailed information.) 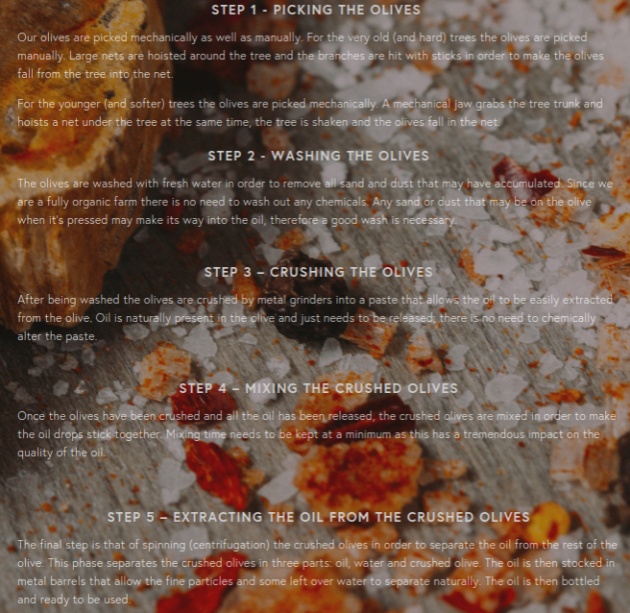 5. Extracting the Oil from the Crushed Olives

image source: photo is mine (screenshot)

THE HEALTH BENEFITS OF OLIVE OIL

I have stated earlier in this blog that olive oil is healthy. Now, I have gathered certain proofs that can support this statement.

The health benefits of olive oil are unrivaled, and research reveals more benefits nearly every day. In fact, we are only just beginning to understand the countless ways olive oil can improve our health, and our lives. Olive oil is the cornerstone of the Mediterranean diet — an essential nutritional mainstay for the world’s longest-living cultures.

Olive oil, through many conducted researches, had been proven to be effective against a bunch of killer diseases. Let us look at them one-by-one.

According to a health article published by Isabel Putinja in February 18, 2015, there was a recent study conducted that proved a certain ingredient in Extra Virgin Olive Oil (EVOO) can kill cancer cells. The said ingredient is called oleocanthal. It is said that oleocanthal “causes a rupture of a part of the cancerous cell which releases enzymes and causes cell death, without harming healthy cells. In this way, cancer cells are killed by their own enzymes.”

According to a health article published by Elena Paravantes in 2011, olive oil diet reduces risk of Type II diabetes. The article, published in Olive Oil Times states that a “Spanish study published in the scientific journal Diabetes Care showed that a Mediterranean style diet rich in olive oil reduces the risk of type II diabetes by almost 50 percent compared to a low fat diet. Type II diabetes is the most common and preventable form of diabetes.”

Another health article published by Elena Paravantes in 2011 states that consuming plenty of olive oil might help prevent strokes according to a research study from France. It reveals that older people who consume more olive oil in their diet may be able to help prevent themselves from occurrences of stroke. The study was part of the Three-City Study, an ongoing multicenter study of vascular risk factors for dementia. It was published in the online issue of Neurology, the medical journal of the American Academy of Neurology.

Nevertheless, the published health article emphasizes that though this research findings are true, it is still not recommended to utilize olive oil as main source of fats in the diet: “in terms of general health it is recommended that unsaturated fat including monounsaturated fats found in olive oil, should replace saturated fats in the diet as this has many health benefits such as reduction of risk of heart disease as well as improvements of blood sugar levels.”

Meanwhile, a health article published by Tom Baker, also in 2011, stated that yet another research study revealed that olive oil might play a vital role in potential treatments for osteoporosis.

Would you believe that olive oil can also help protect its consumers from possible mental illnesses? Elena Paravantes also published in 2011 another health article about a certain Spanish research study from the University of Navarra and Las Palmas de Gran Canaria that proved consumption rate of dietary olive oil may be associated with lower occurrence of depression.

This is not the first time a research study revealed such results since in 2009, a similar study was also conducted and also revealed the same results of lower rates of depression among eaters of Mediterranean diet rich in olive oil, vegetables, beans and fruits.

A large research study confirmed that the Mediterranean diet, which includes olive oil as main ingredient, prevents the occurrence of metabolic syndrome in humans. This is according to the health article also published by Elena Paravantes in 2011. However, in order to see better results, consumption of Mediterranean diet should be complemented with exercise and other healthy habits such as non-smoking.

Metabolic Syndrome is a cluster of health conditions that occur together increasing the risk of heart disease, stroke and diabetes.

According to another health article published by Elena Paravantes in 2013, polyphenols found in Extra Virgin olive oil may help prevent or delay the occurrence of Alzheimer’s disease in old individuals.

OTHER NON-HEALTH BENEFITS OF OLIVE OIL

Aside from these already amazing and wonderful health benefits of olive oil, there are also a bunch of other extraordinary non-health benefits that can be derived from this oil. Let’s take a look at this list.

1. Olive oil can be used as hair conditioner

Pretty much as how your common coconut oil can treat your damaged and dry hair, olive oil can also do the wonders. According to Reader’s Digest, just heat (not boil) a half cup of olive oil, apply it onto hair, then cover it with plastic shower cap or towel. Leave it on for 45 minutes before shampooing and rinsing it.

2. Olive oil can be used to clear up acne

Another one from Reader’s Digest and I quote: “Make a paste by mixing 4 tablespoons salt with 3 tablespoons olive oil. Pour the mixture onto your hands and fingers and work it around your face. Leave it on for a minute or two, then rinse it off with warm, soapy water. Apply daily for one week, then cut back to two or three times weekly. You should see a noticeable improvement in your condition.”

3. Olive oil can be a substitute to shaving cream

This is yet another from Reader’s Digest which states that olive oil can be a better substitute to shaving cream rather than using the commonly used lathered soap. One, soap might do the trick but it can be harsh to skin. Two, olive oil, which can also pretty much do the trick, can do wonders of moisturizing the skin.

I swear the next time I am heading off to the market I’ll be buying extra olive oil for shaving.

And that is it for this blog about OLIVE OIL!!! I invite everyone to take a glimpse at this topic too and if you may, you can definitely write about this too. 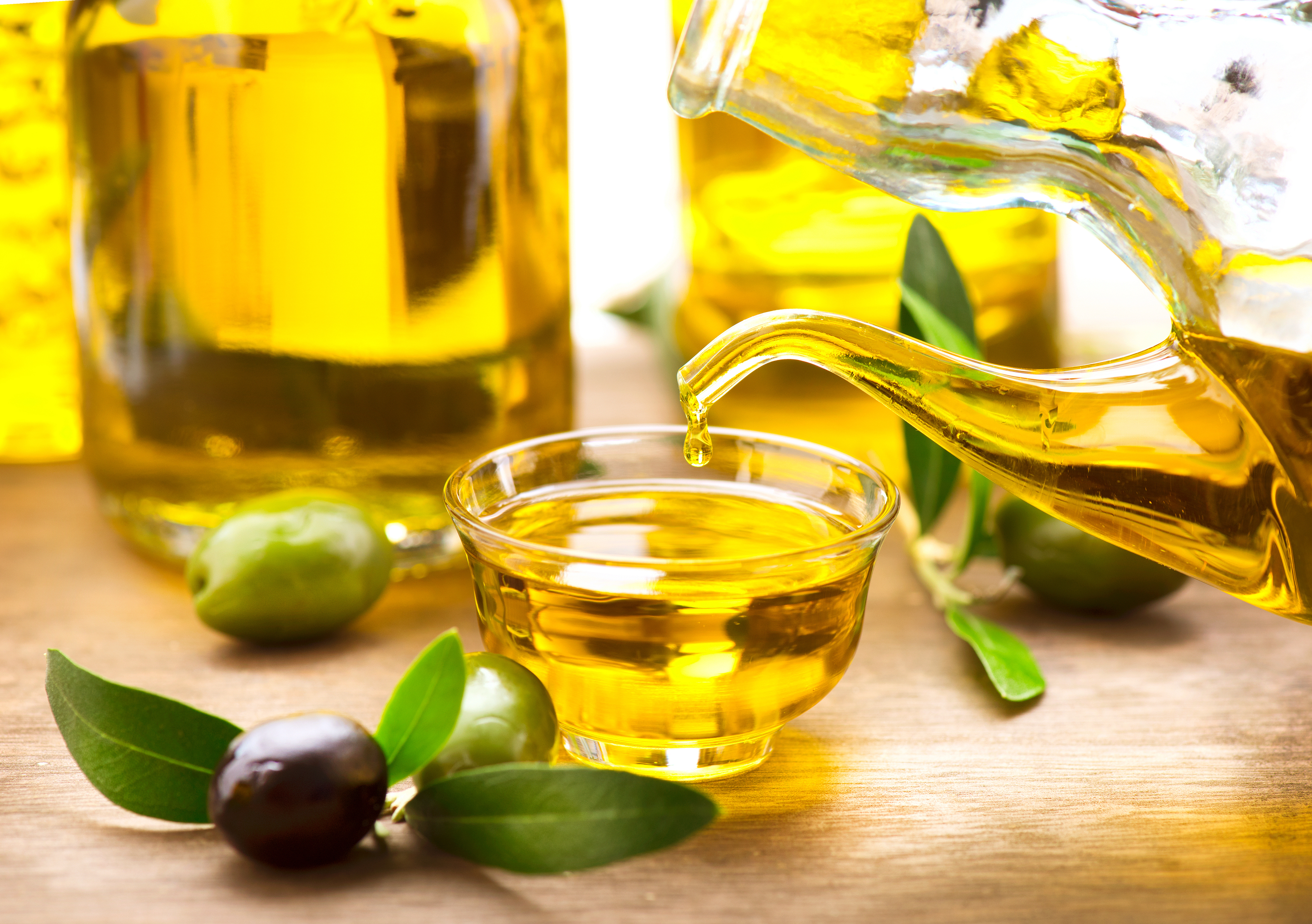 image source: Today I Found Out

This article is an original. Do not copy. All images and videos are either owned or with proper credits. Thank you.

I bet youve never heard of the term oil cleansing. Or if you did then you havent tried it yet but al…

3 typical spanish dishes you should try once in life Spain has an extensive, varied cuisine and abov…