Luis Enrique's team have scored 124 goals, with just 27 conceded so far this season. 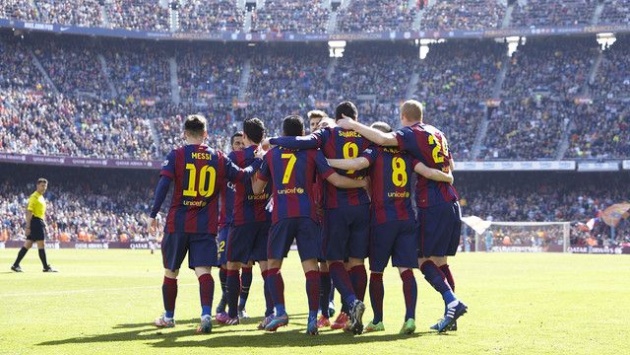 Barça’s current sweet moment of form sees them Cup finalists, atop the Spanish League and with a 1-2 lead going into the second leg of their Champions League last 16 tie against Manchester City. Key to their success so far has been their impressive goal scoring record – 124 goals – and their solid defence, which has conceded just 27 in the 41 games played  - an average of more than 3 goals a game and a goal difference of 97.

Of the 124 goals scored so far, Barça’s front three of Messi, Neymar and Suárez have accounted for nearly two thirds, with 80 in all. Messi has passed the 40 goal mark for the sixth successive season and is currently on 41, whilst Neymar has 26 and Suárez 13.

That attacking trio are the clearly the most dangerous in Europe right now, with no other side coming close to their scoring figures. Real Madrid are second behind Barça in the goal scoring table with 115, 72 of them from the front three of Cristiano Ronaldo, Bale and Benzema. Bayern Munich (98) and Chelsea (93)  come next with Robben, Lewandowski and Müller accounting for 51 of Pep Guardiola’s side’s goals and Diego Costa, Hazard and Oscar bagging 39 for the London team. Italian league leaders Juventus are back in fifth with 71, with Tévez, Morata and Llorente scoring 37 goals between them.

Impressive stats that illuminate Luis Enrique’s team’s strengths at both ends of the pitch!