Ter Stegen declared fit and included in list for the away game in Valencia on Saturday.

FC Barcelona trained on Friday morning ahead of Saturday’s game away to Valencia (8.30pm CET), where they’ll be defending their lead of four points over Atlético Madrid and six over Real Madrid after scoring an incredible twenty goals in their last four games.

At the usual venue of the Tito Vilanova Field at the Ciutat Esportiva Joan Gamper, and in sunny but chilly weather, Luis Enrique was able to train with all of the available first team members, as well as Barça B’s Sergi Samperand Paik of the U19 team.

After the session was over, Luis Enrique announced his squad of eighteen that will be making the trip to Mestalla. There was good news regarding Ter Stegen, who has been declared fully recovered from his knee issues, and the German stopper is included in the list along with Bravo, Piqué, Rakitic, Sergio, Dani Alves, Iniesta, Suárez, Messi, Neymar Jr, Mascherano, Bartra, Munir, Jordi Alba, Sandro, Adriano, Vermaelenand Samper. There is no place for goalkeeper Jordi Masip, or for the injured Mathieu, Sergi Roberto, Douglas and Rafinha.

There were plenty of jolly japes at today’s workout, and the warm-up involved a popular exercise in which players that missed passes are ‘punished’ by their team-mates. It was Munir who got the treatment today – click on the picture to see what happened to the poor chap! 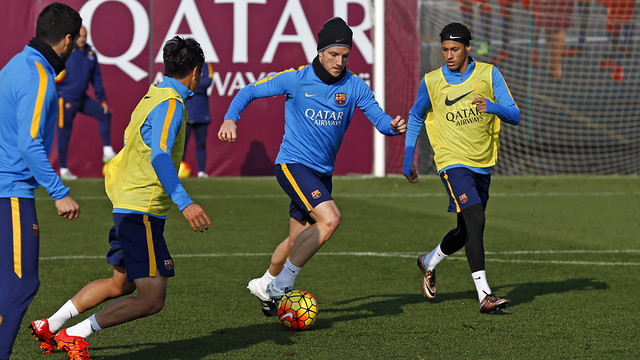