Fight Club. A mini Deconstruction of the plot 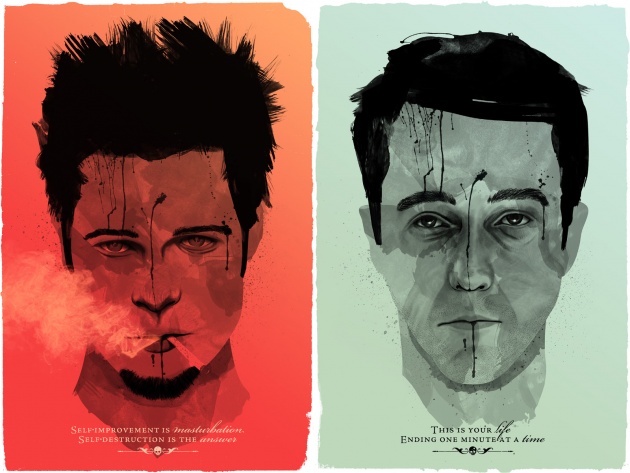 Now personally, Fight Club was something so much more then just a "cool movie". Originally, the story was a captivating book which was then turned into a Full length film. If you haven't seen Fight Club for any odd reason then stop reading and spend the time to watch it, especially since Empire magazine rated it 10th greatest movie of all time in the 500 greatest movies of all time. Spoilers alert!

Ok, so Fight Club does not barrage the audience with CGI and large battles, no, but this is why i like it so much. The Film really puts you in the deep end as a member of the audience. We start off not knowing exactly what is happening and there are many scenes that confuse the viewer to a point were they are begging for an answer. The plot twist in Fight Club is one that is impossible to expect because of how well hidden it is from the audience. The two protagonists are actually both the same person but separated by a mental sickness for freedom. Tyler Durden, the alter ego of The Narrator who suffers from insomnia, is basically what the narrator wishes he could do, the man he wishes he could be. The Narrator is at first a very quiet reserved and deflated character until he "meets" Tyler Durden on an airplane, from there on out they form an odd cult friendship in which fighting gives them release from daily grinds and day to day stress. So the fight club is established and new members begin to join the new club. At first the audience just see's this as a way for men to get away from the world and its problems. However, Tyler Durden had bigger plans for the group and so he began running missions and operations to take down the very foundations of society. The Narrator who is still confused just goes along with Tyler Durdens plans but however, along the way he begins to question the methods when one of his men is shot by a police men. Getting back in touch with his morality he attempts to stop Tyler Durden but Tyler has already left without a trace. Thus begins the wild goose chase of the narrator tracking down Tyler but he always seems to be one step behind. Wherever The Narrator goes, Tyler has already formed a Fight club in a new city. We get a hint of the upcoming plot twist when the fight clubs acknowledge The Narrator as their leader. The Narrator then calls his love interest even though she had been having intercourse with Tyler, he asks her what his name is and she confirms that his name is Tyler Durden.

I found this scene so powerful because it explains why The Narrator has been having trouble contacting and reaching Tyler because The Narrator himself is Tyler Durden. When he try's to fall asleep he goes into a sort of trance like state where he becomes Tyler Durden, an alter personality that has surfaced after years of repression and the absence of meaning. Material possession is useless to Tyler Durden and so he begins looking at the bigger picture, however, he does this subconsciously.

The film ends with The Narrator defeating Tyler Durden, his other persona. This makes us think about meaning and what is life and where will it take us. Should we be in touch with our morals or should we sacarafice everything for one objective. I found this film really interesting because it first shows us that material possession and a normal life is meaningless up until near the end where The Narrator begins to question the extremist methods of Tyler.

Personally I believe that Fight Club is a movie that has themes based around release, freedom and the fight against order. Why do we follow rules? What does it mean in the grander scheme of things. A lion does not think about the consequences of killing a zebra, it just has to survive. So has the human race become so advanced that we must follow rules set by a higher power such as the government? Or even God? Questions that cannot be explained but its really interesting to think about it. I recommend fight club to everyone who gets the chance to watch it.

My name is Daniel Barwell, I am currently studying Film Production at Staffordshire University in the UK. Having lived in Hong Kong all my life prior to coming to England to study made me realise the vibrancy and character of asian culture. I have a large passion for film and…