Film Annex and the Future of Online Video 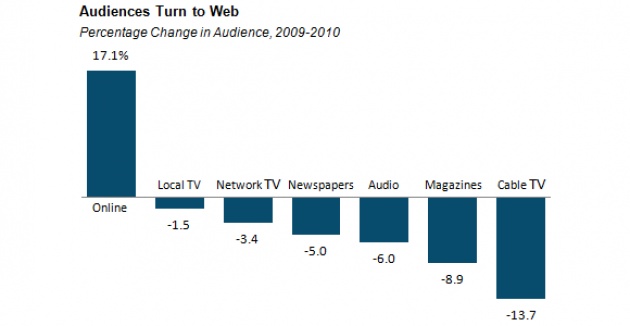 Toss out the TVs and grab your tablet - online video is rapidly becoming the de rigeur for media consumption. Although just a decade ago, television’s stranglehold on video content was all-but-complete, today, more and more consumers are going online for news and entertainment.

According to a recent article, 100 million Americans watch online video every day, a rise of 43% over 2011’s numbers. The 43.5 billion videos watched each month by Americans range from news shows to independent content released by filmmakers on platforms such as Film Annex. Computers may not have entirely replaced televisions, but they’re certainly trying to.

Unfortunately for television, the coveted “youth” demographic seems to be abandoning the old-fashioned platform the fastest as they flock to computers and mobile devices. According to the article,

“Case in point: numbers out of Viacom, the parent company for MTV, Comedy Central, and Nickelodeon, last October. A month after the fall 2012 TV schedule started, viewership had already dropped significantly, with MTV losing 32 percent and Comedy Central 19 percent of viewership. This is alarming for TV execs because television hasn’t been able to hold younger people’s loyalty like it has with older viewers. Likewise, network TV is also suffering the same kind of drop off with ABC, FOX, and CBS reporting declines between 19 and 25 percent (NBC is the only one to report an increase). Generally, some tapering off is expected, but the drops are noteworthy because it means that the current offerings, whether new or renewed series, are just not capturing audience attention like they have in the past.”

As the article points out, part of the problem could be that independent producers are so much more prolific online. The article says, “[E]ach industry learned that once they let content outside of the walled garden, some of it just couldn’t compete with independently-produced works.” The Internet has given a venue to incredibly talented filmmakers from around the globe. Today’s content is less about what TV producers think the most people will watch, and more about each person finding shows and movies from filmmakers that resonate with them.