Last week, we introduced Film Annex's new design, thanks to our website team in New York and Florence: Creative Director Eren Gulfidan, Designer Cara Martin, and Head Programmer Lorenzo Meriggi. The website got a complete new look with a softer color scheme, bigger thumbnails, and a more sophisticated menu, which makes it easier to navigate. Eren's Picks highlights one featured filmmaker and sponsored Web TV, while the full list is accessible here. The Annex Press also got a facelift and shows a more comprehensive list of blogs from our editors and writers. Use the comments box below to tell us what you think or join the conversation on Twitter with the #FilmAnnex hashtag! 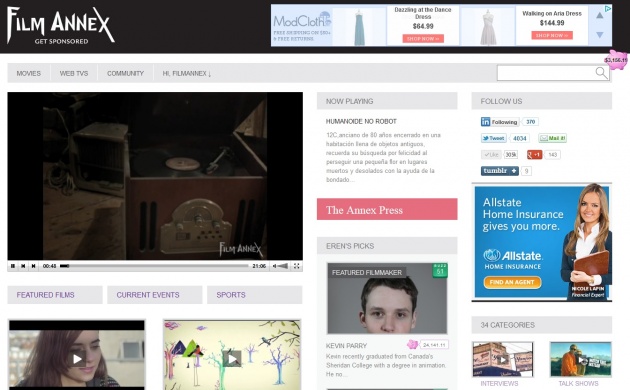 This week, two filmmakers joined Eren's Picks, our list of ever-growing featured filmmakers! The first is Tess Martin, a Seattle-based animator who uses ink, paint, sand, back-lit paper cut-outs, and random objects to create her animations. Among her body of work, The Whale Story is the most atypical, as it was shot on a 16-foot high wall in Seattle's Cal Anderson Park. The experimental animation tells the story of a dreamlike connection between a fisherman and a whale trapped in a net. The film combines a live actor with animated segments, all smoothly interacting with each other as the sea and the whale come to life on the wall. Tess is currently working on an animation made with ink and water and regularly blogs about her creation process, a great way to share new animation techniques with her fellow filmmakers.

We also welcomed Sam Spreckley to our featured list, a Scottish filmmaker, visual artist and sound designer. His work has been shown in exhibitions in the UK and internationally in festivals and group shows. His films are real experiments where he explores the connection between sound and image. In Surface II, it's like you are in an ideal biology class, where all types of experiments are permitted and possibilities are endless. By using natural elements and electronic sounds, Spreckley creates an alternative dimension where you can't really tell what is real and what isn't. Follow his blogs to know more about how he found filmmaking and where he gets his inspiration.