Film Review: A MILLION WAYS TO DIE IN THE WEST – not a million laughs, but more than enough! 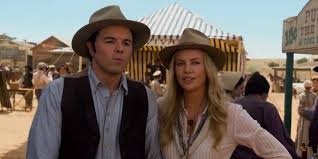 It seems almost a self-fulfilling prophecy that a comedy set in the gold-rush fuelled Old West should attract panning, but A MILLION WAYS TO DIE IN THE WEST, co-written, co-produced, directed and starring Seth MacFarlane isn’t the laugh-free self-plucked turkey that some commentators have suggested. In time, it will be recognised as the most misunderstood second feature from an emerging directorial talent as Orson Welles’ THE MAGNIFICENT AMBERSONS, or perhaps Steven Soderbergh’s KAFKA. The difference - with Welles at least - is MacFarlane saw his film through to completion without any compromise to his vision. Oh, and it’s funnier. (Sorry, Mr Soderbergh!)

Now MacFarlane’s humour – knowing nerdish asides, pop culture references, cuss words that guarantee no clip can be shown on TV un-edited, violent black comedy, bad taste humour (‘one of my sheep ran into a whorehouse; incredibly it came back with $20’) and full-on diahorrea jokes – is not to everyone’s taste. However, MacFarlane has built up a sizeable audience from his twice-cancelled animated TV series FAMILY GUY and the spin-off THE CLEVELAND SHOW, not to mention his first movie, TED. He has found his niche, and doesn’t depart from it.

The best way to prepare for A MILLION WAYS – and to compare it with TED - is to think of both films in terms of FAMILY GUY characters voiced by MacFarlane himself. If TED was a ‘Peter Griffin’ movie, more hormonal but just as irresponsible, then A MILLION WAYS is a ‘Brian’ movie, careful, skittish, intelligent but ineffectual. Brian loses girlfriends, just as sheep farmer Albert Stark (MacFarlane) does here, specifically Louise (Amanda Seyfried) who wants someone braver, competent and materialistic. She hooks up with Foy (Neil Patrick Harris) owner of the local moustacherie, who shoots better, can buy her dresses and shares her self-absorption. However, Albert gets an unexpected helper in Anna (Charlize Theron), the wife of a feared outlaw Leatherwood (Liam Neeson). She teaches him how to use a gun and find his inner confidence, notably when he rashly challenges Foy to a gun fight.

Just as car chases shown out of context can seem less thrilling when presented as clips, so jokes can seem less funny when we haven’t adjusted to the rhythm of the humour; it is no wonder that A MILLION WAYS, which is under-performing at the box-office, didn’t seem attractive to potential moviegoers. MacFarlane doesn’t do gags every thirty-seconds, but the film has a decent laugh rate, if no big whoppers; some of them quite clever. MacFarlane refers to the way in which people pose for photographs in the Old West, which leads to an unexpectedly sweet moment, and the way in which ice is delivered – and the peril therein. The only plot strand that doesn’t work involves Albert’s buddy, Edward (Giovanni Ribisi) being desperate to sleep with his adoring prostitute girlfriend, Ruth (Sarah Silverman); being Catholic she wants to wait until they are married, even though she sleeps with up to fifteen guys per night; he sees her job as a means to an end (‘well, I can get that [named item]’). Seth, it just isn’t funny, though it is natural that Albert would have a best friend more pathetic than he is, and there is a good fist fight joke involving MacFarlane and Ribisi.

MacFarlane stages many of the scenes that you would associate with the Western: gun fights, an extremely violent bar room brawl, the county fair, a barn dance, featuring Harris showing his Broadway credentials, a horse chase towards a speeding train and an encounter with Native Americans, in which ‘Mila Kunis’ is introduced to their language. (You know that from the trailer.) There is a contrast in the way Albert describes the West, perilous and full of ways to kill someone, and the photogenic good looks of the principal cast. (Why aren’t they pock-marked from diseases survived in childhood, have facial hair to cover wounds, and appear weather beaten by harsh winters?) Best to overlook that and why Anna doesn’t have children and give yourself up to the gentle chuckles, unexpected cameos and two (count ‘em) pop culture references, both featuring actor reprising iconic roles (well, Sam Jones did it in TED), one more blatant than the other.

I actually enjoyed A MILLION WAYS TO DIE IN THE WEST more than TED. It doesn’t have the gimmick (foul-mouthed talking teddy bear) of that movie – MacFarlane bravely departs from voicing a non-human character – but it is less sexist. The women in the movie come out well – they are the stronger characters. Theron plays it straight and makes Anna a rounded character; you can believe that she would turn Albert into a pet project. MacFarlane doesn’t always give instant payoffs – if you go for popcorn early one you might not understand the significance of Albert being pecked in the face by a bird when treated by a doctor. They generally arrive, notably to the ‘runaway slave’ fairground game. The film is perhaps at its best – cruel and funny - when Albert recalls his childhood, but you won’t get any spoilers from me. Catch A MILLION WAYS TO DIE IN THE WEST in cinemas while you still can and you might find yourself surprised how entertaining it really is.

Reviewed at Cineworld Wood Green, Screen 12 – they really should replace the damaged screen – 17:30 screening, Sunday 15 June 2014 (Father’s Day in the UK; the lad took me)