Film Review: BEFORE I GO TO SLEEP: Kidman forgets herself, no spoiler 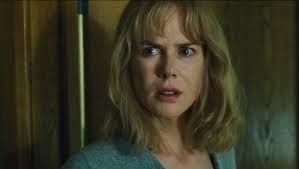 It’s not much of a thriller, but BEFORE I GO TO SLEEP, adapted from S J Watson’s best-selling novel (and much beloved of women) by director Rowan Joffe, keeps you guessing until the end. Why is Dr Nasch (Mark Strong) so interested in Christine (Nicole Kidman)? Can you really get a camera to record your own video diary on the NHS? Could that nice Mr Darcy lookalike, Ben (Colin Firth) really be nasty? How do you get a scar from a skiing accident? (Maybe grazing yourself with the lid of a Ski yoghurt, perhaps.) Who is Claire (Anne-Marie Duff), and why is Christine not allowed to see her?

I will answer none of these questions except to say this. Christine has a rare sort of brain disorder that makes her unable to form new memories. Except that is not strictly true. Every time she goes to sleep, she wakes up having no idea what she did the day before, or the day before that. She was involved in an accident resulting in head trauma. Her husband reminds her of her wedding day and their life together. Christine has suppressed memories involving a hotel and an assault.

Normally, you read a book and imagine it as a film. I had the reverse experience. I watched the film and imagined it as first person narration.

‘Awake. Why is this arm around me? Heavy. Heavy with the sleep. I move it, but I mustn’t awaken the man it belongs to. A man? Who is he? I get up. Step forward. A wall. Photographs. The man in bed is in them. I’m in a white dress. I’m married. Married to him? My husband? I turn. He looks at me. Caring? Do I know what caring looks like?’

The author Stephen (S J) Watson gave up a lucrative career in the Health Service to be a novelist – well, he went part-time (as a health professional, not as a writer). He was inspired by the obituaries column in The Economist magazine. I thought that would describe the latest business to go under, but in fact described an old man who, like Christine, couldn’t remember who he was from one day to the next.

BEFORE I GO TO SLEEP keeps your attention but it isn’t exactly ‘edge of your seat’ stuff. It has multiple problems. First, I started to think about Christine’s parents. Why are there no pictures of them? If Christine could form no new memories she must have old ones not related to the incident.

Then I started to think about compensation. If she had an accident, was someone taken to court? I felt I was watching a movie illness, a McGuffin, a high concept that actually makes it difficult for you to care about Christine. She can’t form new meaningful attachments. She will read the same opening chapters of a book. She will not remember voting for a Coalition Government. (Who does?)

Meanwhile there is the enigma of Colin Firth, a man who has gone from Oscar Winner to Mr Ubiquitous. DEVIL’S DUE, ARTHUR AND MIKE, KINGSMAN: THE SECRET SERVICE and MAGIC IN THE MOONLIGHT are evidence that he isn’t too worried about following THE KING’S SPEECH with an Oscar-worthy role.  As for Kidman, taking a role in a thriller seems like a backward step (it’s 25 years since DEAD CALM). Yet it does present an acting challenge. I would have expected Christine to be more declamatory: who are you? What are you doing? Why should I trust you? Each day the same expression of fear and gradual orientation; inevitably she would be a bore. Ben could say what he like at the end of each day and she’d never remember, promising her holidays they would never have. If I was Christine, I would never go to sleep just to test the limits of daily memory. It’s just a contrivance, I would tell myself.