Film Review: BIG HERO 6 – on a scale of one to ten, how enjoyable is this Disney cartoon? 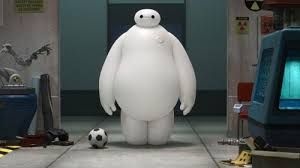 The animated family film Big Hero 6 is a reminder that heroes don’t always have to beat people up to prove their valour – they can be firemen, nurses or sit through Jupiter Ascending without falling asleep, which I’m told is heroic. It is produced by Disney, the company that also purchased the rights to Marvel characters and Star Wars. I understand the sentiment but I can’t imagine too many people would watch a Star Wars picture where, instead of blowing up the Death Star, Luke Skywalker tried to use his Jedi mind powers to convince those on board that working in a space station with that sort of moniker is really a bad thing. ‘Oh we don’t call it the Death Star,’ I imagine he is told, ‘we named it Phil.’

The title Big Hero 6 is explained in the last scene – well, not the very last scene, that involves a cameo from someone with a moustache to rival my own – but we interpret the ‘big hero’ to be Baymax, a white blobby automated healthcare assistant with the voice of Scott Adsit (30 Rock). Two dots for eyes are joined by a line, Baymax has a spongy balloon-like exterior that makes Americans feel better about being overweight; if a guy like that can be a hero, pass me the marshmallows. You may also think of a sumo wrestler without a thong.

Baymax is also a science project created by the main character Hiro’s brother. I should add that young Hiro (Ryan Potter) and his brother, Tadashi (Daniel Henney) brought up by their aunt after their parents died, live in the city of San Fransokyo, a sort of mash up of San Francisco, Tokyo and the city where Futurama is set (New New York). It is a place where a major explosion at a science expo claims two lives and the police don’t investigate. That said, I guessed the identity of the perpetrator pretty quickly, mainly because we are told it is someone else and that so obviously isn’t the case.

The opening where Hiro shows the power of his rag doll, smiley-faced battle ‘bot in illegal robot wars fights (they are only illegal because, I suspect, Craig Charles was not involved) sets the tone for a film that is consistently humorous. It is also not particularly Japanese. Most of the laughs come from Baymax getting a puncture or six or from having to squeeze his bulky frame through tight holes or from losing air when his battery life is low. Oh, and first bumps. Baymax constantly asks ‘on a scale of one to ten, how bad is your pain’ and carries out scans that can detect the early onset of puberty. Strangely, neither puberty nor a failing battery features in the last half of the film; normally these things are set-ups for events that impede the hero in the second or third act. If Hiro is anything like me, puberty will impede him for the next thirty five years.

The villain wears a kabuki mask because the makers have to work in a Japanese reference somehow. Actually, Japanese names like Kikuchi appear on buildings to remind us that America really is foreign owned; if those countries called in their debt, who knows what would happen? Maybe America would have to default... He uses microbots from Hiro’s design that can be controlled telepathically to create a tidal wave of deadly intent. Microbots can also form solid platforms, become a handy stairwell and form a big pointy stick to operate the channel changer.

Hiro and Baymax are not alone in their struggle against the kabuki villain. Hiro’s brother’s four friends, all given ridiculous nicknames, lend a hand. ‘When you have a problem, friends are good to have around,’ says Baymax, who would also remind Hiro of the importance of taping Heroes Resurrection when it airs later this year.

Hiro learns that revenge is not always the best strategy, especially when large matter transporters lifted wholesale from Stargate are involved. It is, as you would expect, fairly wholesome. Big Hero 6 doesn’t have the wit and subversion of the best of Dreamworks Animation. Nor does it have the emotional power of the best of Disney-Pixar. I’d give it more than six out of ten, not for the level of pain I endured from the kid behind me kicking my seat, but for laughs, warmth and slick, pacy storytelling.

Reviewed at Odeon Marble Arch, Screen 2, where the staff really ought to show the public to their seats given the ‘reserved seating’ (the scourge of the British movie-going experience). 13:40 screening, Sunday 8 February 2014, two seats for £11.00, but a student ticket for £11.20, what is with that?