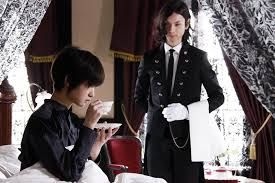 It’s not every day you see a Japanese film playing at your local multiplex, but BLACK BUTLER, released in the United Kingdom by Warner Bros and produced by their Japanese division, is not your typical Japanese film. It is the big screen adaptation of Yaha Toboso’s manga novel about a young woman, Genpo Shiori (Ayame Gôriki) who dresses as a boy and her loyal manservant, Sebastian (Hiro Mizushima). In the opening minutes, we learn that Sebastian can survive a bullet in the head. He defends himself and his master using nothing more than a butter knife (giving new meaning to the expression ‘spread ‘em’). Sebastian, the Kuroshitsuji of the title (that’s Black Butler in literal translation) is a fallen angel devoted to the protection of those who sell his soul to him. At some point, he will collect, but the soul has to be surrendered under certain conditions.

The film, directed by Kentarô Ohtani and Kei’ichi Sato, is set in a land that resembles Victorian England but with far better weather. Shiori lives in a huge country home, with a clumsy bespectacled maid, and is, as far as I could work out, the watchdog of the west. The west and east are apparently at war; interestingly for a Japanese film, the ‘imperialist’ West appears to be heroic. At the start, people are dying through spontaneous mummification (or somewhat derivative special effects). The tarot card held by a victim gives this threat a name: the Black Death. Shiori, accompanied by Sebastian, investigates it cause. Her search brings her face to face with necrosis, a golden capsule that reminded me of aromatic bath salts.

The film’s unique selling point is its unlikely hero, who looks like a Japanese Michael Jackson impersonator, who is inordinately faithful but actually holds power over Shiori. I kept expecting him to burst into dance – the action choreography is the nearest substitute. The other point of interest is the flashback structure. When characters appear to disobey orders or turn up in unexpected places, we get a flashback to show how they got there. There are also flashbacks to a particular act of violence.

Why is Shiori dressed as a boy? Her parents were killed when she was very young (shades of BATMAN). There is an element of her not appearing to be the heir of a big important company, but I could not quite work it out and stopped trying after thirty minutes.

After a moderately graphic opening, the early scenes are soporific. However, it picks up when Shiori goes to a party with her clumsy maid in a frilly skirt as an escort. The other influence is VICTOR VICTORIA, though at no point does Shiori sing ‘it’s jazz hot, baby’ which is a real shame, because I kept expecting it to go full musical. Instead, we are thrown into a world where girls are kidnapped as test subjects, rich people participate in drugs parties that in the end kill them as they fight over the antidote for necrosis, a public exorcism takes place conducted by an American preacher, and Shiori discovering some unpleasant home truths. There is also a gang that is set up to take the fall over the threat of necrosis and naturally – just like in TEENAGE MUTANT NINJA TURTLES - a bomb that threatens to spread the fumes of the deadly necrosis gas, mummifying everyone in a one kilometre radius (which I am sure is an approximate threat).

As the film builds to a climax, the relationship between Shiori and Sebastian becomes more interesting. Shiori’s soul becomes Sebastian’s weakness – if she killed, he cannot collect and his service will be pointless. For Sebastian, Shiori is an object of curiosity, representing the weaknesses and strengths of humanity. Through her (at least in the eyes of the storytellers) humanity is being judged.

Now, I know what you might be thinking: can I still get VICTOR VICTORIA on demand? BLACK BUTLER doesn’t attract a Western audience’s empathy in the way that an American film does. It is exposition heavy and the action sequences are insufficiently graphic for a hardcore audience – I suspect it passes as a family film in some markets. However, it made me wonder whether Eastern audiences view Hollywood movies with the same level of detachment as I felt watching this. Sure it is visually interesting but the pace is a little slow. It doesn’t really pack a surprise since it does not raise expectations to dash them by turning in a different direction. When I watch a Hollywood film, I try (sometimes not very hard) to work out which way a plot will go. Here, I was trying to get a handle on what was going on. It gradually made more sense, but I didn’t leave the cinema thinking, ‘I want to see more films like that’ more ‘where’s my train ticket’ and ‘crikey, it’s raining’.