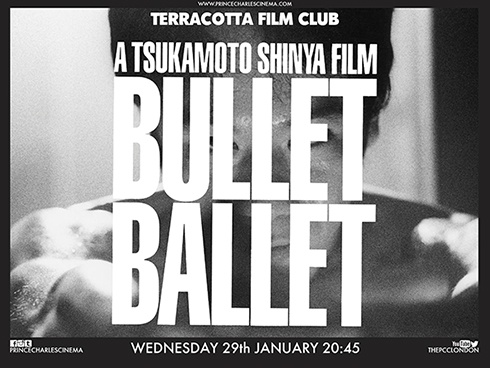 Until I saw BULLET BALLET (1998), shown in re-mastered form at London’s Prince Charles Cinema on 29 January 2014 prior to its re-release on DVD, I was unfamiliar with the oeuvre of Japanese director Shin’ya Tsukamoto. He is, by his own description, a producer, director, writer, director of photography, editor and actor. His most famous role is the villain Yatsu a.k.a the Guy in the TETSUO trilogy (TETSUO: THE IRON MAN, TETSUO 2: BODY HAMMER, TETSUO: THE BULLET MAN). His films are low budget, black-and-white and violent - but not on the evidence of BULLET BALLET excessively so -, and concerned with man and metal. The TETSUO films deal with a walking lethal weapon. In BULLET BALLET, he plays a commercials director, Goda, whose girlfriend, Kiriko (Kyôko Suzuki) is found shot dead. It is apparently very difficult to procure a gun in Japan, even illegally; the country has successfully all but eliminated gun deaths. According to a Washington Post article by Max Fisher, in 2008, when the United States had experienced over 12,000 gun related homicides, Japan only had 11. In 2006, there were only two gun-related homicides, surprising for a country of 128 million people. ‘Even gangsters live in fear of Japan’s gun laws’, says a 2013 headline from the Japan Times.

Guns are to the Japanese what Samurai swords are to the Americans, an object of fetish. Early on, we see Goda create his own quick fire montage of gun footage; he becomes obsessed with the Chief Special, a six-shooter snub nosed pistol.

Goda has to spend a lot of money in order to obtain one. Even then, he ends up with a toy pistol. He is pretty sure he knows who is responsible for Kiriko’s death, a local gang who use a young punky girl, Chisoto (Kirana Mato) as bait.

Her party trick is to stand on the edge of station platforms as a subway train approaches. Then when some friendly stranger saves him, she bites his hand and steals his wallet. Tsukamoto renders this vividly with a hand-held camera and a tight close up; Chisoto just about keeps her balance as the train rumbles ever closer. The police, it seems are powerless to stop them. Before Kiriko’s death, Goda had suffered such an attack. Interestingly, Chisoto has her own bite mark on her hand; either self-inflicted as a form of self-mortification or she herself was the victim of such an attack, which, in turn, turned her into an aggressor.

Goda finds Chisoto early on. He remembers seeing her with Kiriko. Then he falls foul of her gang, who beat him up (though he gets a few blows away himself). ‘Next time you rob somebody, make sure he isn’t strong,’ the gang’s leader tells them.

The black and white aesthetic defines Tsukamoto’s parallel world in which the shooting of Kiriko is a McGuffin. The interview by police is conducted through ellipses – cuts to black – as well we never hear the police’s questions, only Goda’s responses. There is some scepticism that she is his girlfriend – why did they never marry? On one level, the film is about the danger of being unmarried in Japan, without paying homage to the girlfriend’s father.

In this stylised vision, Kiriko has no relatives – not even uncles. Goda struggles alone. By day, he carries out his job as best he can, though a colleague notices his thing about guns. By night, having failed to procure a firearm, Goda builds his own pistol. This crude device merely stings its victims.

Her gang move from strength to strength. Goda does eventually get hold of a gun from a woman who had been watching him. She offers it to him in exchange for her hand in marriage; she is an illegal immigrant keen to regularise her status. Whether Goda marries her is unclear – we never see her again. But he gets the gun.

The gun itself does not prove to be the deliverer of justice. Goda chances upon inter-gang warfare after seeing the message ‘Chisoto must die’.  The gun is taken from him. You would expect Goda to be killed, but he lives to see the gang become even stronger through the use of his gun. But then a boxer is shot. Members of the gang are executed in response.

In the finale, Goda joins the gang, ostensibly to save Chisoto. It is clear that the bite marks actually bind them together, though in the last scene of the movie they are running in opposite directions.

Does Chisoto love Goda? Well, her gang never kills him – he seems too much of a cash cow for that. She does break into his flat and send him after the thug, Goto (Takahiro Murase) who threatens to hand his gun into the police. If he does so, Goda would never get it back. Goto has no intention of handing over the weapon. He follows a policeman who then stops him, noticing that Goto had changed his bicycle; it was not the one he saw him on earlier. Goda has to save the policeman by rushing in; a foot chase follows. Goda returns to an empty flat.

Goda never gets an answer to the question why was Kiriko killed. ‘You did it, by being selfish,’ Chisoto tells him. Goda is not a classic hero. Tough, he is nevertheless a struggling middle class man with a great apartment, but no children. We sense that Goda’s real question is ‘why didn’t she marry me?’

BULLET BALLET does not have a lot of gunplay in it. The title has a different meaning, more ballet than bullet. Boy loses girl; boy finds another girl; other girl won’t be with boy because he is too square or too old. Emotions exist beneath the surface. It is about the impossibility of love between two different worlds, the criminal and the respectable.