Film Review: EDGE OF TOMORROW – is this the most under-rated film of the summer? 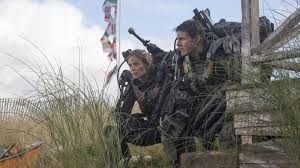 Since box-office is everything, there is no accounting for taste. 22 JUMP STREET eclipsed A MILLION WAYS TO DIE IN THE WEST at the box office and suddenly all we want are sequels. EDGE OF TOMORROW, set in the near future, had a similar fate at the box office, trounced by TRANSFORMERS – AGE OF EXTINCTION. Not everybody likes Tom Cruise – though there is no shortage of fans wanting selfies with him at his premieres. He is a star whose films focus on his prowess. Cruise’s characters post-JERRY MAGUIRE don’t go on emotional journeys out of choice, taking the audience with him. Rather, he knows who he is. He does what he must do. He does not even cast himself as the enlightener, the middle-aged sage. What you get with Cruise is square-jawed certainty. Even in OBLIVION when his character is plagued with flashbacks of his past, his journey isn’t emotional, it is cerebral. Cruise doesn’t play the kind of guy who confesses that he messed up big time. He tries not to mess up.

In EDGE OF TOMORROW, as Major Bill Cage, he goes on a reluctant physical journey GROUNDHOG DAY-style, from spokesman for the military to a warrior trying to save Britain – and mankind – from ‘mimics’, land-based squid-like creatures, that squeal through the air and kill humans with slashing talons and vicious bites. Why are they called ‘mimics’? I suspect they do accurate Tommy Cooper impressions (‘take my wife – I wish someone would’) minus the misogyny. A more likely explanation is that they mimic the behaviour of any marauding force, though they appear to be ruled by a Queen Bee squid or ‘Alpha’, who in turn reports to an ‘Omega’. If they don’t kill you first off, the Alphas can infect your blood with a wildly improbable plot device – the ability to die and relive the day. A re-set button if you will. Though based on a Japanese novel, ALL YOU NEED IS KILL, it resembles a video game. Cage has to work his way through the levels. (If you prefer, ‘mimics’ are like Pac-men.)

The early part of the film has Cage try to avoid joining the United Defence Force for an assault on the beaches of France. (He’s seen SAVING PRIVATE RYAN – obviously.) Handcuffed as a deserter and stripped of his American military rank, he is despatched into service with a battalion – more like the Dirty cross-gender half dozen – worrying about his safety. The drop is hazardous, the landing fractured. Cage sees the most over-weight of his squad crushed by the falling carrier copter and the ‘mimics’ take out large number of soldiers. One soldier, Rita (Emily Blunt), the ‘Angel of Verdun’ appears to have the edge. She too is slaughtered. It is only a matter of time before the un-coordinated, panicking Cage is slashed and killed – before he wakes up and starts the day again.

The delineations of each re-set – and it won’t surprise you that there is more than one – are entertaining to watch. Cage’s interactions with the arresting sergeant (Bill Paxton) and his squad change. Eventually, on the battlefield he gets a message from Rita - ‘find me when you wake up’ – and the whole plot begins to make a lick of sense.

Or does it? There is no way that the soldiers could understand the symbiotic relationship between the ‘Omega’ and the rest of the ‘mimics’ (‘they’re not individuals, but a single organism’) even with the help of the token mad scientist whose research was shut down (Noah Taylor).  However, I was prepared to go with it. It’s no more ludicrous than Transformers from outer space speaking English and besides - we just want to get on with the plot.

Ultimately, the film, directed by Doug Liman from an adapted screenplay by Christopher McQuarrie (THE USUAL SUSPECTS), Jez Butterworth (MOJO, JERUSALEM) and his brother John-Henry Butterworth (BIRTHDAY GIRL) is a love story in which Cage has to balance saving mankind with ensuring Rita doesn’t die. I felt towards the end that there was somewhere in there one re-set too many but the pace of the film mostly takes you with it. Unlike many recent Cruise films, which don’t have an emotional charge, this is memorable and fun.

On a more serious level, Cruise unlike Michael Bay (director of the TRANSFORMERS quartet), has his finger on something. EDGE OF TOMORROW is symptomatic of America’s non-interventionist Democrat foreign policy. Cage is the non-interventionist in action. America will give arms, expertise and help mobilise forces through NATO, but it won’t go to war without a United Nations mandate (and perhaps won’t be zealous enough about seeking one, knowing it got her fingers burned on Afghanistan and Iraq). The film uses the analogy of World War Two, and makes several references to it including in a scene in a London pub (I wasn’t sure how Cage got there, but never mind) to show how America might be motivated to find something to fight for, specifically a nostalgic urge to struggle with the underdog. (There’s no Pearl Harbour here.) America will defend Britain, the film seems to say.

Do we believe it? Some of us remember the 1981 Falklands War and that argument doesn’t wash – the ‘special relationship’ is historically very selective, especially when national interests don’t coincide.

EDGE OF TOMORROW is the third of Cruise’s alien invasion trilogy (after WAR OF THE WORLDS and OBLIVION). It’s the Scientologist in him that draws him to the subject. (Remember BATTLEFIELD EARTH, John Travolta’s ill-thought foray into the genre? Best not.) Cruise’s philosophy is entirely about self-actualisation, doing well yourself rather than relying on others. He’s not one to ‘take one for the team.’ This is precisely why he is at odds with popular taste. The latest TRANSFORMERS film stresses the primacy of family and the extent to which it should be defended. Cruise hasn’t got there. It is no surprise that his most successful films are the MISSION: IMPOSSIBLE franchise where his team is a virtual family. This ought to tell him something.

Reviewed at Cineworld Shaftesbury Avenue, London, Monday 7 July, 18:20 screening (quite close to some of the locations of the film, Trafalgar Square and Horseguards Parade)