Film Review: FADING GIGOLO: not so much stud muffin as stuff missing 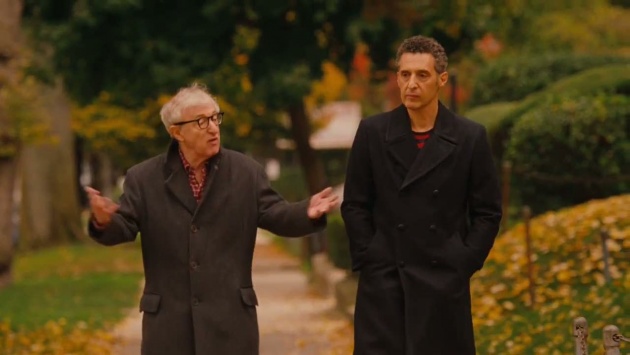 In FADING GIGOLO, John Turturro displays a curious characteristic for an actor-turned-movie director – a lack of enthusiasm. He delivers lines like ‘how long have we been friends?’ to his unlikely co-star Woody Allen as if he can scarcely believe that he has ever even had friends. We first encounter his character Fioravante in the bookstore of Murray (Allen) as the aged man is about to liquidate his business, dwarfed by an adjacent Staples store. (Murray’s bookstore makes you think of the Little house in STUART LITTLE, minus the sarcastic cat.)  For a man giving up his livelihood, Murray is semi chipper, as his dermatologist mentioned to him earlier that day that she was interested in a threesome. The conversation alleged to have happened is so unlikely it is only when we discover that the woman in need is played by Sharon Stone that it becomes semi-believable. At any rate, the former vendor of rare books says he might know someone who might be appropriately inclined, even if that someone is Fioravante himself.

The contrast between Allen and Turturro’s acting styles is so wide that it would probably feature on an Ordinance Survey map. Allen, of course, has a familiar style: he’s Danny Rose going into the pimping business, though slightly slower in speech than he was thirty years ago.  Turturro is insular. As director he films himself head-down, arranging flowers. Fioravante lived his mother for many years. Now that she has passed away, he lives alone, bereft of even the possibility of connecting with another human being. Fioravante has no sense of himself as a sexual being, which is strange and a little unlikely; you keep waiting for the back story but of course there is no one to tell it to.

The offer of $1,000 is too much for Fioravante to turn down, but then the film breaks character; Fioravante is moderately good in the sack, at least by the dermatologist’s exacting standards, having insisted on a taster session. You wonder whether Fioravante lost his virginity to the woman, but in the after-sex conversation it seems unlikely. Murray manages to find more customers for him, including an Orthodox Jewish widow (Vanessa Paradis), still mourning the loss of her husband.

Turturro isn’t that interested in the male prostitution plot; he’s not so much Deuce Bigalow, as ‘acting career, there I go!’ He is more interested in the Orthodox Jewish police force, the so-called Neighbourhood Watch, embodied by Liev Schrieber, a Watchman who is in love with the widow.

Far from trying to make a faux Woody Allen movie, Turturro puts Allen face to face with Orthodox Jews; this you sense is the raison d’être, and it certainly accounts for the only funny scene in the movie, when Murray is surrounded: ‘was it something I ate?’ He also situates Murray in the middle of an African American household, where he is the kindly tenant uncle figure, teaching kids to play baseball. (You figure this isn’t such a stretch for Allen the noted sports fan.) One of the surprises is the good shape Allen is in; we see him climb a flight of stairs without difficulty and you think to yourself, ‘I have never seen Woody Allen climb a flight of stairs in a movie before, or even be photographed from behind’.

The jazz on the soundtrack comes from the 1950s than the 1930s; there is an acknowledgement of the generational difference between the two stars; the film’s signature tune, and one that best defines it’s mood, is ‘Sway’, which as far as Allen is concerned passes for popular music outside of his appreciation level; for Turturro it’s fine.

Turturro, who really hams it up when collaborating with the Coen Brothers (as Jesus in THE BIG LEBOWSKI, especially) trades on his own insecurities. Fioravante explains to the widow how as a boy he would look at young women straight on so as to hide his hooked nose. He leads her to commit a breach of modesty. For his part, he falls in love.

Featuring Sofia Vergara in a role that is designed to showcase her voluptuousness, FADING GIGOLO is partly about the importance of fidelity to tradition, though this idea is played out with a co-star who makes friends outside of the Jewish community. The ending is clunky; close-ups of Allen and Turturro. Will Murray’s ‘Dan Bongo’ and Fioravante’s ‘Virgil Howard’ go back in business together; there is the half-hearted promise of a sequel through a pair of cracked smiles. The film scarcely passes muster as a comedy; it has an air of resignation.