Film Review: FRUITVALE STATION: An unlawful shooting, but what is the film really saying? 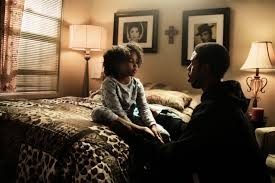 Anyone going to see FRUITVALE STATION, the Sundance 2013 Award-winning movie written and directed by Ryan Coogler, will know the ending before they go in. The film depicts the events leading up to the unlawful manslaughter of Oscar Julius Grant III, a twenty-two year-old African-American male on the platform of San Francisco’s Fruitvale Station in the early hours of January 1, 2009, that subsequently sparked rioting in the Bay Area. For British audiences, there are two comparatively recent events that give the story resonance, most recently the shooting of Afro-Caribbean suspect Mark Duggan by police in North London’s Tottenham area in the summer of 2011, which inspired rioting and looting that went way beyond the local area – opportunism rather than indignation being the driver for much of it, with reports of individuals parking cars outside local supermarkets waiting for others to smash windows before they would go in and steal stuff. Before then, there was the fatal shooting on 22 July 2005 of the Brazilian student Jean-Charles De Menezes on the platform of Stockwell Underground Station, mistakenly identified as a terrorist suspect in the aftermath of the bungled 21 July attempt to bomb four stations on London’s tube network. In both tragic cases, there was an element of operational duress as well as incompetence and excessive use of force; these were collectively interpreted as racist. FRUITVALE STATION also depicts an event in which operational duress, incompetence and excessive use of force come into play, undoubtedly interpreted as racist.

Let me be clear right off the bat that there is no excuse for the killing of Oscar Grant. Coogler’s film makes abundantly clear that his actions were not provocative enough to warrant the use of firearms. He was unarmed and handcuffed; he stood up for his companions. Coogler shows him as the only male in his group who hid from the police initially, but then he had what the American justice system calls ‘priors’. He had served jail time for drug dealing and was naturally worried that being involved in an altercation on board a train as he was, he was looking at going back inside.

Oscar is played in the film by Michael B. Jordan, an actor who isn’t exactly physically threatening – in the six-pack stakes, he is a three-and-a-half; this writer is a ‘one’ – the suggestion of a muscle is in fact a defibrillator - so he is in better shape than me. He has a temper on him and is prepared to stand up to bigger guys, but he’s not Ving Rhames or ‘Rampage’ Jackson. Coogler’s film is set over twenty-four hours and establishes Oscar as morally compromised; when he tries to have sex with his girlfriend, Sophina (Melonie Diaz), the mother of his child, she reminds him he was previously unfaithful. Coogler establishes Oscar as a loving father, letting his young daughter Tatiana (Ariana Neal) share the family bed when she complains of being scared. When Sophina refuses to give her a sugary snack to include in her lunchbox, Oscar sneaks one out; it’s their secret.

This is not the only secret Oscar harbours; he has been fired from his job at a fish stall. Moreover, he is shown having a bag of marijuana that he could sell. But Oscar wants to turn a new leaf; Oprah says it takes 30 days to form a habit and Oscar (in the movie) wants that to start now. First, he drops Sophina off for work on time – he lost his own job for being late. Then he phones his mother, Wanda (Octavia Spencer) on her birthday and promises to bring over marine produce for the party. He visits the stall where he worked to get it and asks his former boss for his job back. He says reasonably that he has hired someone else, someone who is on time. Then Oscar threatens him, pushing the guy. We have no idea if Oscar will follow through but he doesn’t win our sympathy. In the same scene we also see him intervene in a sale to a young Caucasian woman, Katie (Ahna O’Reilly) wanting to prepare a fish fry for her boyfriend. We wonder what Oscar’s motivations might be; is he trying to pick her up? He phones his grandma, who when he tells her he’s at work, wants to put down the phone. (‘No, grandma, it’s my day off,’ he reassures her.) He then hands his cell phone to Katie, who explains her predicament.

From this, we interpret that Oscar is basically a good guy. There’s more. When Oscar stops for gas, he gets friendly with a stray dog – by which I mean a Hollywood stray dog, more Lassie than Cujo. ‘Come here boy, good dog!’ He gives that dog a right old tickle behind the ears, know what I’m saying. A real, ‘who’s a good boy’ nose-tip to nose-tip. Prime muzzle-nuzzle. Oscar isn’t worried about dog breath or sharp teeth. The dog on the other hand – well, he runs into the road and gets hit by a car. Oscar calls to the driver responsible and takes the dog to the curb, his shirt covered in blood.

I don’t know about you, but that scene is a bit much!

We see Oscar texting whilst driving – did he hit that dog in real life – with the messages appearing on screen. His mother tells him to drive hands free – he has to put on the woolly hat and lodge the phone between hat and ear. He also arranges to sell the bag of weed. He has money problems. The rent is due January 1. His sister wants a loan of $300 for her rent. There isn’t any low income housing support in the US – at least on a state level.

However, Oscar remembers his past, December 31 2007, when his mom visited him in the penitentiary. The visit started well, though Oscar won’t describe how he got the bruise on his face. His mom is telling him how Tatiana asked for dark butter on her popcorn. ‘What’s dark butter?’ Well, when daddy ordered popcorn at the movies, he asked for light butter, so Tatiana wanted to try dark butter. ‘That kid is smart’. Then another (white) prisoner comes in, calls Oscar a snitch. It’s testosterone time! Cursing ensues. Oscar’s mom leaves; she won’t visit him again. The scene is well-constructed until, as Mom walks away, Oscar begs for a hug and gets beaten back by guards. Mother never turns round. Not at all, even when Oscar is obviously assaulted!

I don’t know about you, but that scene is a bit much!

Oscar dumps the weed into San Francisco bay – those fish must be really laid back as a result: ‘how about that – a hook with some bait?’

Not only does Oscar not make the sale, but he gives the guy a free roll-up cigarette.

The film is ladled with sentimentality, notably at Mom’s birthday party, which Oscar does not spoil by revealing he is unemployed.

Earlier, getting changed at Sophina’s mother’s house – and her mother is depicted unsympathetically, refusing to look after Tatiana on New Year’s Eve (‘ask your sister’) - Oscar tells her the truth. She’s mad, but then they also make love, because the point is, honesty pays.

They go to the city centre by metro with Oscar’s friends to see the fireworks, jumping the gates. Whatever happened to honesty pays? This is presented as a victimless crime. For the record, in London, tube and bus travel after New Year’s fireworks is traditionally free, because who wants to collect fares from a bunch of drunken people?  (A drinks company normally sponsors it.)

As you might expect, the girls in the group experience a bathroom emergency. Oscar offers a store-owner his last ten dollars to let them use it. It is clear that the store owner is suspicious but allows two girls go through. Then there is a white guy with his pregnant wife. She needs to go too. While the guys wait, Oscar talks to the married man who is grateful for his intervention and offers him his card. All three women come out at the same time within the space of two minutes. I’m not entirely sure that this is realistic either. The scene is constructed to demonstrate that Oscar has prospects – an opportunity to start again (the white guy is a web designer). This puts the tragedy in relief.

Finally, we have the subway trip home and wouldn’t you know Katie, the young woman who cooked her boyfriend a fish supper is also on board – and then they went out to see the fireworks, what happened to food being an aphrodisiac? Not only that, someone from Oscar’s past is in the same crowded carriage.

The coincidence is too hard to take. I don’t know how much of this is rooted in fact, but it doesn’t feel realistic. This makes a mockery of what happens next.

Coogler’s staging of the last part of the movie is extremely competent; there is a cut from a flashback of Oscar with Tatiana to a blood bag being dropped down that is really effective. As a climax, its emotional manipulation is first-rate.

But what is FRUITVALE STATION saying, and why did it leave such a nasty aftertaste? It says, no matter how hard you try to put your life in order and acquire new good habits, if you are African-American, the system will let you down. A white killer will be released in eleven months for shooting a black man. That cannot be right.

If the point of FRUITVALE STATION is to get justice for Oscar, the story would have been told differently, perhaps from the point of view of Bay Area Rapid Transit (BART) Police. The film tries to present Oscar as a basically innocent victim but does so in unverifiable ways that make you distrust it.

The film acknowledges there is a gun crime in the neighbourhood where Oscar lives; Tatiana complains of hearing guns outside. When you look closer at the details, you get a mixed picture. Certainly, according to at least one travel website, the Oakland area of San Francisco was synonymous with gangland violence, though gun-related fatalities are in single figures. 182 crimes were reported on the BART system in 2008, again a relatively small number when you consider the pick-pocketing that takes place on London Underground. So you wonder what formed the basis of BART Officer’s response. The film isn’t about him. Rather it is trying to make a more general point: that even though an African American was elected President of the United States, not much has changed. Isn’t that rather easy to say?

Oscar Grant’s mother received a settlement of $1.3 million from BART, but this is hardly the point. There is still a struggle for justice; we see the real Tatiana at a protest on New Year’s Day 2013 (interestingly, not Sophina). The parallel with the De Menezes killing is palpable, but I left the screening not trusting the filmmakers’ motives.

Johannes Mehserle, the BART officer convicted of killing Oscar is depicted under a pseudonym.

i need friend here to join me and chat with me…

You both are legends

You both are legends that gives a lot of inspiration for many generations of cross-country, providin…